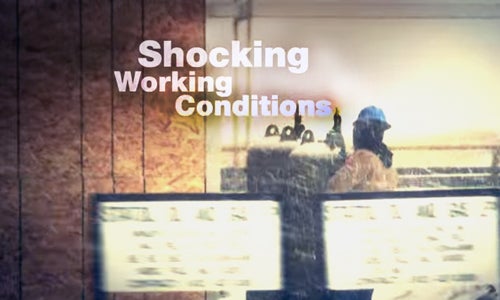 The explosion in drilling for oil on the Bakken Shale in North Dakota has been seen by many as a threat to the environment and the safety of oil workers. There have been concerns over radioactive waste contaminating local water, oil spills, crude by rail fiery explosions and even sex trafficking. Now, Al Jazeera America is looking into how North Dakota became the number one state for worker fatalities.

Part of Al Jazeera America’s current affairs documentary series, Fault Lines, Death on the Bakken Shale gives viewers a glimpse into the working conditions of oil drilling operations and exposes why North Dakota has the highest worker fatality rate in the U.S., according to a report by the AFL-CIO. Forty-four workers died in North Dakota in 2011, producing a rate of 17.7 deaths per 100,000 workers. That is more than five times the national average of 3.5 deaths per 100,000 workers. Add to that the fact that between 2009 and 2013, there were more than 9,000 claims of injuries filed by oil and gas workers to North Dakota’s Workforce Safety and Insurance Agency.

Death on the Bakken Shale focuses on three oil workers who lost their lives on the job. Many workers are very inexperienced and not properly trained before engaging in high-risk activities. Bill Wuolu, training director for the nonprofit North Dakota Safety Council, says “what we’re getting is workers that are doing jobs that they’re not trained, skilled or maybe even qualified for.”

Josh Rushing, the Al Jazeera correspondent who worked with a team to produce the program, says there are two main reasons the state is facing a worker crisis: “Carelessness among the companies operating in North Dakota’s shale region,” and “a state government that is failing to protect workers in hazardous occupations and that is beholden, financially, to the industries it is supposed to regulate.”

“Workers and their survivors have little recourse because the state of North Dakota generally prohibits workers from suing their employers for negligence,” said Rushing. With so many of the workers from out of state, it’s hard to have accountability because the state government “has no political responsibility” to all of these out-of-staters, according to Rushing. Governor Jack Dalrymple is the effective head of the worker’s compensation system and the Public Service Commission, which regulates the oil and gas industry. Rushing believes that “the oil industry’s generous contributions to Dalrymple’s campaigns” is the reason why the governor is failing to address the worker crisis.

Dalrymple is not too alarmed by the statistics. In a statement to Al Jazeera America, he said “We believe we have an effective strategy whereby we focus on employee and worker education, safety training and incentives to operate safe work places. Occupational Safety and Health Administration (OSHA) plays a critical role by enforcing federal safety laws, and OSHA officials have said they may add additional resources in North Dakota if they see the need.”

The program aired for the first time last night. It will re-air Jan. 17 at seven and again at 10 p.m. You can find the full schedule here.