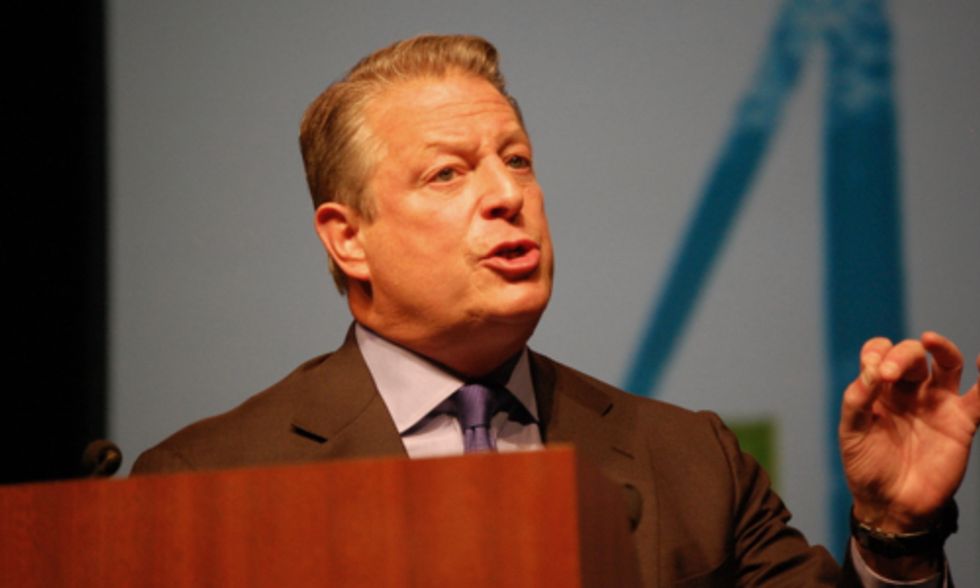 Al Gore has written an important article, “The Turning Point: New Hope for the Climate,” published June 18 in Rolling Stone magazine. The subhead of the article: “It’s time to accelerate the shift toward a low-carbon future." It’s a comprehensive piece whose primary point is that the clean energy forces are winning: “We are witnessing the beginning of a massive shift to a new energy-distribution model—from the ‘central station’ utility-grid model that goes back to the 1880s to a ‘widely distributed’ model with rooftop solar cells, on-site and grid battery storage, and microgrids.”

Coal, oil and gas, Gore believes, are in deep trouble, while wind and solar are growing rapidly, in large part because of the major drop in prices for them that the world has seen over the past half-decade or so.

Al Gore at Power Shift 2011 in Washington, D.C., where he was a first keynote speaker. Photo credit: Wikimedia Commons

Gore seems to be coming down firmly against all fossil fuels, not just coal and oil. Here’s what he has to say about shale gas drilling and fracking: “This year, Citigroup reported that the widespread belief that natural gas—the supply of which has ballooned in the U.S. with the fracking of shale gas—will continue to be the chosen alternative to coal is mistaken, because it too will fall victim to the continuing decline in the cost of solar and wind electricity.”

Gore sees the need for government to intervene if this shift is not to slow down: “We have the policy tools that can dramatically accelerate the transition to clean energy that market forces will eventually produce at a slower pace. The most important has long since been identified: We have to put a price on carbon in our markets, and we need to eliminate the massive subsidies that fuel the profligate emissions of global-warming pollution.”

He concludes by giving this response to the very big question: are we too late? “Is there enough time? Yes. Damage has been done, and the period of consequences will continue for some time to come, but there is still time to avoid the catastrophes that most threaten our future. Each of the trends described above—in technology, business, economics and politics—represents a break from the past. Taken together, they add up to genuine and realistic hope that we are finally putting ourselves on a path to solve the climate crisis.”

Gore is not the only person who has been saying or writing along these lines in the last year or so, but for someone of his stature to do so is no small thing, and he has done a very good job of putting information and analysis together in a readable, accessible format. For him do so now, to give people around the world hope that we can eventually replace fossil fuels with renewables based primarily on very concrete developments in the world’s energy systems, is a real morale boost.

Saying that, I do have reservations about some of what he has written.

I’m in the midst of organizing towards the first-ever national march against fracked gas exports, happening July 13 in Washington, D.C. The call is to stop fracked gas exports at Cove Point and beyond. Instead of expanding fracking via the building of export terminals to ship gas to Asia and Europe where prices are higher, we are calling for a halt to the gas rush and a renewables first energy policy.

I hope Citigroup’s projection about wind and solar preventing the rise of gas as an alternative to coal is accurate, but I question if that is the case right now. The Federal Energy Regulatory Commission (FERC) is currently processing 14 proposals to build export terminals along U.S. coastlines. Two have been approved so far, with a Cove Point approval in a couple months a distinct possibility. The Obama Administration, at the same time that it is proposing carbon regulations for power plants and President Obama is giving stirring speeches about the need for action, continues to publicly support the dramatic rise on his watch of U.S. oil and gas production, and they continue to take steps to advance the export of fracked gas, coal and oil from the U.S.

This leads to my second main reservation. Although Gore mentions the divestment movement and the importance of citizen activism, reading this article it would be easy to believe that the primary reason for these hopeful developments is the drop in the prices of solar and wind without a reference to the work that climate activists have done over the last decade or so. Thanks in no small part to their work, there are state Renewable Energy Standards in about 30 states that mandate a growing amount of renewable energy in a state’s power generation, a definite factor in the growth of renewable use. The climate movement through its grassroots organizing, its actions and demonstrations, its work with the media and more has built broad-based political support for the shift to wind and solar. And the movements against mountaintop removal and new coal plants, the tar sands and their pipelines, fracking and offshore oil and gas drilling have showed staying power and won victories.

Given the power and wealth of the fossil fuel industry—three of the five largest U.S. corporations are oil and gas companies, and five of the 10 internationally are—we can’t slacken up with the absolutely essential movement-building to fight their power over not just Republicans but Democrats in Washington.

Finally, about “democratic capitalism,” which Gore briefly references both to support the need for more democracy and for reforms of capitalism given the “corruption of the system by obscene amounts of money” and “growing levels of inequality worldwide.” It is good to hear him making these calls for such reforms, but it seems to me that since it is big business capitalism, the system which dominates the world, which has a great deal to do with the mess we are in, we need to be open to considering other possibilities.

I’m reading Thomas Berry’s The Great Work. At one point he calls for the world to “move from our human-centered to an Earth-centered norm of reality and value. Only in this way can we fulfill our human role within the functioning of the planet we live on. We might begin [to achieve this] by recognizing that the life community, the community of all living species, including the human, is the greater reality and greater value. The primary concern of the human community must be the preservation and enhancement of this comprehensive community, even for the sake of its own survival.”

It seems to me that, as we prioritize a rapid shift away from fossil fuels, we must also be about building alternatives to the dominant values and institutions based on greed, me-first and power-over-others. We need new ways of doing business, making government decisions and working and living together that move in the direction Berry calls for. Fortunately, from what I can see, that work, particularly on local levels, is well underway, also.

There is, indeed, future hope.