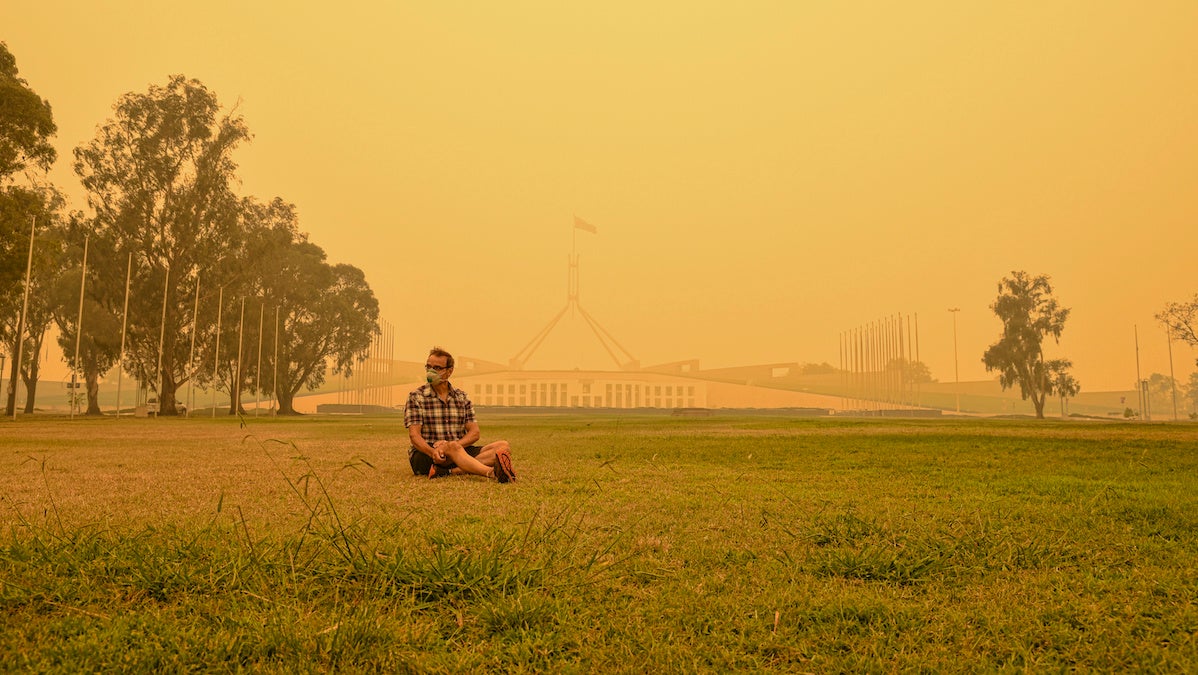 A man wearing a protective mask sits on the lawn in front of the Australian Parliament house in Canberra, Australia on Jan. 1, 2020. The level of air pollution in Canberra is the highest in the world on some days. Daniiielc / iStock / Getty Images Plus

Researchers now say there is “no safe level” of air pollution exposure after a large-scale study found a correlation between exposure to fine particle matter, known as PM2.5, and cardiac arrests, according to the The Sydney Morning Herald.

The researchers found that exposure to PM2.5 that even fell below global standards was hazardous, suggesting that tighter regulations and cleaner energy is required, according to the study, which was published in the journal Lancet Planetary Health.

Scientists from the University of Sydney led the study, which analyzed air quality in Japan against 249,372 cases of out-of-hospital cardiac arrests. They concluded that even low-level exposure was associated with an increased risk of cardiac arrest for people over 65, as The Sydney Morning Herald reported.

The researchers noticed that the risk of cardiac arrest grew by up to 4 percent for every increase of 10 units in the PM2.5 levels.

“Our study supports recent evidence that there is no safe level of air pollution — finding an increased risk of cardiac arrest despite air quality generally meeting the standards,” said report author professor Kazuaki Negishi from the University of Sydney School of Medicine, as The Canberra Times reported.

Negishi pointed out that previous research into air pollution and acute cardiac events had been inconsistent, particularly at PM2.5 levels that met the World Health Organization guidelines. However, the large scale of this study meant that past inconsistencies could be addressed.

“Out-of-hospital cardiac arrest is a major medical emergency – with less than one in 10 people worldwide surviving these events – and there has been increasing evidence of an association with the more acute air pollution, or fine particulate matter such as PM2.5,” said Negishi in a University of Sydney statement. “We analyzed almost a quarter of a million cases of out-of-hospital cardiac arrests and found a clear link with acute air pollution levels.”

The findings are troubling for Australia, which has seen its usually pristine air plummet in quality due to the recent bushfires. In the study, more than 90 per cent of out-of-hospital cardiac arrests occurred at levels below the Australian standard of 25 micrograms per cubic meter. Put another way, the air quality levels ranked as “fair,” “good” or “very good” under Australian standards, as the The Sydney Morning Herald reported. The U.S. and Japanese standard is less strict at 35 micrograms per cubic meter.

Australia had a particularly awful year, with air quality in Canberra ranking as the worst in the world on Dec. 31. Sydney had 81 days of hazardous, very poor or poor air quality in 2019, which was more days of bad air than the last decade combined, according to The Sydney Morning Herald.

The researchers expect the worsening air quality will lead to more heart attack fatalities in Australia, especially among older people.

“Given the fact that there is a tendency towards worsening air pollution – from increasing numbers of cars as well as disasters such as bushfires – the impacts on cardiovascular events, in addition to respiratory diseases and lung cancer – must be taken into account in health care responses,” said Negishi in a university statement.

Unfortunately, the researchers did not identify a threshold that is safe for exposure to PM2.5. Instead, Negishi said that existing standards should be reevaluated.

“It might not be a good idea to continue to seek [a new] threshold, but try to continuously improve our air quality. If a threshold exists, it should be very, very close to zero,” Negishi said, as The Sydney Morning Herald reported.