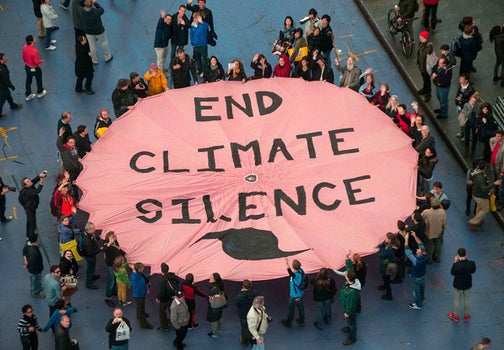 A big crowd of volunteers joined 350.org in Times Square yesterday afternoon to unfurl a giant parachute with the message “End Climate Silence” and an image of a hurricane.

“Meteorologists have called this ‘the biggest storm ever to hit the U.S. mainland,’ which is a reminder of how odd our weather has been in this hottest year in American history,” said 350.org founder Bill McKibben. “But mainly it’s a reminder of how much we need to take care of each other when disaster strikes—we hope everyone will pitch in with the Red Cross, and with local relief efforts. Community is our greatest source of energy, and our cleanest!” 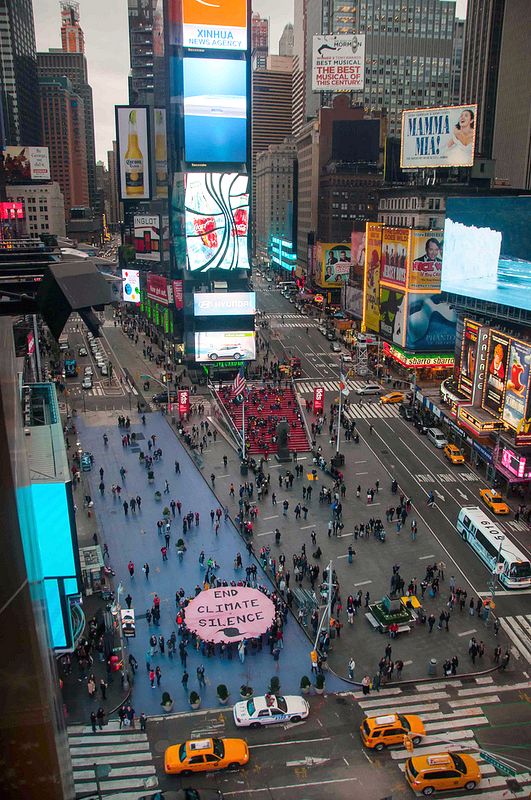 As Hurricane Sandy barrels down on the East Coast, scientists are connecting the dots between increasingly extreme weather and global warming. Yet for most of this year’s presidential election, the words “climate change” have gone unmentioned. The issue was not raised in a presidential debate for the first time since 1988.

Scientists warn that climate change is loading the dice for extreme weather events like Hurricane Sandy. The Earth’s average global temperature has risen between 1.5 and 2 degrees Fahrenheit over the past century and the warmer temperatures mean that the atmosphere holds about 4 percent more moisture than it did in 1970, leading to greater rainfall. 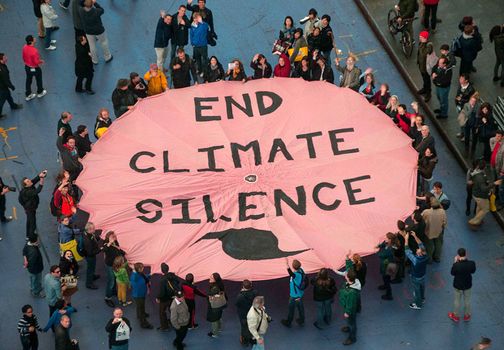 According to leading hurricane tracker and weatherman Jeff Masters, water temperature in the mid-Atlantic this year is 5°F warmer than average, allowing hurricanes to travel farther north and contributing to “an unusually large amount of water vapor available to make heavy rain.”

The recent string of extreme weather events—especially the drought, heat wave, and wildfires that ravaged much of the U.S. this summer—is making Americans more concerned about climate change. According to a recent report by the Yale Project on Climate Change Communications, 70 percent of Americans now say they believe global warming is a reality, the highest level since 2008.

This Nov. 7, 350.org is launching a 20-city nationwide tour called “Do The Math” to connect the dots between extreme weather, climate change and the fossil fuel industry, which is not only driving climate change but blocking the clean energy solutions that could solve the crisis.