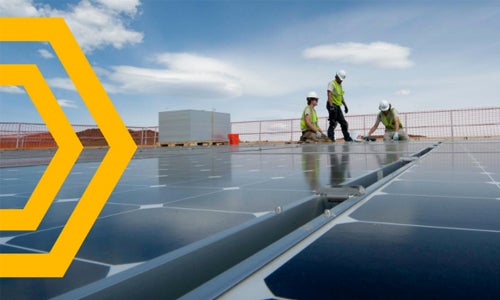 Few states in the U.S. seem more ideal for solar energy generation than Arizona. With close to 300 or even more sunny or partly sunny days on average each year in most of the state, there’s no lack of the essential ingredient. 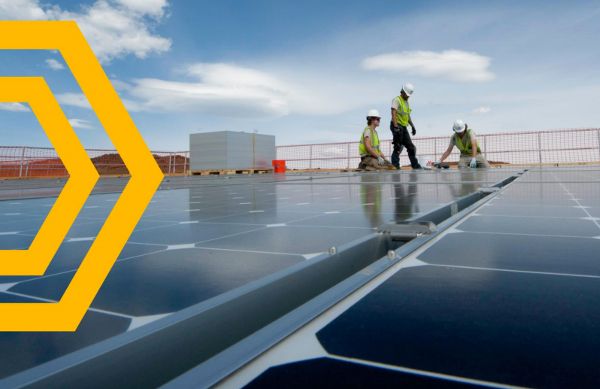 Arizona’s employment in the solar power sector is the third largest in the country/ Image credit: The Solar Foundation

And the Arizona Solar Jobs Census released by The Solar Foundation yesterday shows that solar is providing jobs by the thousands in the state, with a total of nearly 9,20o including 600 created in the last year. That puts it third in the nation, behind California—by far the national leader with 54,700 jobs—and Massachusetts, with 9,400 jobs. Arizona solar employers believe the number could climb to more than 11,000 by the end of 2015.

“This is a welcome reversal from 2013, when we found solar employment in the state down by approximately 1,200 workers,” said Andrea Luecke, president and executive director of The Solar Foundation. “While there is much to be desired in terms of support for increased use of the technology, the Arizona solar industry is optimistic, expecting to increase the number of jobs by more than 21 percent over the next twelve months.”

“Today’s findings confirm what we know all along: solar is here and is ready to power our homes and our economy,” said Brandon Cheshire, founder and director of production at the Phoenix-based SunHarvest Solar. “With enormous clean energy potential, the growth in solar jobs in Arizona demonstrates the vast potential we have to transition from coal to clean energy here in the Valley of the Sun. Rather than putting up barriers to this important progress, utilities should move forward with a clean energy transition.”

There’s the rub—the barriers. The Solar Foundation’s Arizona Solar Jobs Census paints a picture of enormous potential. According to Environment Arizona, Arizona has the potential to produce more than 320 times the state’s energy needs from solar power, including rooftop installations. But in the several years, the state’s major power company Arizona Public Service Company (APS) has been lobbying state legislators and regulators to penalize those who install rooftop solar photovoltaic panels. In November 2013, the state granted it a small surcharge of 70 cents per kilowatt hour on solar owners, less than it had been seeking. 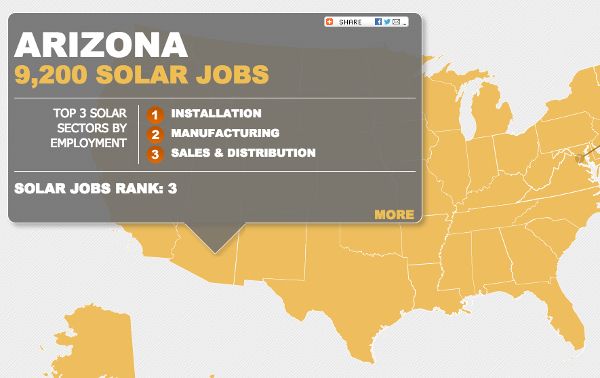 “In 2013, APS led the assault to weaken Arizona’s net metering policies by proposing a new $50-$100 surcharge on rooftop solar installations in the state,” said the Sierra Club. “The proposed solar fee was opposed by a diverse coalition of organizations including conservative organizations, clean energy businesses, environmental advocates and many other groups.”

In addition, the state’s second largest utility company, the Salt River Project, is currently proposing a package of rate changes that could increase the utility bills of solar customers by about $50 per month. APS has also been advocating for a property tax on leased solar panels, which comprise about 85 percent of the state’s new solar installation and can make solar panels more affordable for the average homeowner.

“With the growth of leasing programs that allow building owners to acquire rooftop solar at little to no upfront cost and without ownership responsibilities, rooftop solar is booming and utilities’ lost revenues are becoming noticeable,” wrote GreenTechMedia.

The Solar Foundation’s report points to legislative and regulatory uncertainty as one of the things that could impede the growth of solar.

“A recurring theme in the National Solar Jobs Census report series is the importance of policy stability at the federal and state levels,” said The Solar Foundation. “With the wide variety and ever-evolving nature of the policy changes facing it, one would be hard pressed to find a better solar-specific example of the importance of such stability than Arizona. Whatever the ultimate outcome of the various proposals currently under consideration at the state and local government and utility levels, companies across the state would receive at least a small benefit from having these issues laid to rest once and for all, providing them with the policy certainty they require to plan for future business and employment growth.” 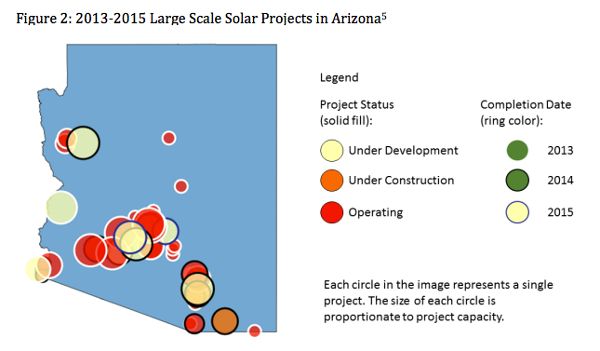 Arizona has plenty of sun, and solar energy projects take advantage of that. Image credit: The Solar Foundation

Community and environmental activists have pointed to the growth of solar providing great opportunities for the state to transition to clean energy from APS’s Cholla coal-fired plant near Joseph City. The company has already announced plans to phase out three units at Cholla by the mid 2020s, including one it will phase out next year. But they’ve indicated that they will move to natural gas rather than clean, renewable technologies.