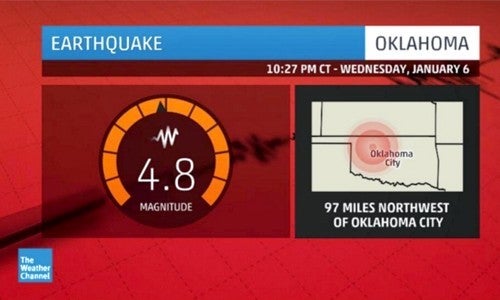 The state of Oklahoma was rocked by more than 70 earthquakes last week. Two of the largest quakes measured magnitude 4.7 and 4.8 and struck in the rural northern part of the state, beneath a major oil and gas producing area. The week before that, the state was hit by a dozen tremors in less than a week, prompting the Oklahoma Corporation Commission, which regulates the state’s oil and gas industry, to order several injection well operators to reduce wastewater disposal volumes.

Scientists have linked this ongoing spate of tremors to the state’s drilling boom. The Oklahoma Geological Survey concluded that the injection of wastewater byproducts into deep underground disposal wells from fracking operations has triggered the seismic activity in the state.

In November 2015, the Oklahoma Corporation Commission reported that Oklahoma now experiences more earthquakes than anywhere else in the world. Oklahoma went from two earthquakes a year before 2009 to two a day. Prior to the state’s fracking boom, it averaged 1 to 2 earthquakes of a magnitude 3 or higher per year. By 2009, that number rose to 20. By 2013, it jumped to 585. And, according to Thom Hartmann of The Big Picture, data from the U.S. Geological Survey shows that in 2015 Oklahoma experienced 881 earthquakes of a magnitude 3 or higher—that’s an average of nearly three per day.

Oklahoma’s uptick in tremors in just the past few years is staggering https://t.co/kO7WwIh84V @Frack_Off @NatalieMerchant

Between 2013 and 2015, “Oklahoma experienced a yearly average of 733 earthquakes, which is a nearly 39,000 percent increase from the 40-year average before 2008,” Hartmann said. A seismologist at the National Earthquake Information Center called it “almost a millennium’s worth of earthquakes in two years.”

Watch Thom Hartmann of The Big Picture discuss with Tyson Slocum of Public Citizen’s Energy Program whether this could be the wakeup call America needs to ban fracking once and for all: