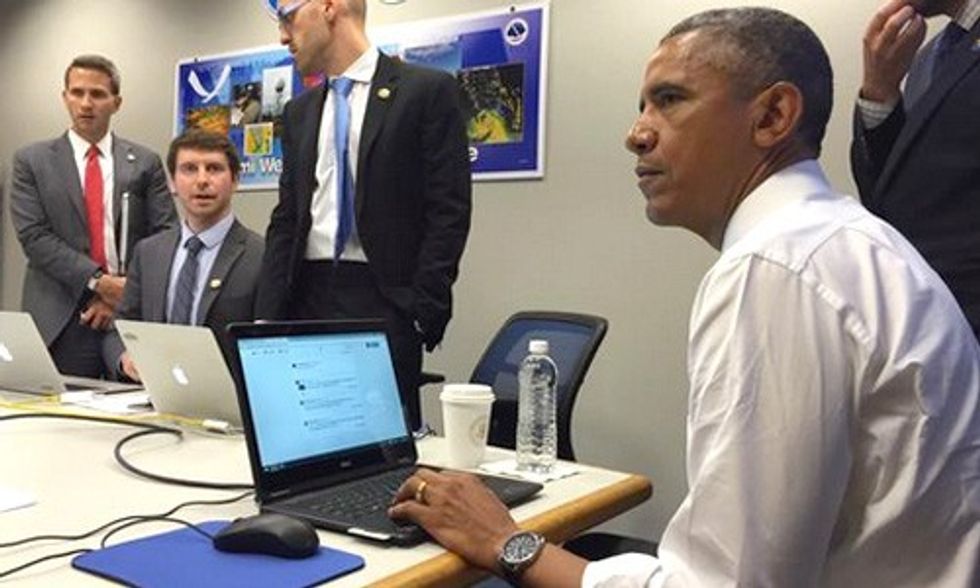 Ready to answer your questions on climate change. Let's do this! #AskPOTUS pic.twitter.com/5KrIb5jL6S

He opens with some advice on how to take on climate denial in Congress.

.@calebmegajew the science is overwhelming but what will move Congress will be public opinion. Your voices will make them open to facts. — President Obama (@POTUS) May 28, 2015

The president even took on the controversial topic of Arctic drilling, which he has been called out for supporting despite his concern about climate change. He got more than 30 questions about Arctic drilling, according to The Washington Post.

@POTUS Why are you allowing oil drilling in the arctic if you are concerned about climate change? #AskPOTUS — Ben Alexander (@BigBennyFL) May 28, 2015

Responding in three tweets, POTUS explained how he has shut off the most sensitive areas of the Arctic to drilling, including Bristol Bay. Also, in April the Obama administration dedicated most of Alaska’s Arctic National Wildlife Refuge as wilderness, preventing drilling across roughly 12 million acres of northeastern Alaska, reports Think Progress. But, ultimately, President Obama thinks Arctic drilling can't be stopped completely.

@BigBennyFL 1/ We've shut off drilling in the most sensitive arctic areas, including Bristol Bay.

The president also took the opportunity to show he's a fan of the pope and his stance on climate change.

.@drock89 as @Pontifex and other religious leaders have stated we have a moral obligation to the most vulnerable and the next generation. — President Obama (@POTUS) May 28, 2015

He also explained how climate change is a national security threat.

He hit on how much we've expanded renewable energy, but cautioned we need more research and development and regulatory incentives to keep growing the sector.

He even talked about how to approach the subject of climate change in a classroom setting.

And when asked if big polluters like China and Brazil should be doing more, he said we should all be doing more and the U.S. should be taking the lead.

.@ZCarlander agreement with China big and will be working w Brazil to develop their plans. We will all need to do more with US leading