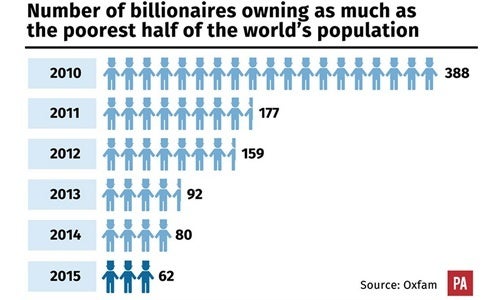 A mere 62 people own the same amount of wealth as the world’s poorest 3.6 billion people, according to an Oxfam report published on Monday. This number has fallen dramatically from 388 as recently as 2010 and 80 last year. 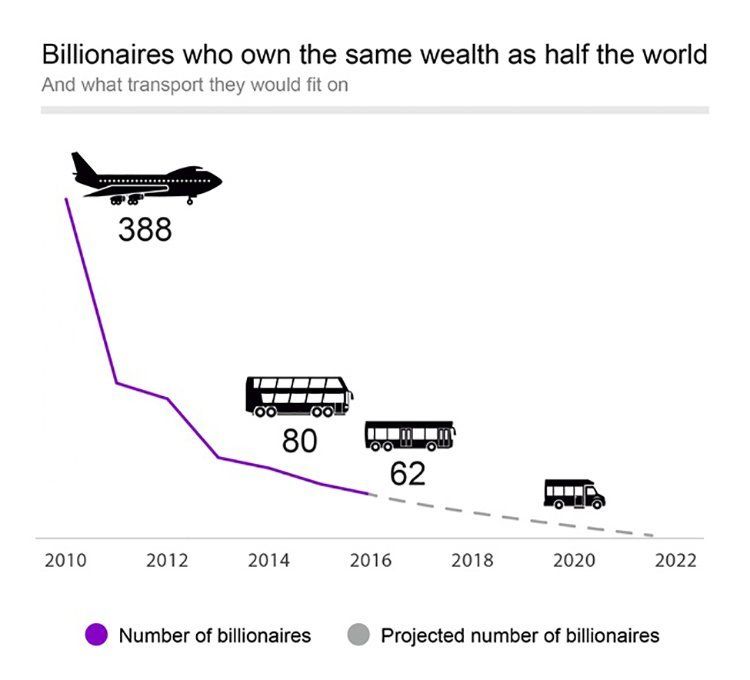 The above chart shows what size transport the billionaires would fit on. Photo credit: Oxfam

The report, An Economy for the 1 Percent, found that the wealth of the poorest half of the world’s population has fallen by a trillion dollars since 2010.

“This 41 percent drop has occurred despite the global population increasing by around 400 million people during that period,” Oxfam said. “Meanwhile the wealth of the richest 62 has increased by more than half a trillion dollars to $1.76 trillion.”

Using data from Credit Suisse, Oxfam also found that the richest 1 percent now has as much wealth as the rest of the world combined.

“It is simply unacceptable that the poorest half of the world population owns no more than a small group of the global super-rich—so few, you could fit them all on a single coach,” Mark Goldring, Oxfam Great Britain chief executive, said.

The report comes ahead of the World Economic Forum, an annual gathering of financial and political elites in Davos, Switzerland, which will take place Jan. 20 to Jan. 23.

“World leaders’ concern about the escalating inequality crisis has so far not translated into concrete action to ensure that those at the bottom get their fair share of economic growth,” Goldring said. “In a world where one in nine people go to bed hungry every night we cannot afford to carry on giving the richest an ever bigger slice of the cake.

“It is no longer good enough for the richest to pretend that their wealth benefits the rest of us when the facts show that the recent explosion in the wealth of the super-rich has come at the expense of the poorest.

“Ending extreme poverty requires world leaders to tackle the growing gap between the richest and the rest which has trapped hundreds of millions of people in a life of poverty, hunger and sickness.”

62 billionaires own as much as the poorest half of the world's population, Oxfam reports https://t.co/Vastbkwkzn pic.twitter.com/H4iuGxN2y4

The wealth of the richest 62 was calculated using Forbes‘ billionaires list. The list of 62 includes Bill Gates, Warren Buffett, the Koch brothers and the Walmart heirs.

David and Charles Koch, principle owners of Koch Industries, are tied for sixth place on Forbes’ billionaire list with each having an estimated net worth of $42.9 billion. The Koch brothers stand out with the second largest private company by revenue in the U.S.

“Few outside business circles know … how pervasive their company’s industrial influence is on our everyday lives,” explained Popular Mechanics.

“The volume of Koch Industries’ toxic output is staggering. According to the University of Massachusetts Amherst’s Political Economy Research Institute, only three companies rank among the top 30 polluters of America’s air, water and climate: ExxonMobil, American Electric Power and Koch Industries.

Thanks in part to its 2005 purchase of paper-mill giant Georgia-Pacific, Koch Industries dumps more pollutants into the nation’s waterways than General Electric and International Paper combined. The company ranks 13th in the nation for toxic air pollution. Koch’s climate pollution, meanwhile, outpaces oil giants including Valero, Chevron and Shell. Across its businesses, Koch generates 24 million metric tons of greenhouse gases a year.”

And they’ve used their vast wealth to back candidates and legislation that weaken environmental regulations that safeguard human health. Their network of conservative mega-donors, or the Freedom Partners Chamber of Commerce, raised $400 million in the 2012 election, and they plan to spend $889 million for the 2016 presidential race, according to the The Washington Post.