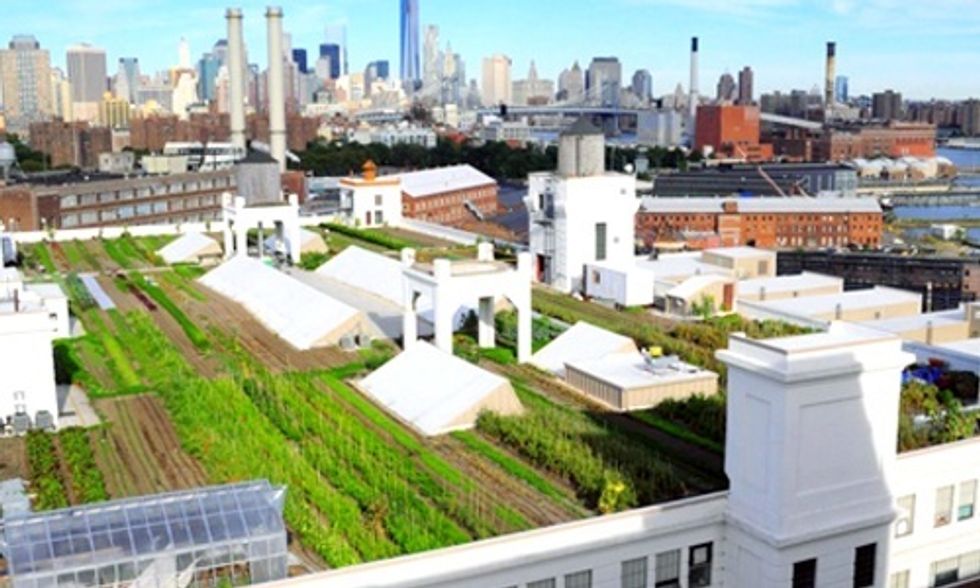 Urban agriculture has really made a comeback in the U.S. in recent years. The U.N. Food and Agriculture Organization reports that 800 million people worldwide grow fruits or vegetables or raise animals in cities, producing an impressive 15 to 20 percent of the world’s food. The U.N. Food and Agriculture Organization notes that while many city dwellers in the developing world grow food for subsistence, food production has been brought back to city centers in recent years in developed countries in a concerted effort to address sustainability issues in our food system.

We at EcoWatch have documented how cities around the world are developing and expanding their local food systems to create a more sustainable method of food production and distribution, which will become increasingly necessary as cities adapt to climate change. Urban farming is often criticized for not being scaleable.

Gotham Greens has four state of the art greenhouses where its workers grow organic greens year round. Its flagship greenhouse, built in 2010, was the first commercial scale rooftop greenhouse in the U.S, according to the company. The rooftop greenhouse measures over 15,000 square feet and annually produces over 100 tons of fresh leafy greens.

Food Field, founded in 2011, is helping revitalize Detroit by producing “fresh, healthy, and delicious food while improving the neighborhood and creating economic opportunities.” Its founders, Noah Link and Alex Bryan, believe in using environmental and social goals to develop “a successful, community-based business [that meets] the need for local, affordable, and sustainably produced food.”

Farmed Here is the nation's largest indoor farm, pumping out roughly a million pounds per year of baby salad greens, basil and mint in its 90,000-square-foot warehouse on the industrial outskirts of Chicago, according to GreenBiz.

Brooklyn Grange operates the world’s largest rooftop soil farm out of two buildings in New York City, totaling 2.5 acres, according to National Geographic. The farm grows more than 50,000 pounds of organic produce each year, and distributes it through farmers’ markets, community-supported agriculture networks, and wholesale to restaurants and catering companies.

Farmscape Gardens is California’s largest urban farming company, but unlike other companies on the list, this LA-based company's urban farms are dispersed throughout 400 locations, where its employees have installed and maintained sites at residences and businesses around the city.

Panera Bread to Drop 150 ‘Unacceptable’ Additives From Its Menu