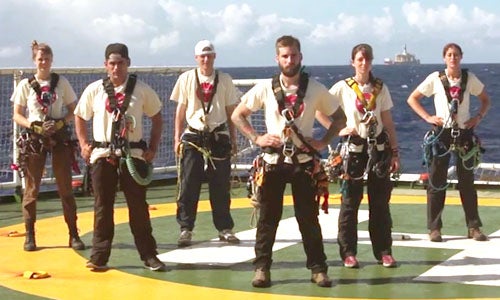 Today, six activists from the Greenpeace ship Esperanza have climbed aboard an Arctic-bound Shell oil rig, the Polar Pioneer, in the middle of the Pacific Ocean, 750 miles northwest of Hawaii.

We made it! We’re on Shell’s platform. And we’re not alone. Everyone can help turn this into a platform for people power! #TheCrossing.

The six volunteers have set up camp on the underside of the Polar Pioneer’s main deck with enough supplies to last for several days. They took this action because last week the U.S. Department of the Interior approved Shell’s drilling lease in the Alaskan Arctic, despite having been previously overruled in court twice for failure to meet environmental regulations. So now, Shell could start drilling in 100 days.

“We’re here to highlight that in less than 100 days Shell is going to the Arctic to drill for oil,” said Johno Smith from New Zealand, one of the six that is aboard the Shell oil rig. “This pristine environment needs protecting for future generations and all life that will call it home. But instead Shell’s actions are exploiting the melting ice to increase a manmade disaster. Climate change is real and already inflicting pain and suffering on my brothers and sisters in the Pacific.

“I believe that shining a light on what Shell is doing will encourage more people to take a strong stand against them and other companies who are seeking to destroy this planet for profit. I’m just one voice out here, but I know I’m not alone, and millions if not billions of voices demanding the right to safe and healthy lives will have a huge chance of changing things.”

The Polar Pioneer, which is being transported on a 712 feet-long vessel called Blue Marlin, is one of two drilling vessels heading towards the Arctic for Shell this year, says Greenpeace. The other drill ship is the Noble Discoverer, which turned out to be not so noble because “In December 2014, Noble Drilling, one of Shell’s biggest Arctic sub-contractors and owner of the Noble Discoverer, pleaded guilty to committing eight felonies in connection with Shell’s failed attempts to drill in the Arctic Ocean in 2012,” according to Greenpeace.

Watch the team gear up and talk about their motivation for their act of civil disobedience:

You should also check out the crew’s message to President Obama when they found out he authorized drilling in the Alaskan Arctic last week: