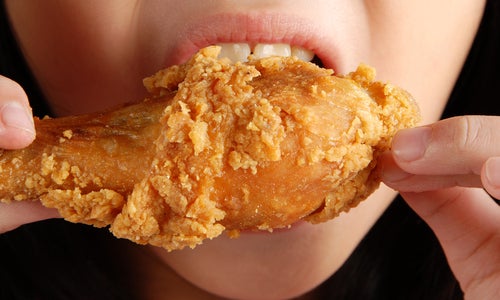 It is no secret that in the war against meat pathogens in commercial U.S. meat production, the pathogens are winning. The logical result of the tons of antibiotics Big Meat gives livestock (not because they are sick, but to fatten them up) is clear: antibiotics that no longer work against antibiotic-resistant diseases like staph (MRSA), enterococci (VRE) and C.difficile. Antibiotic-resistant infections, once limited to hospitals and nursing homes, can now be acquired in the community, Florida public beaches and on the highway behind a poultry truck. 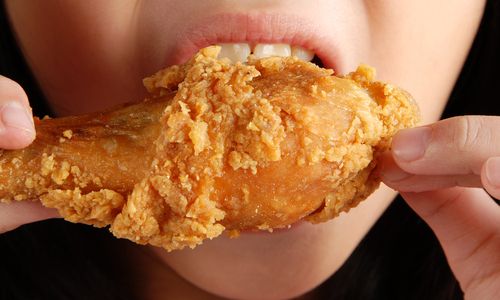 The EU has not accepted U.S. poultry since 1997. Photo courtesy of Shutterstock

Big Meat has found some novel ways to retard the growth of salmonella, E.coli and listeria on commercially grown meat, but it does not necessarily want people to know about them and these substances are conspicuously absent from labels.

If you want to know the most problematic ingredients in our food supply, just look at the items the European Union boycotts, starting with genetically modified organisms (GMOs), hormone beef and chicken dipped in chlorine baths. U.S. Big Food lobbyists are pushing hard to circumvent the European bans, says MintPress News, especially “bleached chicken.” They claim the “many unwarranted non-tariff trade barriers … severely limit or prohibit the export of certain U.S. agricultural products to the EU.”

Why do U.S. poultry processors use chlorine? It “kills bacteria, controls slime and algae, increases product shelf life [and] eliminates costly hand-cleaning labor and materials” in addition to disinfecting “wash down” and “chilling” water. “Pinners” in the slaughter facility who remove the birds’ feathers by hand wash their hands with chlorinated water to “reduce odors and bacterial count” after which the birds are sprayed to “wash all foreign material from the carcass.” Meat is similarly disinfected with chlorine, says one industrial paper, especially because conveyer belts are “ideal breeding grounds for bacteria.”

In a 2014 directive, the U.S. Department of Agriculture’s Food Safety and Inspection Service (FSIS) admits the many uses of chlorine in poultry and meat production, none of which are required to be on the label under the “accepted conditions of use” (which limit the parts per million of chlorine allowed). And it gets worse. The FSIS directive also reveals that chlorine gas is used on beef “primals,” giblets and “salvage parts” and for “reprocessing contaminated poultry carcasses.” Bon appétit.

It has only been two years since the nation’s stomach churned when it saw photos of “pink slime” oozing out of processing tubes and bound for U.S. dinner tables and the National School Lunch Program. Looking like human intestines, “lean, finely textured beef” (LFTB) was made from unwanted beef “trim” and treated with puffs of ammonia gas to retard the growth of E. coli. While the company making most of the nation’s LFTB, Beef Products Inc. (BPI) shuttered three plants and laid off hundreds of employees two years ago, it is since fighting back and has brought a lawsuit against ABC news.

The suit alleges “that ABC launched a disinformation campaign that had an adverse effect on BPI’s reputation, and used the term ‘pink slime’ to describe the company’s LFTB even after it had been provided factual information about the product,” reports Beef magazine. And, indeed, a quick look at FSIS’s 2014 directive, whose purpose is to provide an “up-to-date list of substances that may be used in the production of meat, poultry and egg products,” shows that “lean, finely textured beef” is alive and well. “Lean finely textured beef,” says the FSIS, is treated with anhydrous ammonia, “chilled to 28 degrees Fahrenheit and mechanically ‘stressed.'” Ground beef is also treated with anhydrous ammonia “followed with carbon dioxide treatment.” Neither treatment appears on the meat label.

In November, Ag giant Cargill announced it is bringing back pink slime, with two changes—instead of ammonia, E.coli will be killed with citric acid and the meat will be identified as “Finely Textured Beef” on its label.

Eight years ago there was an uproar about Big Meat using gases like carbon monoxide to color meat an unnatural red even as it was aging on the shelf. The brown color meat assumes after a few hours is as harmless as a sliced apple turning brown, says the American Meat Institute. But like mercury in tuna or ractopamine in beef, pork and turkey, Big Food didn’t blink or make any changes because it knew the contretemps would blow over—and it did. Thank you for your short memory, John Q. Public. “Modified atmosphere packaging” of meat, using assorted gases, is still a mainstay of meat production and “safe and suitable” in meat production, according to the FSIS report.

According to the FSIS directive, carbon monoxide is used as a “part of Cargill’s modified atmosphere packaging system introduced directly into the bulk or master container used for bulk transportation of fresh meat products. Meat products are subsequently repackaged in packages not containing a carbon monoxide modified atmosphere prior to retail sale.” Carbon monoxide is also used to “maintain wholesomeness” in packaging Cargill’s “fresh cuts of case-ready muscle meat and ground meat,” says the FSIS directive.

Why is Cargill’s name actually written into government directives? Maybe because it’s one of the world’s biggest Ag players according to Rain Forest Action. With annual revenues bigger than the GDP of 70 percent of the world’s countries, Cargill is the world’s largest privately held corporation, says Rain Forest Action. It operates in more than 66 countries and is one of a “very small handful of agribusiness giants that collectively are shaping the increasingly globalized food system to their advantage.”

4. Other “Safe and Suitable” Ingredients You Don’t Know You’re Eating

Unless you’re a chemist, you may not recognize some of the other ingredients in the 2014 FSIS directive, but that doesn’t mean you want to ingest them. Take “cetylpyridinium with propylene glycol for bacterial control.” While cetylpyridinium is a germ-killing compound found in mouthwashes, toothpastes and nasal sprays, in meat production it is combined with propylene glycol to “treat the surface of raw poultry carcasses or parts (skin-on or skinless).” Yum.

How about, “aqueous solution of sodium octanoate, potassium octanoate or octanoic acid and either glycerin and/or propylene glycol and/or a Polysorbate surface active agent,” also to kill germs?

And, does anyone want to eat “hen, cock, mature turkey, mature duck, mature goose and mature guinea” into whose raw meat and tissue has been injected protease produced from the mold Aspergillus for tenderness?

An under-reported way in which Big Food is seeking to kill meat pathogens, especially antibiotic-resistant pathogens, is with bacteriophages. Phages are viruses that infect and kill bacteria, essentially turning the bacteria cell into a phage production factory until the bacteria cell bursts, releasing hundreds of copies of new phages, which go on to infect and kill more bacteria. Phages, discovered in 1919, were used to treat bacterial infections but fell out of favor when antibiotics became widely available in the 1940s. Antibiotics had the advantage of attacking more than one bacterium at the same time and were not usually recognized by a patient’s immune system, so they could be used over and over in the same person to fight bacterial infection without producing any immune response.

In 2008, OmniLytics, Inc. announced FSIS approval (issuance of a no-objection letter) for a bacteriophage treatment for poultry it developed in conjunction with Elanco, the animal division of Eli Lilly, to reduce salmonella. Other, similar products soon surfaced for meat production. At least nine bacteriophage uses are listed in the FSIS 2014 directive, mostly sprayed on the hides or feathers of live animals to reduce bacterial count before slaughter. While phages are certainly “greener” than antibiotics, there are two reasons many food activists do not laud the development. Bacteriophages accommodate rather than reform the high-volume, low-ethics factory farming and do not clean up drug excesses. The other reason is phages could become yet another tool of factory farming. Cattle and other livestock operators could use phages to make animals gain weight without risking antibiotic resistance, observed a recent documentary.