5 Common Houseplants That Clean the Air for a Healthier Home 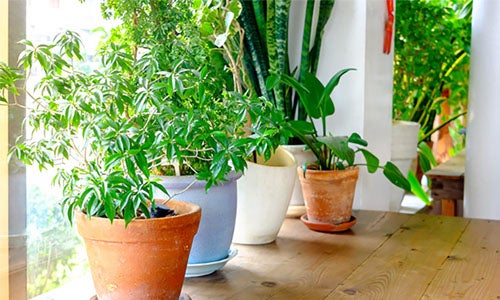 We breathe 10 to 20 thousand liters of air per day. With this much air going in and out of our lungs every second, it is vital to make sure we are breathing in good air all day.

We are so used to hearing the expression “go out and get some fresh air,” but why not bring some of that fresh air inside? Or better yet, create it inside. And not just any air. But air that can actually remove toxic gases and chemicals from your home environment. That’s correct—air that can actually remove VOC’s including formaldehyde and benzene.

Listen to this Green Divas’ segment about creating a better indoor environment for your healthy home:

National Aeronautics and Space Administration (NASA) and the Associated Landscape Contractors of America released the findings of a 2-year study suggesting that in addition to what some plant physiologists already knew, plants absorb carbon dioxide and release oxygen as part of the photosynthetic process.

As you may know, plants directly absorb carbon in their life-dependent process, photosynthesis. By taking in carbon dioxide and converting it to oxygen during photosynthesis, plants and trees naturally remove excess carbon from the air. During photosynthesis, foliage also removes from the atmosphere other chemicals, such as nitrogen oxides, airborne ammonia, some sulfur dioxide and ozone that are part of the smog and greenhouse effect problems. Plants also affect air quality by acting as collection sites for dust and other air particles. So, by adding plants to your environment, you are cleaning up your indoor air and helping the planet.

In addition, these researchers, including Dr. Bill Wolverton, formerly a senior research scientist at NASA, have found many common houseplants absorb benzene, formaldehyde and trichloroethylene. In the NASA study, each plant type was placed in sealed, Plexiglas chambers in which chemicals were injected. The results surprised everyone.

“Plants take substances out of the air through the tiny openings in their leaves,” according to Wolverton. “But research in their labs has determined that plant leaves, roots and soil bacteria are all important in removing trace levels of toxic vapors.”

Did you know that one potted plant per 100 square feet will clean the air in an average office? Although not a replacement for an air purifier, NASA says that 15 to 18 good-sized plants in 6 to 8-inch diameter containers will improve air quality in an average 1,800 space. But, not just any plant, there’s a certain 50 plants that work the best.

The top 10 list can be found in the Just GREEN It! book. But, here are the top five plants that are most effective in removing formaldehyde, benzene and carbon monoxide from the air, according to the study.