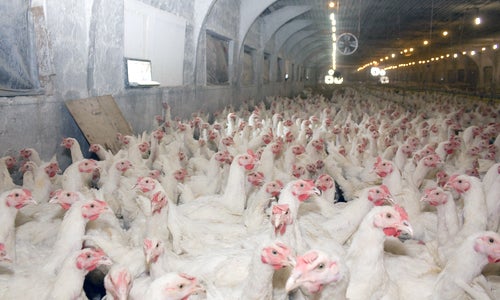 It’s a big world out there. On second thought, it feels like the world is getting smaller.

Trends point toward a planet that will be even more crowded and tightly bound than ever as the population soars from seven to nine billion and prosperity rises for hundreds of millions by 2050. Such global forecasts have led to vigorous discussions about resource constraints over the last few years. For instance, projections from the Alternative Worlds report by the National Intelligence Council posits that the world will need 35 percent more water, 40 percent more energy and 50 percent more food by 2030. In short, more basic nexus resources will be stretched by more people. Throw in the wild card of climate variability and in creeps that uncertain feeling about global prospects. 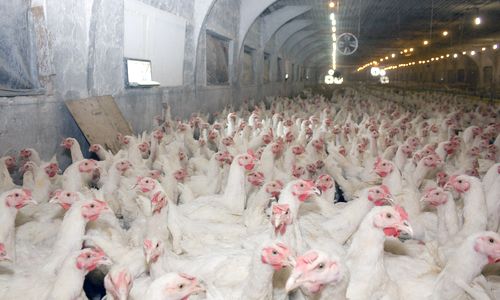 One of the biggest questions around global food security is whether the current industrialized meat production system (the CAFO model) can meet growing future demand.

The way things are going, feeding the world could become even more precarious than it already is. One of the biggest questions around global food security is whether the current industrialized meat production system (the CAFO [confined animal feeding operation] model) can meet growing future demand. The resource intensity of meat production can’t be ignored as neighbors in developing countries emulate the meat-heavy Western diet. The symbol for global economic development—often thought of as a car in every driveway—is more aptly imagined as a steak on every plate. Concern about water for meat production is as essential as it is immense, yet it is just one massive wave in the sea of resources necessary to keep global meat consumption afloat.

We know meat production takes many resources, but do we have any idea what the limits of all those resources are?

The United Nations projects that by 2030 water scarcity could affect nearly half the world’s population with demand surpassing supply by 40 percent. One 2012 World Water Week study made waves when it suggested a largely vegetarian diet option—reducing the percentage of animal protein in our diet from the average of 20 to five—to feed the growing global population, since a meat-centered diet can require five to 10 times the water of a vegetarian diet. As we obtain more global water data from sources like NASA’s GRACE Satellite (no relation) that highlight certain agriculturally sensitive and dry parts of the world like the Middle East, northern India and the U.S. High Plains—all of which are losing stored water—sustainable water management becomes absolutely critical. This is especially true as local, competing demands between agriculture, the power industry and public drinking water increase.

Nitrogen and phosphorus prove the point that too much of a good thing can be very bad. These two fertilizers are applied to the point of becoming pollutants. There are two ways this happens through industrial meat production. The first is through synthetic production of fertilizers, especially those that are nitrogen based, that get applied in excess onto fields that grow feed crops for CAFO-raised or finished animals. The second pathway is through accumulation of enormous amounts of manure that is produced by large numbers of animals concentrated in a given location. While some fraction of nutrient-rich fertilizers are taken up by plants, the excess eventually enters waterways which cause large algae blooms that that kill aquatic life through oxygen depletion and cause widespread “dead zones.” The infamous Gulf of Mexico dead zone is a prime example: too much fertilizer and manure from the US Midwest ends up in the Mississippi River and eventually in the Gulf of Mexico.

The change in land-use from forest, wetlands and grassland to agricultural fields has harmed biodiversity and impaired “ecosystem services,” or the ability of the natural environment to provide a natural buffer in things like water systems and nutrient and carbon cycles. There is the possibility of reaching “peak farmland” where almost all of the arable (farmable) land on Earth is in use, which can lead to social tension and land grabs from external countries. Land grabs are becoming more common and those living near CAFOs experience these neighboring factories as unhealthy and a nuisance. Interestingly, most land-use concerns happen at the local or regional level.

No environmental issue is more planetary than climate change brought about by the accumulation of greenhouse gas emissions in a shared atmosphere. Recent United Nation-led reports by the Intergovernmental Panel on Climate Change and the Food and Agriculture Organization of the United Nations (FAO) reaffirm the dramatic effects climate change will have on livestock production, particularly those systems that rely heavily on grain and soy to fill the feeding troughs of CAFO-raised animals. Among the challenges to be faced by both farmers and livestock are increasing average temperatures and shifting climactic zones, the greater likelihood of crop loss and damage from “drought and deluge” and commodity feed price volatility. There is a feedback loop in play here—as illuminated by the FAO report—because livestock production contributes 14.5 percent of total greenhouse gas emissions. (Note that some estimates of meat production’s greenhouse gas emissions range much higher to 51 percent).

Unfortunately, “business as usual” for increased meat production means the CAFO model, which was created and perfected in the U.S. and is being exported worldwide. The model has succeeded in terms of profiting a small number of large, industrialized livestock producers that control the meat market, providing deceptively “cheap meat” that hides the true costs of all the numerous problems associated with industrial livestock production. Despite the harmful nature of this form of meat production, the trend of globalized CAFO meat production is accurate if the recent Smithfield Foods merger is any indication. Limits be damned!

Of course, no one wants to live beside a CAFO because of the terrible costs to community livability and human health, but the reality is that no one knows how these trends, production methods or planetary boundaries will play out. Many communities are powerless to stop them from moving in once they’ve gotten a foothold. The good news is that there are alternatives to meat production and consumption that are taking root, whether it’s through a return to pasture raised-meat, reducing meat consumption a la Meatless Mondays or even test tube meat (please, no). In the end, humanity has to figure out new and sustainable ways to feed ourselves. We can depart from the industrial food path and eat meat; we can ensure that everyone is fed and raise livestock in a more sustainable and humane way. It is incumbent upon to us explore those alternative paths before our planet—big or small—becomes less liveable.