3 Things You Need to Know About the Paris Climate Agreement 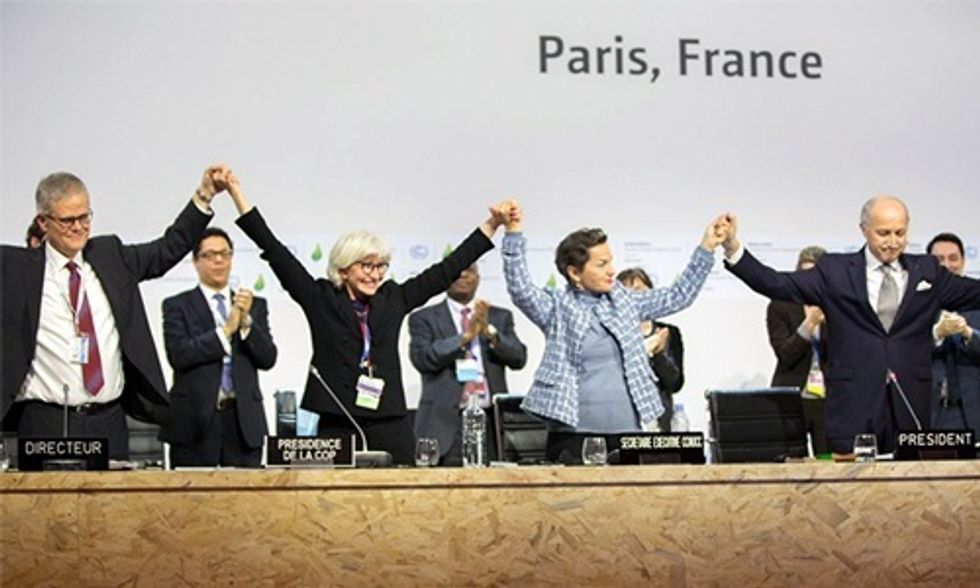 After two weeks of intense negotiations at the UN’s COP21 climate talks and behind-the-scenes maneuvering seemingly lifted straight out of House of Cards, we have a global deal to cut greenhouse gas emissions. A big, big deal.

And while the ink is still drying on the agreement and analysts are working to digest its full implications, a few major points stand out. Here’s what you need to know.

Not the war, but a critical battle. With negotiators from 195 countries with very different agendas and interests involved, a perfect agreement that ushered in a 100 percent clean energy economy on Jan. 1 was never a possibility. What we needed was an agreement that—as Coral Davenport writes in the New York Times—sends a clear signal to markets and investors that the future of energy is in renewables like wind and solar.

The Paris agreement passes that test. With this agreement, nations signed on to a goal of keeping warming below 2 degrees Celsius, while pursuing actions to stay under 1.5 degrees and, in not so many words, reaching net zero greenhouse gas emissions in the second half of the century. We’re not getting carried away by this first number. Many will argue that 2 degrees is still too high to avoid serious climate impacts and many countries fought for a pure 1.5-degree goal. Plus, scientists believe the commitments on the table won’t get us to 2 degrees, which means there’s real work still to be done to make countries’ commitments are updated to become even more ambitious in the years ahead.

The important thing is that we have an agreement with the most ambitious target ever formalized at this level and a shared long-term goal of breaking up with fossil fuels. The implication couldn’t be much clearer: with governments taking increasingly serious steps to move away from oil, gas and coal in the years ahead, demand will slowly decline. Meanwhile, demand for energy from clean, renewable sources will grow as nations fill in the gap. Which means there’s a lot of money to be made in the clean energy sector. If you’re an investor and you happen to like making money, you’re going to take note.

It’s one thing to set a common goal. It’s another to make sure everyone works together to get there.

We knew an agreement at COP21 would be a vital first step. We also knew the challenge would be to keep nations moving forward in the years ahead. By establishing a process where countries will meet every five years to review their progress in cutting emissions, the Paris agreement creates a way to ensure everyone’s living up to their promises. Just as important, this window creates an opportunity for civil society groups like us and citizens like you to keep the pressure on governments to increase their commitments to cutting emissions—also submitted every five years.

We knew this agreement wouldn’t be perfect and it’s not. Divisions remain on the concept of differentiation, i.e. which countries should take more action on mitigation and financing resiliency and action in developing and less-developed countries. But negotiators have carved out a workable solution for the time being. Governments have a great deal of work to do over the next few years to ensure that this agreement is implemented in a truly equitable manner.

3. The COP21 Agreement Wasn’t the Only Game in Town

An agreement with the scope and reach of the one reached at COP21 is critical if we’re going to get emissions down quickly enough to get close to the 1.5 or even 2 degree target. While national-level action is essential, it’s also not enough on its own.

Which is why all the initiatives announced in Paris to give cities, companies and private citizens a bigger role in speeding up the transition to a clean energy economy were, frankly, so exciting. For starters, there was the announcement that nearly 400 cities have signed up to the Compact of Mayors coalition to measure and reduce emissions. When you consider these cities could together avoid 740 million tons of emissions annually in 2030, that’s a major step forward.

Then there was the 154 U.S. companies that account for nearly 11 million employees and more than $4.2 trillion in annual revenue pledging support for climate action. Plus, while 20 countries—including the U.S.—pledged to double their investment in clean energy research and development, private investors were also announcing sizeable commitments to support this area. Already, we’ve seen the price of solar, wind and battery technologies plummet in recent years. These new commitments can only accelerate this trend right when we need it most.

Let’s also highlight the fact that we saw a truly unprecedented show of popular support for a strong agreement all around the world. Climate Reality joined with partners throughout the climate community—including Avaaz, 350.org, Sierra Club, Guardians of the Earth, CAN International, Greenpeace and many more—to bring more than 6.2 million people together to demand action in Paris, with more than two million of those being Climate Reality supporters. The world was watching these negotiations in a way it never had before—and it showed.

We’ll have more and more in-depth analysis of the Paris agreement in the weeks ahead. Though there are still very real challenges and a whole lot of hard work in front of us and things the agreement didn’t fully achieve, the key takeaway here is that for the first time, we have a common goal in confronting climate change and we have a way to do it. For years, we’ve been saying that Paris could be the turning point. Now we believe it will be. And for today, that’s enough to celebrate.

Here's What You Can Do

The incredible success we saw in Paris was only possible because people like you stood up and spoke up in unprecedented numbers all around the world. Will you help us keep the momentum going in 2016 by donating to The Climate Reality Project today? Here's the best part—from now until midnight on Dec. 31, your donation will be doubled in value by a generous donor—up to $150,000. Don't miss this amazing opportunity. Donate now.

And the Unjust Transition Award Goes to …