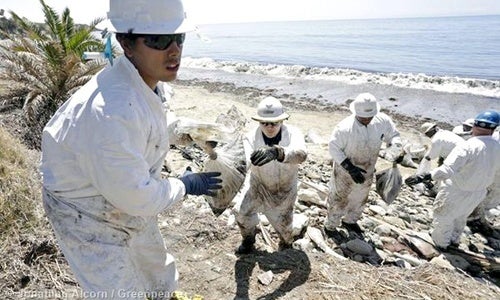 Two weeks ago, a major oil spill in Santa Barbara County made headlines after a ruptured pipeline dumped as much as 101,000 gallons of crude oil on the California coastline. The spill stretched across roughly nine miles of state beach with tens of thousands of gallons entering marine protected areas in the Pacific Ocean. 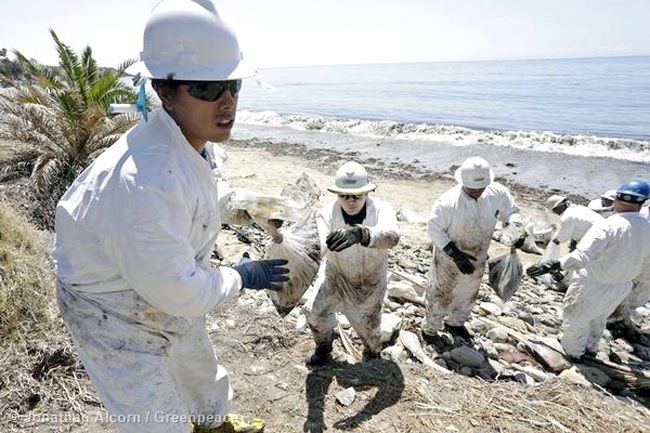 Clean-up workers pass plastic bags full of oily debris from Refugio State Beach near Goleta after a 24-inch underground pipeline broke and leaked into a culvert leading to the Pacific Ocean. Houston-based Plains All American Pipeline said up to 105,000 gallons of oil were released before the pipeline was shut down. Photo credit: Jonathan Alcorn / Greenpeace

The spill took place just days after activists gathered in Seattle to oppose Shell’s plans to begin drilling for oil in the Alaskan Arctic this summer.

The Santa Barbara spill underscores what environmental leaders have been saying for decades, and the core of the message delivered to President Obama on Arctic drilling. When we drill, we spill.

So, what can we learn from this latest oil disaster? And what does it mean for the Arctic? As bad as the spill in Santa Barbara is—and it is—a spill in the Arctic would be much, much worse.

Here are three of the biggest reasons why.

An Arctic Spill Would Be Larger

The Santa Barbara spill was by no means small, but research indicates that an Arctic spill would likely be just as large, at least for the portion entering ocean waters.

According to the U.S. Coast Guard classification system, 101,000 gallons ranks Santa Barbara as a “major” spill. Counting only the 20,000 gallons that made their way into the ocean would qualify it as a “medium” spill.

But the Department of the Interior released findings earlier this year stating that—if Shell finds oil and can produce it—there’s a 75 percent chance of a spill greater than 42,000 gallons. Hundreds of smaller spills are virtually guaranteed.

Even barring an actual spill, Shell’s current drilling plan allows for the discharge of thousands of gallons of toxic drilling fluids and waste into the ocean.

Response Would Be More Difficult

Even for a relatively small spill, how to negotiate a cleanup in tricky Arctic conditions is a question neither Shell nor the Obama administration have been able to answer.

Cleanup in Santa Barbara will take months. CNN reported that less than 10 percent of the oil had been cleaned up as of last Thursday. Coast Guard Captain Jennifer Williams emphasized that currents and wind patterns make the ocean-borne oil slick a “moving target.” The disaster has already hurt the region’s $1.2 billion tourism industry.

Pretty bad, right? Now consider that the nearest Coast Guard station to Shell’s proposed drilling site in Alaska is more than 1,000 miles away. Icy waters with waves reaching 50 feet make rapid response in the likely event of a spill even more challenging. Shell estimates it could take about six days for responders just to reach the site of a spill, while oil would likely reach land within three days.

This Is Shell We’re Talking About

Plains All American Pipeline—the company responsible for the Santa Barbara spill—has a long track record of spills. It’s spilled more than 600,000 gallons and caused $23 million in property damages since 2006 even before this incident. A report just out yesterday even revealed that parts of the Santa Barbara pipeline were corroded.

That’s bad, but Shell is on another level. Shell’s disastrous 2012 foray into the Alaskan Arctic resulted in eight felony convictions, a $12 million fine, the wreck of its prized new Kulluk oil rig, and countless safety and environmental violations. Shell’s new plan—based on optimistic assumptions untested in the unique Arctic environment—does nothing to quell these doubts.

When We Drill, We Spill

This recent catastrophe in Santa Barbara makes it clear why we cannot drill in the Arctic—or anywhere, really. It’s not a matter of if a spill takes place, it’s when. If it’s happened in the calm waters of Santa Barbara (twice), why would we expect it to be any different in the Arctic?

It’s time for Shell and the Obama administration to face reality: when we drill, we spill. So let’s take a cue from the thousands of activists who came out strong in Seattle in May and say #sHellNo to Arctic drilling.