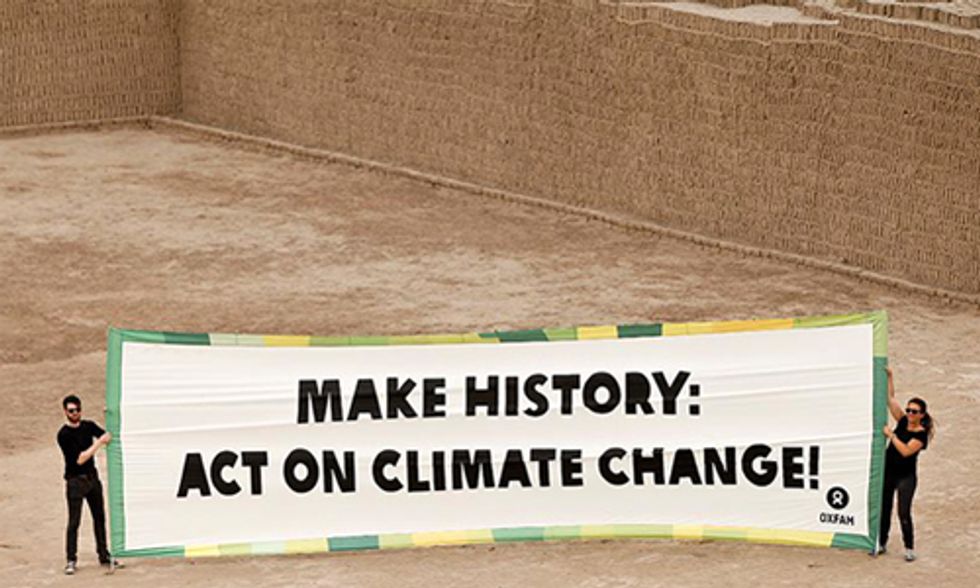 There is no question: 2014 has been a key year for the politics of climate change already, even as the latest round of climate talks get under way in Lima, Peru, this week.

Before the climate talks started, activists in Peru unveiled this banner at the Huaca Pucllana ruins in Lima.

This is the year that you, and people like you, turned the latest, frightening warnings from climate science into a message of hope and defiance. More than 400,000 people marching in New York to call for fast and just climate action were the powerful symbol of a climate movement reawakening all over the world.

As historic as the march in New York was, the end of China's coal boom, the very boom that made the first ten years of the 21st century the worst ever for our global climate was also important. The latest data shows coal use falling faster than thought in China. If this turn into a long term trend, China's emissions can stop their relentless rise soon.

China and the U.S. have together, for the first time, agreed to reduce carbon pollution and to drastically increase the use of clean energy. Their agreement—just like the new goals that the European Union has set for itself—are painfully inadequate in the face of the urgency we face. But they change the dynamic of the global climate conversation.

For years, global climate meetings were the place where countries would say to each other: “you go first, you know this issue is important.” Now we are moving to a different world. Now countries say: “I can act, if you can act.” This is a major mental shift. This thinking makes collective action a possibility.

To deliver actions that can actually prevent climate chaos, though, we need to go further. We need more countries to say, “I want to act faster than you, because that will be better for me (and you).” This is not a pipe dream because acting on climate change delivers jobs, livelihoods and opportunities. The days when acting against climate change could be considered a burden are over. Clean, renewable energy is getting bigger, better and cheaper every day and can provide the solutions the world needs. Renewables are the most economical solution for new power capacity in an ever-increasing number of countries.

100 percent of new power capacity added in the U.S. in August was renewable and countries such as Denmark and Germany are producing new clean electricity records almost every month. China is installing as much solar this year as the U.S. has ever done.

As the warnings are getting louder and louder—this year will, it is predicted, be the warmest on record—the bricks are quietly being laid in national policies around the world, that could deliver much more decisive climate action—and a meaningful agreement in Paris next year.

For that to happen, governments in Lima must agree a few key issues:

Of course, there is no guarantee that Lima will deliver these key demands (and the many other things the conference could make progress on). Over the next two weeks, governments will often make me despair and remind me of the absurd theatre that the climate negotiations often are. Sometimes, I may even wonder if there really has been progress made at all this year … especially when listening to the governments of Canada and Australia, whom I expect to speak on behalf of the oil and coal industries, not their people. And who will have many—too many—supporters, as with too many countries, the polluters of the past dominate domestic politics.

But, as Kumi Naidoo said at a recent TEDxAmsterdam talk:

"When people in large numbers start believing that change is possible, only then does change become possible.”

We are getting there on climate change. The urgency of the climate science, the increasingly attractive economics of renewables, and the rising global climate movement, means that progress on climate action is now inevitable. Leaders in Lima can do their job on behalf of their people speed up the transition to a world run on renewables for all. But even if they dither, they will not be able to change the fact, that the momentum is on our side as we end 2014.