How Does the Climate Crisis Impact the 2020 Senate Races? 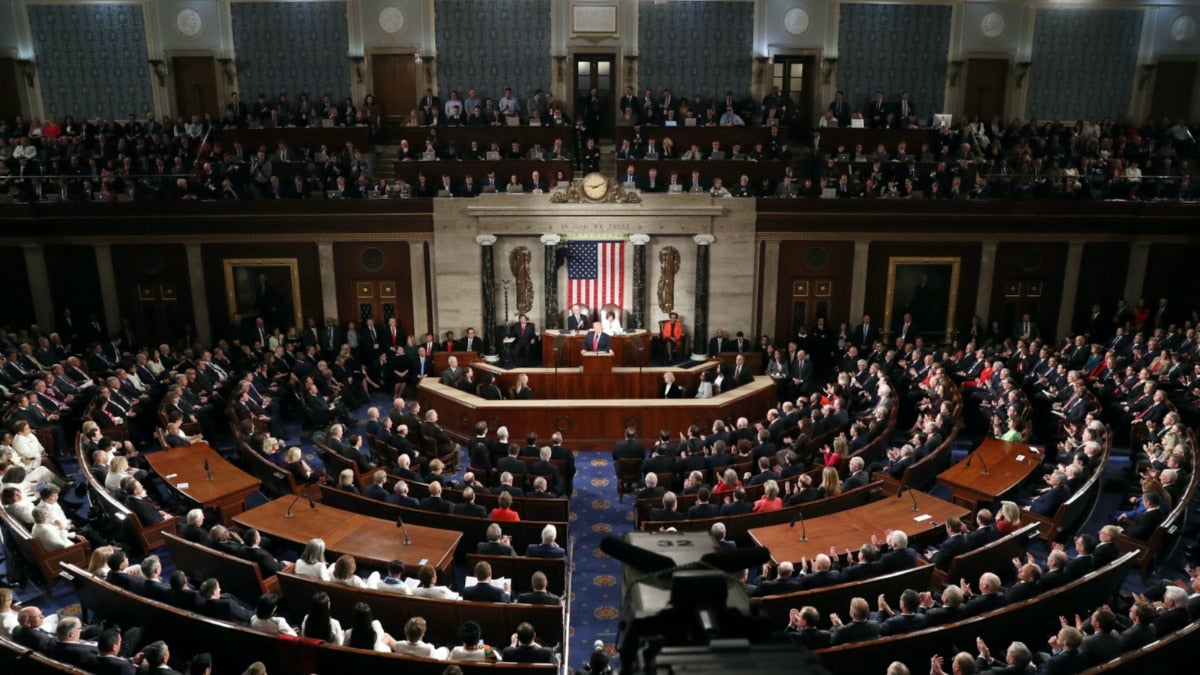 President Donald Trump delivers the State of the Union address in the chamber of the U.S. House of Representatives on February 04, 2020 in Washington, DC. Mark Wilson / Getty Images

It wasn’t so long ago that the issue of climate change was poised to play a huge – possibly even a decisive – role in the 2020 election, especially in the race for control of the U.S. Senate. Many people supporting Democratic candidates saw a possible Democratic majority as a hedge against a potential Trump re-election … a way to plug the firehose spray of more than 100 environmental regulation rollbacks and new anti-climate initiatives by the administration over its first term.

Now coupled with the singular issue of “Trump” and recently compounded by the death of Supreme Court Justice Ruth Bader Ginsburg, these matters may be sucking the air out of the room for 2020 election issues. So with weeks to go, will climate change manage to play any kind of specific role in the most competitive Senate races where policy details once upon a time counted?

“Climate change does not seem to be a big issue in the key Senate races,” says Kyle Kondik, via email. He is managing editor of Sabato’s Crystal Ball at the University of Virginia Center for Politics. “Even the weather disasters of this summer – hurricanes and fires – are not necessarily easy to connect to climate change for voters.”

A Pew Research Center survey of registered voters from late June through early August had climate change second from last among a dozen issues voters considered very important. That was actually 10 percentage points lower than a similar survey had found before the 2016 election.

A Quinnipiac University poll of likely voters in the Maine, South Carolina, and Kentucky U.S. Senate races released September 16, two days before Ginsburg’s death, showed climate change in single digits among the most important issue for voters. It was last or next to last in each of those state’s Senate races.

Climate change ‘clearly a motivator’ for some potential voters, with ‘power to move swing voters.’

That finding was underscored in a national presidential poll by Quinnipiac released September 23 in which climate change was next-to-last at 6% among likely voters as the most important issue.

So it would seem all the little details and nuances of each candidate’s climate and environmental positions in the roughly 10 most competitive Senate races … nope, those really don’t matter right now. But let’s be clear – they DID matter, especially in a few Democratic primaries, most notably Massachusetts Democratic Sen. Ed Markey’s win over challenger Rep. Joe Kennedy III, in which Rep. Alexandria Ocasio-Cortez’s (D-NY) support for Markey got him a lot of cred with climate activists.

And it’s clear from surveys that people absolutely do care about climate change broadly. So there are those who think the issue of climate change could be a motivating force for select groups that in past elections have been either less than reliable voters or more persuadable voters. Their participation, some feel, could help push a few candidates over the top even given the “You’re-either-with-Trump-or-against-Trump” mentality of the elections.

In a September 1 memo on climate and the election, Andrew Baumann, vice president of the consultants Global Strategy Group, wrote: “Few issues have seen as dramatic a shift in public opinion as climate change has over the last few years. Only marriage equality and the recent shift in views around racial justice outpace the rapid growth in the salience of climate change as an issue.”

Calling it a “winning political issue” the memo says: “First, it is clearly a motivator for both younger and Latinx voters. Second, it has the power to move swing voters, particularly center-right white women.”

Baumann points to a finding that when a group of such women were asked generic ballot questions, Democrats trailed by nine percentage points. But when the question was revised as a choice between:

“I think it is playing a role,” says Senator Sheldon Whitehouse, D-RI, a longtime outspoken climate activist who is on the Senate Environment and Public Works Committee and also on the Senate Democrats’ Special Committee on the Climate Crisis. If Democrats win back the Senate, he stands to play an even more pivotal climate role as part of the majority. He is not up for re-election this year.

“I think from the Democratic side it’s playing a role in generating enthusiasm – particularly making younger voters feel that they have a real stake in this election. On the Republican side, I think things have moved enough that candidates can no longer get away with simply scoffing about climate change.”

So who’s still thinking climate? Mostly young voters – 18 to 25 or 29 and Latinx voters.

Climate and the environment are the top concern among young voters, just above racism and healthcare according to CIRCLE, the Center for Information and Research on Civic Learning and Engagement at Tufts University, which focuses on the political life of young people in the U.S. For Latinx youth, it drops a bit but remains in the top three.

The issues young people care about have an impact on how they volunteer their time, says Kristian Lundberg, an associate researcher at CIRCLE. He says that’s played out most notably through the Sunrise Movement, which focuses on climate change and the environment along with other key activist groups such as Black Lives Matter and March for Our Lives.

He points to polling this summer that showed that 83% of 18-to-29-year-olds felt they had the power to change things. “Young people feel much more empowerment than in 2016 and 2018,” Lundberg says. “It’s intentional these movements are carving out space for young people. It’s an important strategy.”

In positions of power in these organizations, young people have developed peer-to-peer outreach on activism. And Lundberg says young people have made the leap that connects activism to voting as a lever for change. “In the past in very close races, young people breaking heavily have provided the margin of victory,” he says.

CIRCLE is highlighting 10 U.S. Senate races as ones in which young voters can be decisive. Several of them have notable climate or environmental components – most prominently the Colorado and Montana races.

The Republican incumbents in each state – Cory Gardner in Colorado and Steve Daines in Montana – are running against a popular Democratic governor – John Hickenlooper in Colorado, now out of office — and Steve Bullock, still the governor of Montana. Both governors have had to balance their state’s fossil fuel economic interests with supporting climate change solutions.

The Trump administration has given both GOP Senate incumbents some environmental gifts – the Great American Outdoors Act and establishment of an EPA Office of Mountains, Deserts and Plains in Colorado designed to help with cleanup of abandoned mines in both states. (There’s some question of whether that can be done without congressional approval.)

While both moves are more about land use than climate change, they give the two vulnerable Republican senators a bone to throw to their sizable outdoors enthusiast constituencies.

“Bullock has been no climate champion by any means,” says Emily LaShelle, a volunteer with Sunrise in Bozeman. But she’s out there working to get him elected anyway.

She believes if Bullock were to make a hard pivot to go all-in on climate, “young people would really turn out.”

The Trump administration has also thrown a gift to endangered Republican senators and swing states in the Southeast – a ban on offshore drilling from Florida through North Carolina; the latter state was added after the original ban through South Carolina was announced.

All those states had opposed offshore oil and gas drilling, which the Trump administration has advocated. Florida and North Carolina are considered presidential swing states and incumbent Republican senators in North and South Carolina and Georgia are facing hard-fought races. So there’s clearly some recognition that climate activists could make a difference.

Tying Climate Change to the Economy

It also showed that linking climate change to the economy may be key. That means talking about clean energy and jobs together, says Danielle Deiseroth, climate data analyst for Data for Progress. She says that in addition to jobs, climate change issues include climate justice and economic equality – both of heightened interest because of fallout from western wildfires.

“Climate change, we’ve observed over the last year or so, is a key mobilizing issue and a key persuasion issue,” she says. “Climate issues can only grow support for Democratic candidates.

“I think it’s pretty naive to say climate is the key issue for voters. For a lot of voters it really exemplifies so many things that are wrong with the Trump presidency,” Deiseroth says.

So a factor among others. Helpful, but pivotal only in narrow circumstances.

At the League of Conservations Voters, a progressive environmentalist organization putting a lot of money and effort into the 2020 races, Senior Director of Political Affairs Craig Auster says: “I’ll push back that climate change doesn’t matter or isn’t registering.”

“It’s still showing up in several Senate races. It’s been playing a role in almost all of them.”

Candidates are still talking about it, he says, pointing to Colorado, Montana, Iowa, and other states where ads are addressing climate and environmental issues. That shows the candidates believe their opponent is vulnerable on the issue or they’re strong on it, he says.

“Climate change matters,” he says. “We have proof point after proof point about what’s happening, whether it’s a hurricane, a superstorm, derechos in Iowa, or wildfires out west.

“Pre-COVID it was top tier for Democratic voters along with healthcare. If COVID didn’t happen I think climate would be a big deal.”