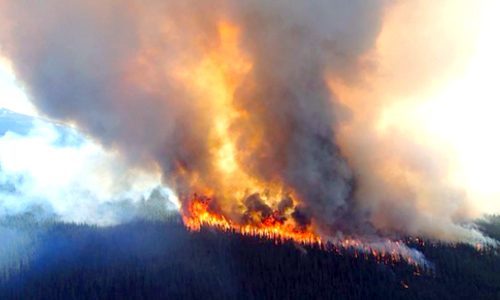 More than 10 million acres burned across the U.S in 2015, the National Interagency Fire Center reported on Monday. That’s roughly the size of Connecticut and Massachusetts combined.

In 2015, a total of 10,125,149 acres burned, surpassing the previous record set in 2006 at 9,873,745 acres. Four million more acres burned than average, according to the organization, with fires in Alaska contributing to half the total acres burned.

A record warm winter coupled with exceptionally dry conditions in the Western U.S. sparked destructive fires. Alaska saw its second-worst fire season on record. At one point in the summer, the state had more than 300 active blazes.

Washington and Oregon also had record fire years, with the Okanogan Complex in Washington surpassing last year’s Carlton Complex to become the largest fire in the state’s history. And California had two fires rank among the top 10 most destructive in its history, The Washington Post reported.

The U.S. Forest Service accurately predicted in May 2015 that last year’s wildfire season would be the worst one yet due to climate change and a prolonged drought in the Western U.S.

It’s well-documented that wildfire seasons are worsening. “Wildfire season has gotten almost 20 percent longer over the past 35 years worldwide as a result of rising global temperatures and fewer rainy days,” ClimateNexus reported. “In the U.S., climate change has led to fire seasons that are now 78 days longer on average compared to 1970. U.S. wildfires have also seen significant growth, both in terms of acreage burned and in financial costs to property owners and communities.”

However, the federal government is not adapting to this new reality.

“Agriculture Department officials have warned that fire seasons are starting earlier and lasting longer than years ago, and they’ve sought to convince Congress to change the way it funds firefighting because its budget appropriation falls short nearly every year. So far, Congress has refused.

“Lawmakers base their funding on the average cost to fight fires over the previous decade. But that doesn’t account for wildfire seasons that now run from April through December instead of June to September. It once was rare to see 5 million cumulative acres burn in a year, fire officials say, but recent seasons have recorded twice that. At least two controlled wildfires are currently burning in California and Texas, according to the National Interagency Fire Center.”

In response to the record-setting 2015 wildfire season, Vilsack renewed his call for Congress to pass the Wildfire Disaster Funding Act. He said:

“Last month I directed our staff to end the practice of fire borrowing and slow the consuming growth of fire as a percentage of the Forest Service budget and, instead, ensure that all resources in the 2016 budget are spent in the manner intended, such as the important forest restoration work that helps to minimize wildfires in the first place.

“Today’s disquieting report should serve as a powerful call to once and for all fix how the Forest Service pays for firefighting. With a predictably long fire season on the horizon in 2016, lives, property, and the future of our forests and grasslands hang in the balance. Congress must fix this issue once and for all.”