2012 Officially the Warmest Year On Record 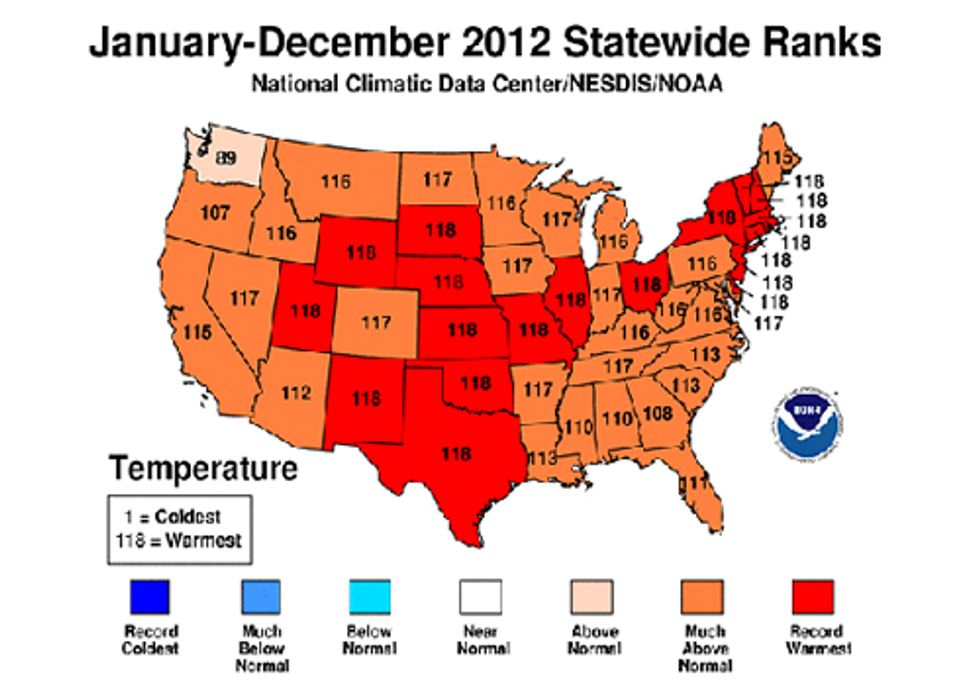 The U.S. National Oceanic and Atmospheric Administration (NOAA) today issued its monthly State of the Climate report, which showed 2012 was the hottest year on record in the continental U.S.

"2012 marked the warmest year on record for the contiguous United States with the year consisting of a record warm spring, second warmest summer, fourth warmest winter and a warmer-than-average autumn. The average temperature for 2012 was 55.3°F, 3.2°F above the 20th century average, and 1.0°F above 1998, the previous warmest year." according to the NOAA report.

The report noted that:

“NOAA’s report should sound the alarm that we can’t wait another day to start fighting climate change,” Lashof said. “The good news is that the president can start right now—by using current law and partnership with the states—to slash carbon emissions from existing power plants, which are the main source of climate-altering pollution," said Daniel Lashof, director of the Natural Resources Defense Council's (NRDC) Climate and Clean Air Program. "NRDC has demonstrated that he can get big reductions at lower cost and with higher health and economic benefits than many would expect.”

The U.S. Climate Extremes Index indicated that 2012 was the second most extreme year on record for the nation. The index, which evaluates extremes in temperature and precipitation, as well as landfalling tropical cyclones, was nearly twice the average value and second only to 1998. To date, 2012 has seen 11 disasters that have reached the $1 billion threshold in losses, to include Sandy, Isaac, and tornado outbreaks experienced in the Great Plains, Texas and Southeast/Ohio Valley, according to NOAA.

And if you think hot temperature and extreme weather is only happening in the U.S., think again. Yesterday, Jan. 7, was the hottest day in Australian history, averaged over the entire country, according to the Australian Bureau of Meteorology.

The high temperature averaged over Australia was 105°F (40.3°C), eclipsing the previous record of 104°F (40.2°C) set on Dec. 21, 1972. Never before in 103 years of record keeping has a heat wave this intense, wide-spread and long-lasting affected Australia. The nation's average high temperature exceeded 102°F (39°C) for five consecutive days Jan, 2 - 6, 2013—the first time that has happened since record keeping began in 1910, according to Dr. Jeff Masters.

A new report out today by Media Matters for America reveals that even with 2012 being the hottest year on record in the continental U.S., climate coverage from mainstream media remained minimal.