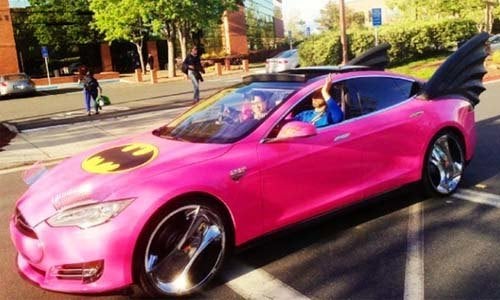 Tesla has become incredibly popular in recent years. The electric car company’s revolutionary powerwall battery allows you to charge your car with energy generated from residential solar panels. It has already sold out through 2016. And Elon Musk is hoping his Model S will be the first mass-produced all-electric car. He’s building a Tesla Gigafactory outside of Reno, Nevada that he is hoping will put production at 500,000 cars per year.

Musk is also working on “conquering range anxiety” with Tesla models averaging between 200 and 270 mpg. Tesla is rapidly expanding its network of supercharging stations across the country. The company even partnered with Airbnb to install charging stations at host homes, first in California and eventually around the country.

So it really comes as no surprise that celebrities can’t get enough of Musk’s Tesla. Two nights ago, Stephen Colbert mentioned to Musk on his new Late Show that he personally owns a Tesla. Turns out, so do a lot of other celebrities.

Cameron Diaz walking back to her Tesla in Hollywood. She was one of the first celebs spotted in the new Tesla Model S pic.twitter.com/PD0lzfo9d5 — Wheels&Heels (@Wheelsandheels) April 14, 2013