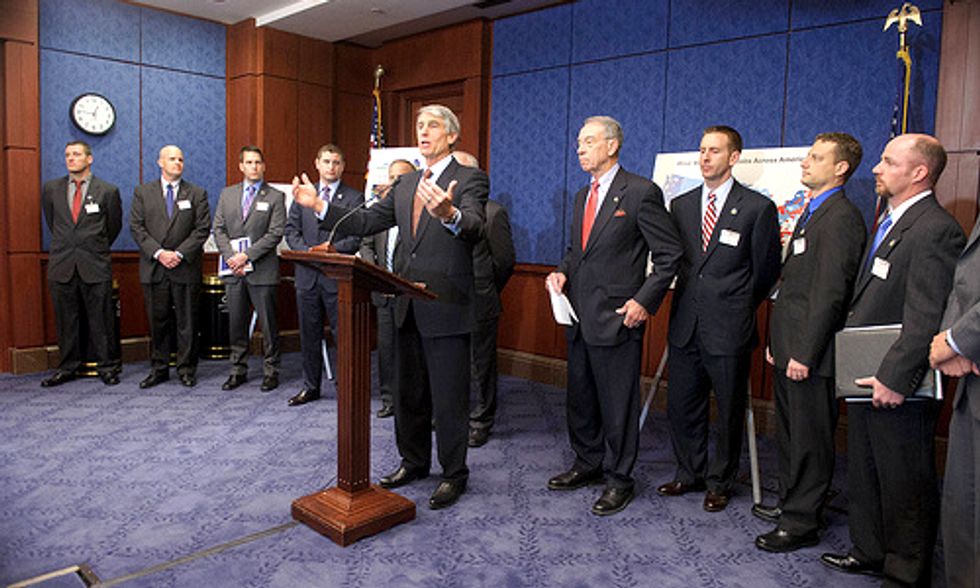 There are 80,000 people in the U.S. who are employed in the wind energy industry—an industry that has secured $105 billion in investments since 2005.

At the same time, the cost to deploy the energy has dropped by 43 percent in four years and wind has risen to become the fifth-largest power source in the U.S.

A bipartisan group of 144 Congressional members says that growth didn't happen without the support of the U.S. government. If the form of renewable energy is to continue limiting emissions, wind energy will need another economic boost in the form of tax-credit renewal, the senators and representatives wrote in a pair of letters to the Senate Finance Committee's leadership.

U.S. Sens. Mark Udall (D-Colo.) and Chuck Grassley (R-Iowa) encouraged 24 other senators to sign a letter urging the finance committee to include renewals of the production and investment tax credits as part of any legislation that renews other credits.

"Furthermore, we risk weakening our national energy security by failing to foster such an important source of clean, domestic energy."

Two U.S. House of Representatives members from Iowa—Democrat Dave Loebsack and Republican Steve King—crafted a companion letter to the finance committee with 118 other signatures from around the House.

“This is exactly the kind of bipartisan effort needed to overcome the gridlock blocking the renewal of commonsense, popular and vital investments in clean energy," Boggs said. "It’s the 21st century: we have the technology to produce clean energy that doesn’t threaten our climate or our children’s future."

Political groups have been calling for tax-credit renewal before and after the 2013 expirations of the investment (ITC) and production (PTC) tax credits, but this is easily the largest group to band together. In November, 11 governors, known as the Governors Wind Energy Coalition, requested an extension from Congress. The same group also met with the Federal Energy Regulatory Commission in February to prepare the energy grid for more wind power.

In December, former U.S. Senate Finance Committee chair Max Baucus proposed a PTC extension, but only through 2016. In February, U.S. House of Representative Committee on Ways and Means Chairman Dave Camp, (R-MI), announced a PTC extension that would retroactively reduce the credit from about 2.3 cents per kilowatt-hour of produced energy to 1.5 cents. The incentive would then be eliminated in 10 years.

U.S. Rep. Charles Boustany, R-LA, recently declared the PTC to be "dead". Outside of tax credits, President Barack Obama proposed about $28 billion in renewable energy investments last month as part of the 2015 budget.

"Each day that passes without tax incentives in place for wind energy means more delay in expanding pollution-free renewable energy that never runs out, and a greater risk of long-term damage to America’s growing clean energy economy," Boggs said. "The Senate and the House should act quickly to restore the Production Tax Credit and the Investment Tax Credit for wind energy.”