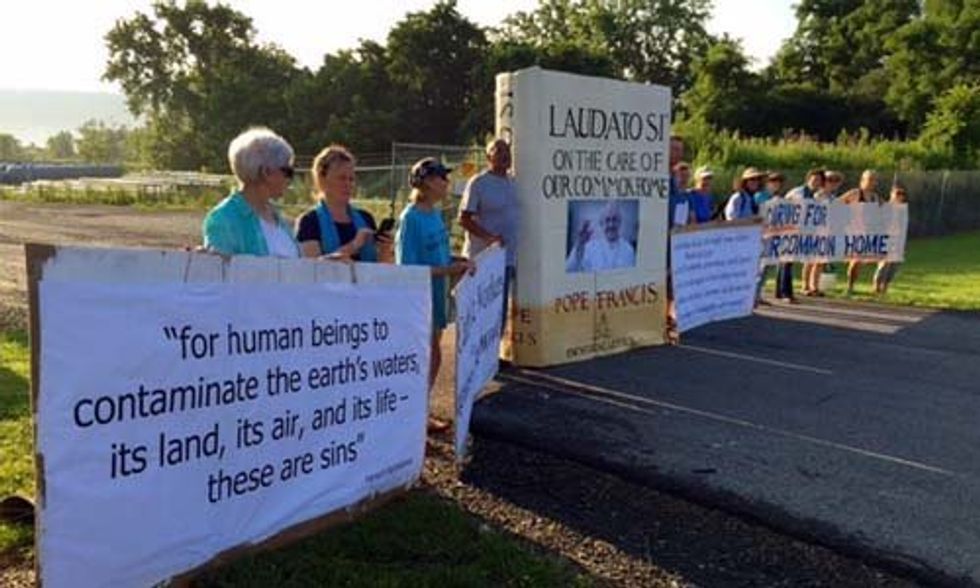 In an act of civil disobedience against gas storage in Seneca Lake salt caverns, 13 Finger Lakes residents, led by local members of the Ithaca Catholic Worker Movement, formed a human blockade shortly after sunrise this morning at the north entrance of Crestwood Midstream on Route 14.

Schuyler County deputies arrested the 13 people blockading Crestwood's gate shortly after 9:30 a.m. today as they sang and read from the Pontifical document. Photo credit: We Are Seneca Lake

Carrying with them a 7-foot tall replica of Pope Francis’ recent encyclical on climate change, Laudato Si! On Care for Our Common Home, they blocked traffic from entering or leaving the facility.

Carrying with them a 7-foot tall replica of Pope Francis’ recent encyclical on climate change, the Ithaca Catholic Workers blocked traffic from entering or leaving Crestwood. Photo credit: We Are Seneca Lake

Schuyler County deputies arrested the 13 people shortly after 9:30 a.m. as they sang and read from the Pontifical document. Their recitation continued the read-aloud from the encyclical that began on June 30, as part of earlier blockade that led to the arrests of 19 individuals, which continued on July 7, as part of an all-day blockade of 11 individuals that resulted in no arrests.

Immediately after their arrest, a large tanker truck labeled “TRADEBE—Emergency Response” sped through the gates. According to the Tradebe website, "TRADEBE’s Emergency Response Team is trained, equipped and ready to respond to hazmat, oil spills and other emergencies.”

As before, the protesters were taken into custody, charged with trespassing and released.

Today’s blockaders held banners that said, “Catholic Workers Against Crestwood” and “Caring for Our Common Home,” which references the title of the Pope’s letter.

The Catholic Worker Movement was founded by journalist Dorothy Day and social activist Peter Maurin in 1933. Its purpose is to “live in accordance with the justice and charity of Jesus Christ.”

“Today members of the Ithaca Catholic Worker join the Seneca Lake Defenders in their effort to resist the desecration of this beautiful Finger Lakes region. We bring with us a seven and a half foot tall replica of Pope Francis’ encyclical, Laudato Si! On Care For Our Common Home, to the gates of Crestwood Gas Storage facility ... Creation is a gift from God. It is our duty to care for it and not misuse it.”

Barbara Smith, 61, a Catholic Worker, mother of nine children and dairy farmer from the Town of Lodi in Seneca County, said:

“No one has the right to risk damaging this lake in any way for the short term gain of one company. Seneca Lake is only on loan to us but belongs ultimately to God, and we have been charged to protect it for the common good of future generations.”

The total number of arrests in the nine-month-old civil disobedience campaign now stands at 309, which has been ongoing since October 2014.

None of the protesters this morning had been previously arrested as part of the We Are Seneca Lake campaign, which opposes Crestwood’s plans for methane and LPG storage in lakeside salt caverns.

This Land Was Made for You and Me … And Fracking?