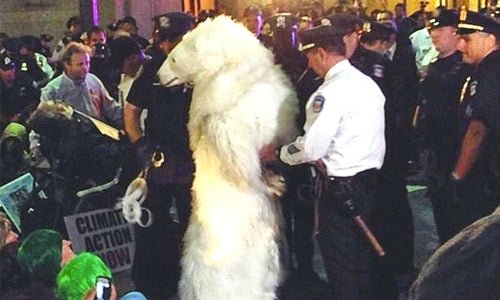 Shortly after the New York Stock Exchange 4 p.m. closing bell and hours after the protest began, New York City police arrested 102 people who were part of the Flood Wall Street protest yesterday, including several individuals in wheelchairs and one dressed as a polar bear. 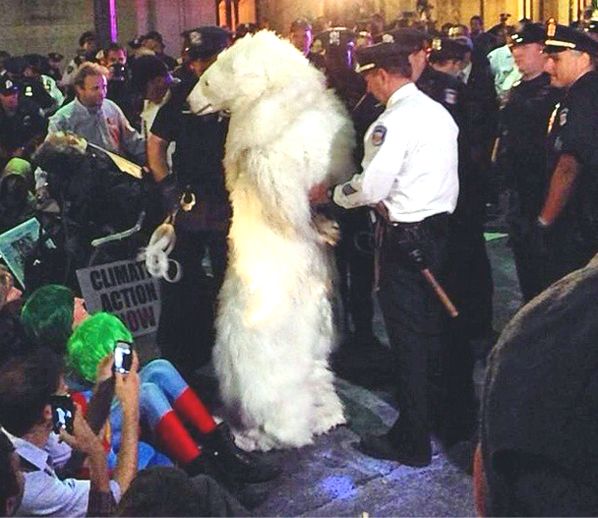 A day after the historic People’s Climate March in New York City, which attracted around 400,000 people, thousands of environmental activists dressed in blue flooded into the lower Manhattan Financial District. It started with speakers like Naomi Klein, Chris Hedges and Rebecca Solnit as demonstrators assembled in Battery Park for the march and nonviolent sit-in which began around Noon. The demonstration and sit-in were peaceful and festive, although they clogged the streets, blocking normal traffic flow through the district and police presence was heavy throughout the day. 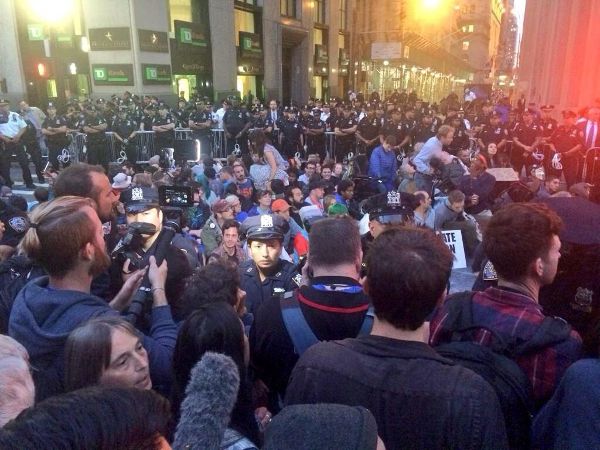 The demonstration was intended to call attention to how financial companies are fueling climate change and profiting from negatively impacting communities.

“Throughout history, people have engaged in nonviolent civil disobedience in response to moral crises, when political leaders have failed to act,” said Vida James, a Flood Wall Street organizer. “What could constitute more of a moral crisis than the health and survival of our planet, our communities and our grandchildren?” 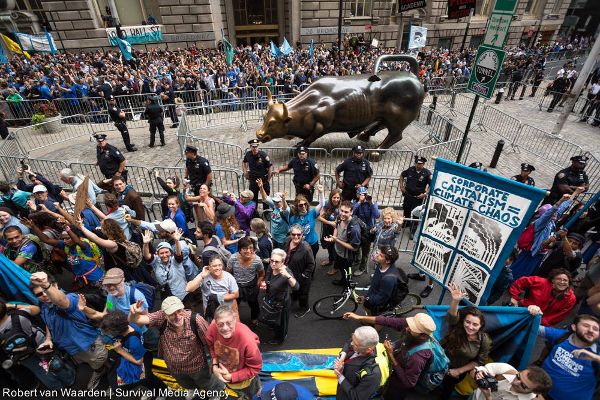 “World leaders have failed all of us on the climate crisis, and frustration has hit a tipping point—not just for the environmental movement but for people around the globe,” said Center for Biological Diversity executive director and co-founder Kieran Suckling, who was among those arrested along with co-founder Peter Galvin.

“There have never been so many people from so many parts of the world speaking in a united voice for climate action. What happened this week will only build on itself until world leaders finally act. Global warming is putting people, wildlife and indeed the entire planet on the path toward disaster. President Obama and other world leaders have an indisputable moral obligation to take action, but nothing they’ve done so far comes close to matching the magnitude of the crisis we face.”

Democracy Now! went down to Wall Street and talked to some of the protestors about why they were there, including one of the members of the Great March for the Climate, which is now crossing the country from Los Angeles to Washington D.C. They also captured footage of a young man being arrested. Watch the video.