10,000 March in Philly Calling for a Clean Energy Revolution 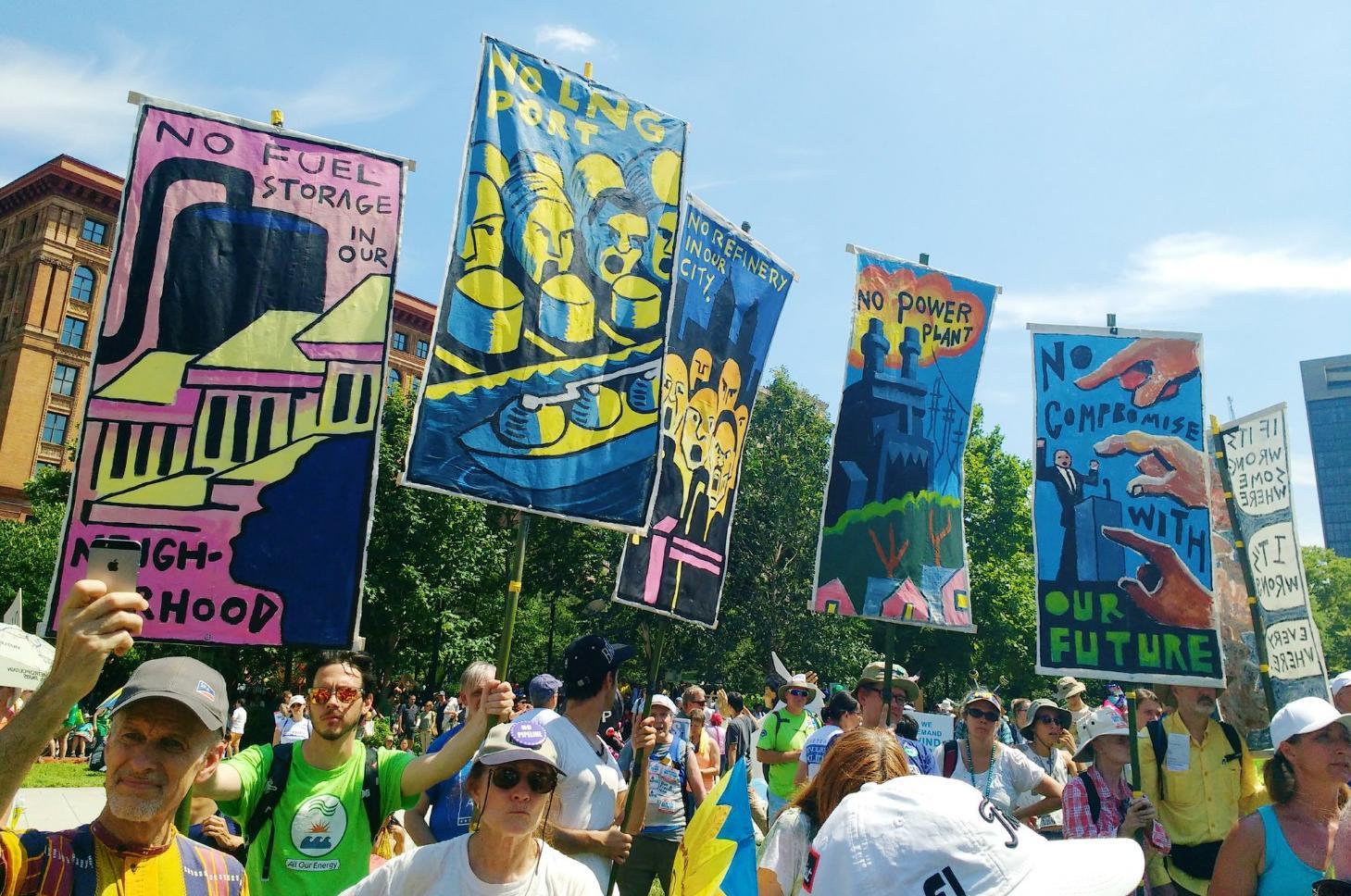 At high Noon Sunday, with temperatures heading toward 95 degrees, I’m confident I was not the only one preparing to march through the streets of downtown Philadelphia who recalled that old elementary-school story about the wig-wearing drafters of the Declaration of Independence huddled inside of Independence Hall on a sweltering July day.

In fact, on the eve of the Democratic National Convention (DNC), Independence Hall was the literal destination of this march to declare our independence from fossil fuels.

In spite of the dangerous heat—or maybe precisely because there are now simply way too many extremely hot days like this one—marchers showed up in huge numbers and they brought with them a revolutionary frame of mind.

Convened by Pennsylvanians Against Fracking and Americans Against Fracking—for which I serve as science advisor—the March for a Clean Energy Revolution attracted more than 10,000 people and was endorsed by more than 900 environmental, health, labor, political, faith, justice, indigenous and student organizations groups from all 50 states of the union.

The day kicked off with a press conference at city hall that featured local and national advocacy leaders as well as individuals from communities decimated by various fossil fuel extraction, transport and storage projects.

All together, these speakers called on current and future elected leaders to ban fracking, keep fossil fuels in the ground, stop dirty energy, transition to 100 percent renewable energy and ensure environmental justice for all.

“As the first national organization in America to call for a ban on fracking, Food & Water Watch has seen the movement expand dramatically, becoming a major issue in the battle over the Democratic nomination for the presidency,” the organization’s founder and executive director Wenonah Hauter said. Food & Water Watch served as a lead organizer of the march.

“Today, after listening to the science, more Americans are opposed to fracking than support it,” Hauter noted, referring to the most recent Gallup poll that shows that Americans oppose fracking 51 to 36 percent.

Also speaking at the press conference, Teresa Hill of ACTION United decried the plan to turn Philadelphia itself into a major energy hub for fracked gas, which includes a proposed import/export terminal on the Delaware River.

Hill specifically called on Gov. Tom Wolf to say no to the expansion of oil and gas at the Southport site.

“Over one quarter of children in Philadelphia have asthma, primarily in lower income communities of color. We have the right to breathe, but corporations like the Philadelphia Energy Solutions oil refinery are poisoning us,” Hill said.

Pennsylvania’s Gov. Wolf is serving this week as the honorary chair of the DNC Host Committee.

The final speaker at the press conference—who also addressed the crowds at the rally at Independence Hall that followed the march—was soft-spoken Laura Zuñiga Cáceres, daughter of Honduran environmental leader and Goldman Prize winner, Berta Cáceres, who was recently assassinated. In a short, moving speech that was translated from Spanish, Cáceres described the environmental struggles of the Lenca people and their link to policies crafted here in the U.S.

Sharing a signature quote from her mother that seemed as much a comment on the climate crisis as on the personal threats faced by the world’s indigenous peoples who confront it, Cáceres exhorted, “Wake up, humanity! Time is running out!” 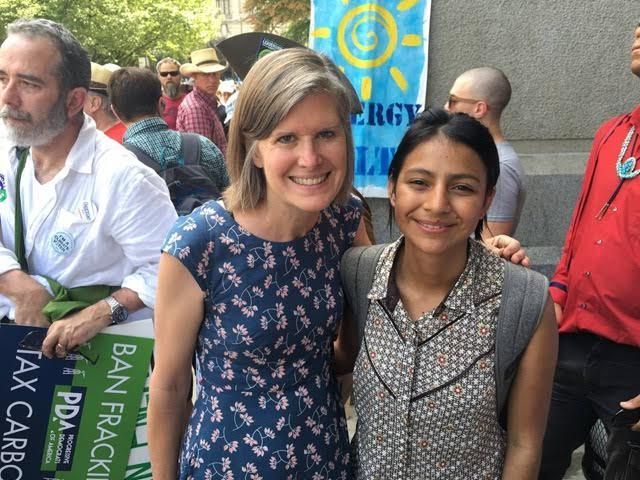 During the march itself, I walked with the We Are Seneca Lake brigade. Wearing blue and carrying banners from past civil disobedience blockades, the Seneca Lake defenders—many of whom had been previously arrested in actions to stop gas storage in underground lakeside salt caverns—attracted considerable attention from marchers from other grassroots groups who were fighting fossil fuel infrastructure projects that were threatening their own communities. These include pipelines, compressor stations, LNG export facilities, oil trains and new gas power plants. 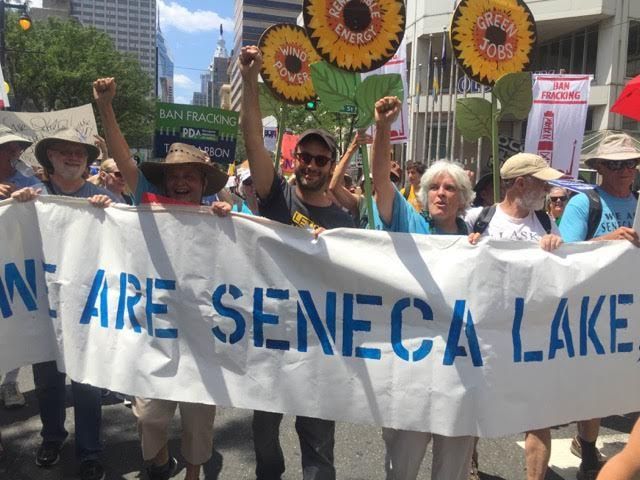 Filmmaker and Seneca Lake defender Josh Fox joined fellow defenders from We Are Seneca Lake along the march route. Fox’s new film, How to Let Go of the World and Love All the Things Climate Can’t Change, screened later that night as part of an outdoor concert in Vernon Park.Colleen Boland

All together, these marchers formed the inFRACKstructure contingent in the March for a Clean Energy Revolution. In my opinion, this contingent carried the most creative signs and art during the march. 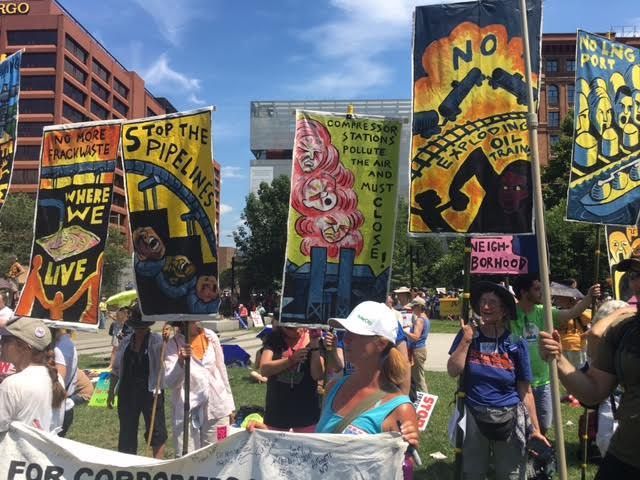 Intersectionality, to use the buzzword of the climate justice movement, was on display everywhere. The peace and justice community had a visible and vocal presence at the march, as did the public health community and the labor movement. The message, in both signs and words: replacing fossil fuel dependency with investments in renewable energy serves to de-escalate political conflicts around the globe, prevent chronic diseases linked to toxic exposure and create jobs that don’t blow workers up. 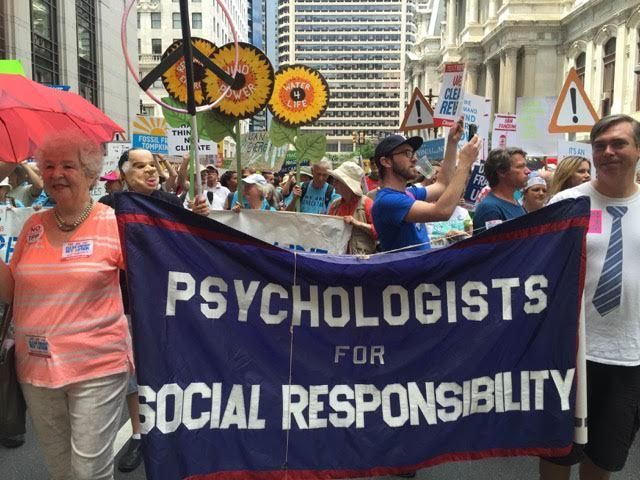 Intersectionality abounded at the March for the Clean Energy Revolution. These psychologists make the case that a dying planet creates trauma and mental health risks.

“Climate change is already causing conflicts and crises around the world, from Louisiana to Syria. We need to make giant leaps towards a clean energy economy and put an end to the vicious cycle of dirty wars, climate refugees and reliance on dirty energy,” Alesha Vega of the Coalition for Peace Action said.

In her address at the closing rally, Karuna Jaggar, executive director of Breast Cancer Action, said that a national ban on fracking was preventive medicine.

“We are marching to demand an end to fracking and other dangerous drilling practices that rely on toxic chemicals and are linked to an array of deadly diseases and disorders,” Karuna said. “As health professionals, public health experts and people concerned with protecting health, we are gravely concerned about the mounting scientific evidence showing that these chemicals are regularly contaminating the water, the air and ultimately our bodies.”

Indeed, just last week a Johns Hopkins study, published in JAMA Internal Medicine, found that people with asthma who live near drilling and fracking operations in Pennsylvania are 1.5 to 4 times more likely to suffer asthma attacks than those who live farther away.

According to another recent peer-reviewed study that analyzed all of the relevant literature on fracking, “The great majority of science contains findings that indicate concerns for public health, air quality and water quality.”

As the post-march rally at Independence Hall reached its rousing crescendo, a small plane circled overhead, pulling a sign that read: “Protect Unborn Children.” It was a message that was surely intended not for us but the arriving delegates of the DNC.

And yet, as the plane continued to circle, I couldn’t help but think about the comprehensive study published last year that linked fracking to premature births and at-risk pregnancies. Data on more than 10,000 pregnancies in Pennsylvania from 2009 to 2013 showed that the odds of premature births increased 40 percent when expectant mothers live in heavily fracked communities.

Premature birth is the number one cause of infant mortality in the U.S., as well as the leading cause of disability.

And thus did the intersectionalities up in the sky fly past us.

Meanwhile, down on the ground, the March for a Clean Energy Revolution concluded with a monumental artistic display that transformed a drill rig into a sun.