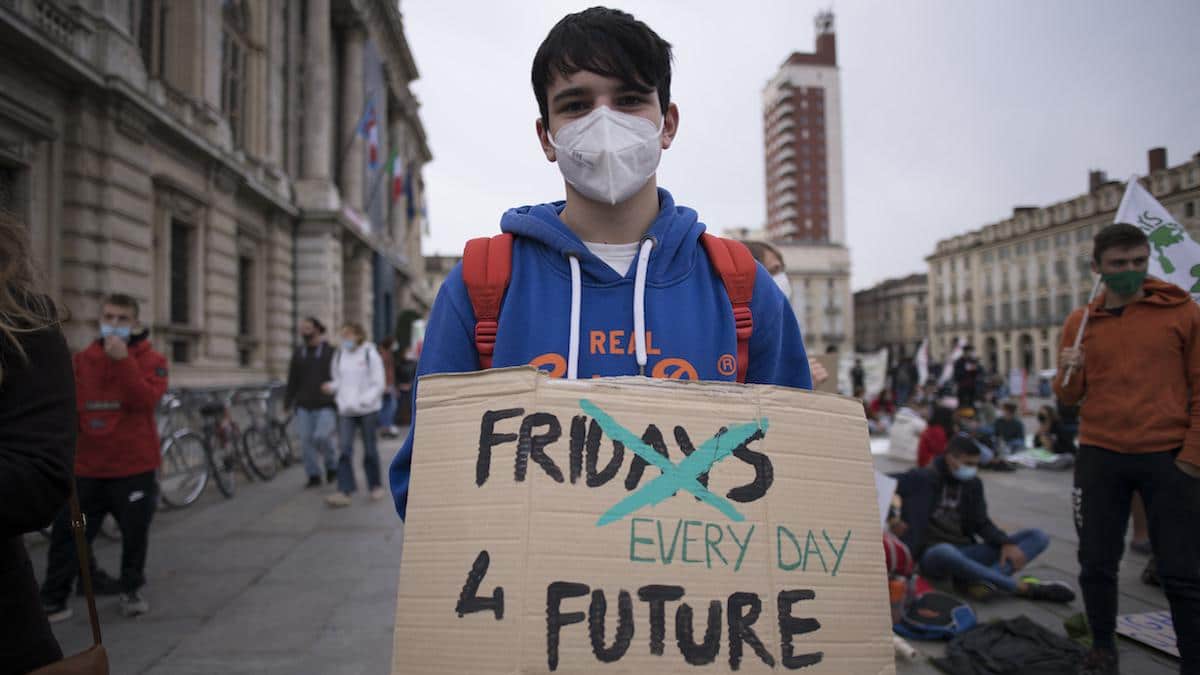 A participates in a Fridays for Future climate strike on Oct. 9, 2020 in Turin, Italy. Stefano Guidi / Getty Images

Fridays for Future, the youth-led global group inspired by Swedish campaigner Greta Thunberg, announced Wednesday that its next international day of climate strikes will occur on March 19 of this year with a demand for “immediate, concrete, and ambitious action” directed at world leaders who have in recent years talked seriously about the urgent need to address the planetary emergency but stalled dangerously by failing to make those words a reality.

“No more empty promises,” said the group in its announcement for global strikes that will take place on every continent, led by students and their allies who believe that the rapidly heating world is an existential threat to life as humanity has come to know it and the insufficient and voluntary emission reduction targets like the ones at the center of the Paris agreement — which nations are not even on track to meet — are worthless unless here-and-now policies are put into action immediately to bring carbon and other greenhouse gas pollution under control.

“If we don’t act now, we won’t even have the chance to deliver on those 2030, 2050 targets that world leaders keep on talking about,” said Mitzi Jonelle Tan from the Philippines, one of the group’s organizers. “What we need now are not empty promises, but annual binding carbon targets and immediate cuts in emissions in all sectors of our economy.”

In 2010 our leaders signed "ambitious goals to protect wildlife and ecosystems”. By 2021 they'd failed on every single one. Each day they choose not to act. Instead they sign more “ambitious" non-binding future goals while passing policy locking in destructive business as usual. https://t.co/MSdUoQjx7D

As part of the organizing effort, the group has posted a worldwide map of planned actions and a sign-up form for those wishing to register or create an event.

Join us in the fight for climate justice this March 19. Coming back more united than ever, we will keep fighting. Leaders of the world, we are fed up. We say #NoMoreEmptyPromises! Immediate action NOW!

As part of the organizing effort, the group has posted a worldwide map of planned actions and a sign-up form for those wishing to register or create an event.

João Duccini, an organizer from Brazil, said that the climate crisis — with 2020 tying the record for the hottest year on record — “is not a far-off catastrophe” but something people in his country and around the world are already experiencing. “Heat waves, droughts, floods, hurricanes, landslides, deforestation, fires, loss of housing and spread of diseases,” he said, “this is what the most affected people and areas are dealing with more and more frequency today. Our lives depend on immediate action.”

According to the group’s announcement for the strike:

Those in power continue to only deliver vague and empty promises for far off dates that are much too late. What we need are not meaningless goals for 2050 or net-zero targets full of loopholes, but concrete and immediate action in-line with science. Our carbon budget is running out. The climate crisis is already here and will only get worse, so if we are to avoid the worst case scenarios, annual, short-term climate binding targets that factor in justice and equity have to be prioritized by the people in charge.

“When your house is on fire,” said Thunberg on Wednesday, “you don’t wait for 10, 20 years before you call the fire department; you act as soon and as much as you possibly can.”