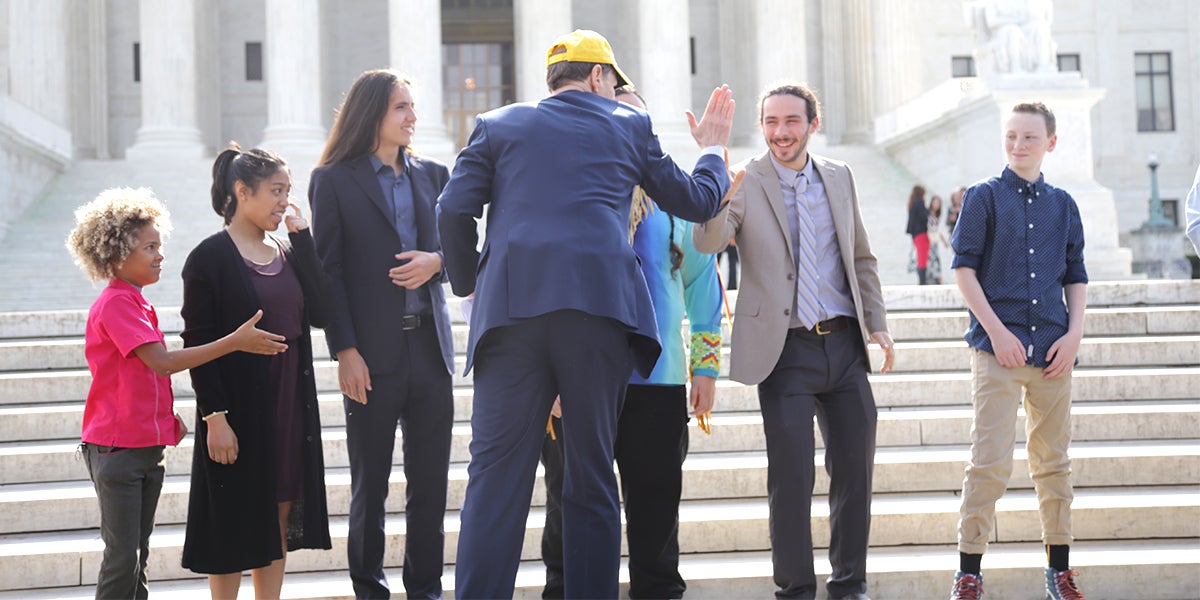 The order follows the Trump administration’s remarkable Tuesday night filing of a notice giving Judge Aiken a deadline of June 9 to issue her order.

In that notice, the Department of Justice threatened, “In the absence of such resolution by this Court, the United States will seek … review and relief in the Court of Appeals.” The Trump administration is alluding to an intention to seek a writ of mandamus, an extraordinary remedy that is rarely granted, from the higher court.

“We are on our way to trial!” said Julia Olson, co-lead counsel for plaintiffs and executive director of Our Children’s Trust. “With industry walking away from the case and the Trump administration’s effort at procedural delay firmly rejected, we can focus on the merits of these youths’ constitutional claims.”

“Defendants’ threat to run directly to the Ninth Circuit if this Court does not abide by a unilaterally imposed ‘deadline’ is another matter … belief that it is legally entitled to an immediate ruling on a motion it submitted three months ago is rather ironic given that it waited four months to file the request for interlocutory certification in the first place.”

Judge Aiken’s order was an adoption of the May 1 findings and recommendation issued by Magistrate Judge Thomas Coffin, who is overseeing the pretrial and discovery portion of the case. Judge Coffin has ruled that an interlocutory appeal “would put the cart before the horse, and thus fail to satisfy the standards for interlocutory appeal.”

“The more evidence we gather for our case, the more I realize how decisively we can win at trial,” said 20-year-old Alex Loznak of Roseburg, Oregon, one of 21 youth plaintiffs. “It’s no wonder the Trump administration wants to avoid the trial by seeking an unwarranted, premature appeal. Today’s ruling brings us one step closer to trial and to winning our lawsuit.”

Justice Anthony Kennedy, writing for the majority of the Supreme Court, has explained that mandamus is a “drastic and extraordinary remedy” reserved for “only exceptional circumstances.” Cheney v. U.S. Dist. Court for D.C., 542 U.S. 367, 380 (2004).

Last month, motions were filed by three fossil fuel industry intervenor-defendants: the National Association of Manufacturers, the American Petroleum Institute, and the American Fuel & and Petrochemical Manufacturers, requesting the court’s permission to withdraw from the litigation. For any defendant to leave the litigation, U.S. Magistrate Judge Thomas Coffin must grant permission. That matter is still pending.

Juliana v. United States was brought by 21 young plaintiffs who argue that their constitutional and public trust rights are being violated by the government’s creation of climate danger. The case is one of many related legal actions brought by youth in several states and countries, all supported by Our Children’s Trust, seeking science-based action by governments to stabilize the climate system.