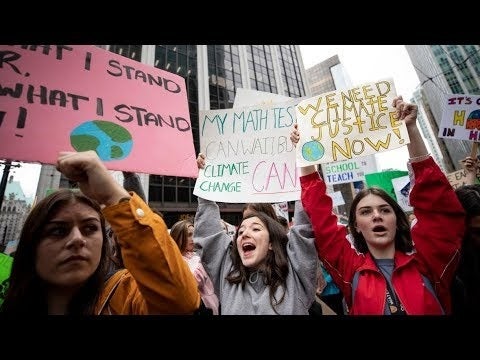 During last week’s Fridays for Future school strike, 15 Canadian kids ranging in age from 10-19 stood on the steps of the Vancouver Art Gallery to announce that they filed suit against the Canadian government for injuries they allege stem from the climate crisis, according the Vancouver Sun.

The suit, called La Rose v. Her Majesty the Queen, claims the Canadian government has violated their constitutional right to “life, liberty, and security of the person” by permitting, promoting and enabling fossil fuel development in spite of knowing the risks associated with climate change, as Nature reported. The plaintiffs argue that the government’s championing of fossil fuels infringes on their rights under the Canadian Charter of Rights and Freedoms and is violating the public trust doctrine, as Climate Liability News reported.

The lawsuit also states that the climate crisis will interfere with basic equality rights, since the most severe effects of will mostly affect future generations who will be disproportionally harmed by current environmental degradation.

“Basically, what we’re arguing is that the courts must hold this generation to account for harms that are being done to the next,” said Chris Tollefson, co-counsel for the plaintiffs and a specialist in environmental law at the University of Victoria in Canada, as Nature reported.

“We want to stand up now and say that our future matters to us,” said 17-year-old Sierra Robinson, one of the plaintiffs, as Grist reported. “We want our voices to be heard, and we want our climate to be protected for us in the future.”

The plaintiffs have asked the court to order the federal government to develop and to implement an enforceable plan to curb greenhouse gas emissions “in a manner consistent with what best available science indicates is needed for the federal government to protect young Canadians, do its fair share to stabilize the climate system and avert the catastrophic consequences of climate change,” court documents read.

Hiroki Masuzumi, a 19-year-old plaintiff from the remote town of Fort Good Hope in the Northwest Territory, told the CBC that the evidence of the climate crisis is apparent where she lives on the banks of the Mackenzie River.

“The weather patterns are changing drastically and the ecosystems are also changing. Warmer weather, warmer winters,” Masuzumi said. “It’s a little bit worrying. It’s kind of scary once you notice this stuff happening.”

The plaintiffs are represented by Arvay Finlay and Tollefson Law Corporation, with additional support from Pacific Centre for Environmental Law and Litigation (CELL), David Suzuki Foundation and Our Children’s Trust, which is leading the landmark American youth climate case Juliana v. United States, according to Climate Liability News.

Besides the U.S. and Canada, similar cases have been filed by youth in the Netherlands, Norway, Colombia, New Zealand and Pakistan. Only the Netherlands’ case has been successful so far, according to CTV News.

The Dutch case, which was filed on behalf of 900 citizens, ordered the government to cut the cut the country’s greenhouse gas emissions by at least 25 per cent by 2020 from benchmark 1990 levels, as CTV News reported.

The case in Canada was filed just days after Prime Minister Justin Trudeau won reelection, though his government lost its parliamentary majority. The case hangs on an untested legal theory since the Canadian constitution does not name a healthy environment as a right. Therefore, the plaintiffs need to make the case that the adverse effects of the climate crisis will threaten other fundamental rights, as Nature reported.

It also offers minors, who have no voice in elections, a chance to have their say in future policy. “This lawsuit is helping me express my anger and my fear,” said Ira Reinhart-Smith, a 15-year-old plaintiff, as Nature reported. “My generation and generations to come are going to be exposed to things that the world has never been exposed to before.”