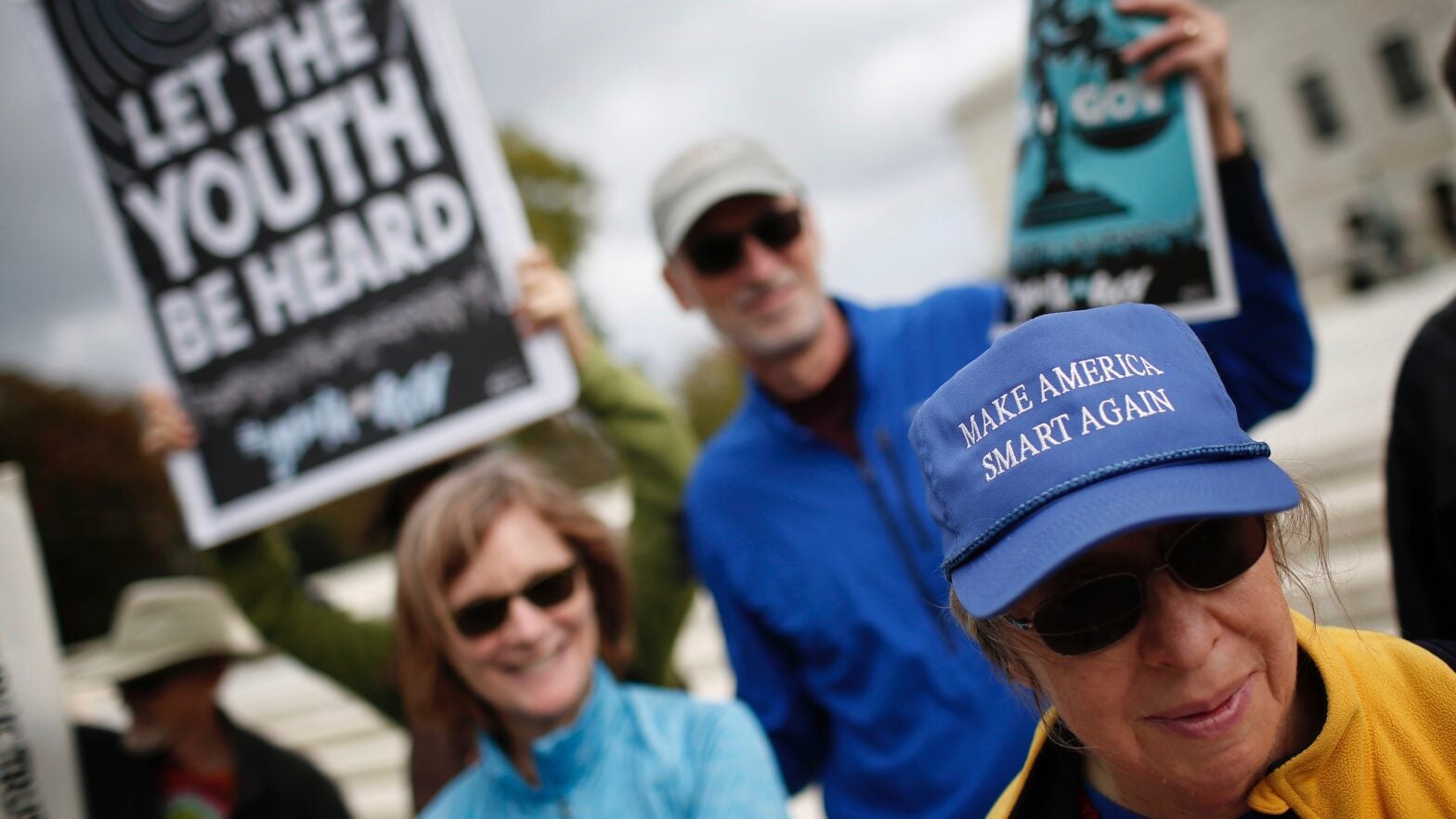 Protesters attend a rally outside the U.S. Supreme Court held by the group Our Children's Trust Oct. 29, 2018 in Washington, DC. The group and the plaintiffs have vowed to keep fighting and to ask the full Ninth Circuit to review Friday's decision to toss the lawsuit. Win McNamee / Getty Images

An appeals court tossed out the landmark youth climate lawsuit Juliana v. United States Friday, arguing that the courts are not the place to resolve the climate crisis.

The three-judge panel on the Ninth Circuit Court of Appeals agreed with the 21 young plaintiffs that the U.S. government had actively contributed to climate change by supporting a fossil-fuel based economy and that the young people had been injured by its actions, The Guardian explained. However, the majority ruled that the courts did not have the power to order a plan for government action to address the crisis, as the 12-to-23-year-old plaintiffs had requested.

“Reluctantly, we conclude that such relief is beyond our constitutional power,” Judge Andrew D. Hurwitz wrote in the court’s opinion. “Rather, the plaintiffs’ impressive case for redress must be presented to the political branches of government.”

THIS ISN’T OVER! BREAKING: Today, a divided Court recognized the gravity of the evidence on the youth plaintiffs’ injuries from climate change and the government’s role in causing them. 1/3 pic.twitter.com/DVcBK8tocq

The decision raises the question of where young people can turn to ensure their futures are protected.

“The idea that their only recourse is to go to the very branches of government that are violating their rights when half of them can’t even vote is a preposterous notion,” the young people’s lead lawyer Julia Olson told The New York Times.

In her dissent, Judge Josephine L. Staton agreed, criticizing her colleagues for “throw[ing] up their hands.”

“Where is the hope in today’s decision?” she wrote. “Plaintiffs’ claims are based on science, specifically, an impending point of no return. If plaintiffs’ fears, backed by the government’s own studies, prove true, history will not judge us kindly. When the seas envelop our coastal cities, fires and droughts haunt our interiors, and storms ravage everything between, those remaining will ask: Why did so many do so little?”

The lawsuit was filed in 2015 by the 21 plaintiffs with the support of the nonprofit Our Children’s Trust, according to Climate Liability News. It argues that by supporting a fossil-fuel based economy despite evidence it was contributing to climate change, the federal government violated the public trust and the young plaintiffs’ constitutional rights to life, liberty and property.

For example, plaintiff Levi Draheim, 12, has had to repeatedly evacuate his home in Satellite Beach, Florida because of more extreme storms, according to The Guardian. Jaime Butler, 19, has been separated from her home and relatives in Navajo Nation because of water insecurity.

The federal government has tried to dismiss the case several times since it was filed, according to Climate Liability News. And Assistant Attorney General Jeffrey Bossert Clark told The New York Times that the government was “pleased with the outcome” of Friday’s decision.

However, Our Children’s Trust and the plaintiffs have vowed to keep fighting and to ask the full Ninth Circuit to review the decision, the group announced in a press release.

“We will continue this case because only the courts can help us,” Draheim said. “We brought this lawsuit to secure our liberties and protect our lives and our homes. Much like the civil rights cases, we firmly believe the courts can vindicate our constitutional rights and we will not stop until we get a decision that says so.”

If the full Ninth Circle refuses to hear the case, the group would then have to appeal to the Supreme Court, Climate Liability News explained.