‘We Have So Much More to Do’: Youth Climate Activists Declare as Global Elite Close Out Davos Forum 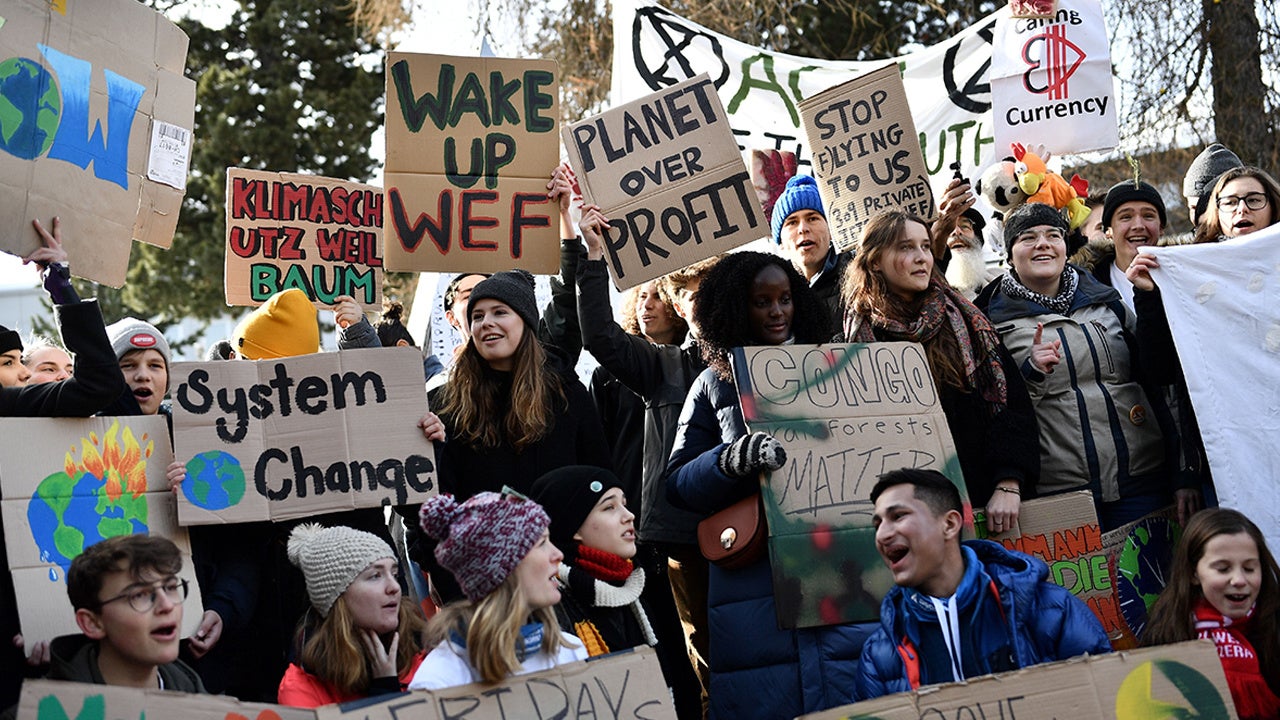 Protesters march during a "Friday for future" youth demonstration in a street of Davos on Jan. 24 on the sideline of the World Economic Forum annual meeting. FABRICE COFFRINI / AFP / Getty Images

Youth climate activists marched through the streets of Davos, Switzerland Friday as the World Economic Forum wrapped up in a Fridays for Future demonstration underscoring their demand that the global elite act swiftly to tackle the climate emergency.

Among those taking part in the march were Rise Up Movement founder Vanessa Nakate of Uganda and School Strike for Climate trailblazer Greta Thunberg of Sweden. Thunberg has already taken forum participants to task this week for their vacuous promises and insufficient plans to rein in planet-cooking emissions.

WEEK 59 #ClimateStrike in Davos w/@GretaThunberg @Luisamneubauer @isabelle_ax and so many more amazing activists! We got a lot of work done this week, but we have so much more to do. See you next year #WEF2020 #WEF20 @wef pic.twitter.com/EGp9GesOUq

Thunberg’s headline-grabbing voice is just one part of a loud and youthful chorus at the summit. One of the stages for this chorus has been the “Arctic basecamp,” a scientist-created concept to highlight at the annual forum the climate crisis’s particular threat to the region.

The basecamp hosted several young activists at this year’s summit, including Nakate, who talked to CNBC International about the discrepancy between the campers and the jet-setting forum-goers.

“We are just trying to show them that we are doing the right thing despite the fact that we are not sleeping or staying in the best conditions,” Nakate told the outlet. “And, as they are enjoying their first class (flights), they should know that there are people who are actually living in worse conditions.”

“So, we are practically representing those people who are already facing the impact of the climate crisis. It is time to get out of our comfort zones,” she added.

During the discussion, Nakate expressed her frustration with the lack of concrete and sufficient commitments at summit, saying, “What they do is speak and promise but they don’t take action.”

Corporate media coverage of the climate crisis also came in for criticism, with Nakate saying the recent torrential rains falling in African nations have not received the scope of coverage as other disasters elsewhere in the world.

“I have no problem with them reporting other disasters, but we saw the California fires and they would report about them every day,” said Nakate. “We’ve seen the Australian fires, and they’ve been reporting about them every day, and donations have been coming out to those kinds of people. It really saddens me because there are people as well in African countries.”

That erasure of humanity was punctuated Friday, when Nakate said she was temporarily “cropped out” of a photo accompanying an Associated Press article. The omission, Nakate suggested, was intentional.

If you look very carefully, you can see where @AP cropped black climate activist @vanessa_vash out of the photo
It might surprise some, but black and brown people being affected by the #ClimateEmergency are also helping to find the solutions too#ClimateCrisis pic.twitter.com/LoEzE81g67

In a video she shared on Twitter, Nakate said, “This is the first time in my life I understood the definition of racism….Does it mean that I have no value?”

“Africa is the least emitter of carbon but we have [been] the most affected by the climate crisis. But you erasing our voices won’t change anything.”

Share if you can
What it means to be removed from a photo! https://t.co/1dmcbyneYV

BuzzFeed reported on the photo change and included a comment from AP.

“There was no ill intent,” an AP spokesperson told the outlet. “AP routinely publishes photos as they come in and when we received additional images from the field, we updated the story. AP has published a number of images of Vanessa Nakate.”