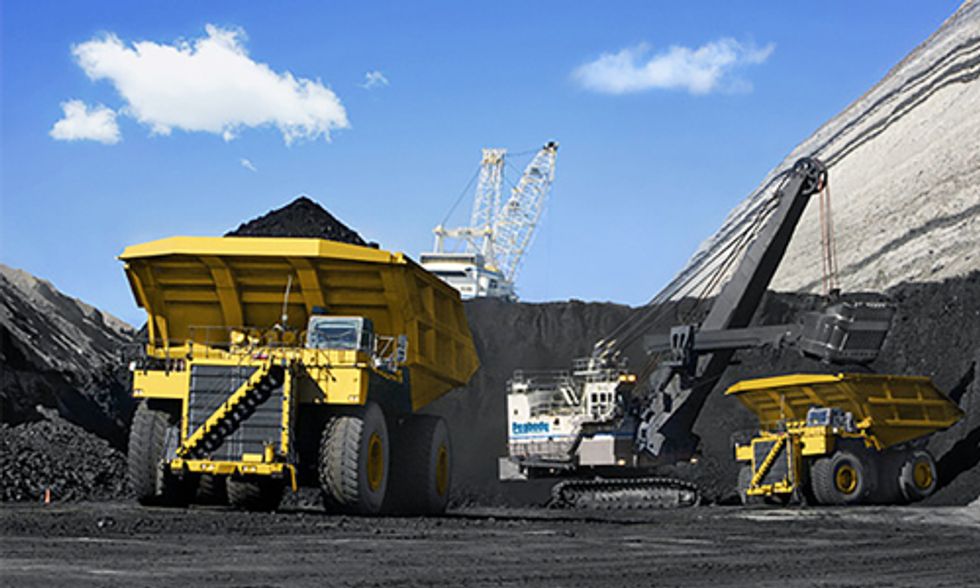 Peabody Energy, the top miner of coal in the world, may soon file for Chapter 11 bankruptcy.

The news comes as Peabody's stock closed Wednesday at a six-month low of $2.19 per share—a 46-percent fall. Peabody noted its potential bankruptcy in the company's March 16 U.S. Securities and Exchange Commission Form 10-K.

“If we are not able to timely, successfully or efficiently implement the strategies that we are pursuing to improve our operating performance and financial position, obtain alternative sources of capital or otherwise meet our liquidity needs, we may need to voluntarily seek protection under Chapter 11 of the U.S. Bankruptcy Code,” stated Peabody.

Peabody's announcement coincides with a recent string of tough blows faced by the coal industry, including both Arch Coal's and Alpha Natural Resources' filing for Chapter 11 bankruptcy, as well as fellow coal mining giant Foresight Energy's announcement in its recently-filed Form 10-K that it may await the same fate.

Foresight's stock shares closed at $1.62 on the news, even lower than Peabody's price and down roughly 26-percent on the day.

In a press release, Peabody alluded to current atrocious coal market conditions, with the price per ton stagnating at $40 per ton—down from a price of $200 per ton in 2008—as the rationale for its bankruptcy restructuring.

“As previously announced, the company continues to address the challenges of the current industry environment by focusing on its three core priorities: operational, financial and portfolio,” stated the press release. “Within the financial area, the company has dual objectives of preserving liquidity and reducing debt. Actions related to these objectives have included extensive discussions with debt holders and the company expects to have further discussions with lenders.”

The bankruptcy news does not signal, though, that humanity has reached a climate Utopia. Indeed, as the U.S. Energy Information Administration (EIA) reported, natural gas power generation via hydraulic fracturing (fracking) will likely surpass coal power generation for the first time ever on the U.S. power grid.

“Between 2000 and 2008, coal was significantly less expensive than natural gas and coal supplied about 50 percent of total U.S. generation,” wrote EIA. “However, beginning in 2009, the gap between coal and natural gas prices narrowed, as large amounts of natural gas produced from shale formations changed the balance between supply and demand in U.S. natural gas markets.”

Renewables have also increased as a share of the U.S. energy grid consumption portfolio, from approximately 1 percent in 2005 to 8 percent today, according to the EIA's data. Unfortunately, for advocates of a sustainable future, about 50 percent of that renewable energy comes from a not-so-clean and not-very-renewable biomass.

“Peabody’s bankruptcy is no different than when the banks crashed our economy in 2008,” Dell Breeland, St. Louis resident and member of Missourians Organizing for Reform and Empowerment, said in a press release.

“Unless we stand up, the bankruptcy court will leave ordinary people—coal miners and impacted communities—out to dry, while CEOs make millions of dollars. We are coming together to demand a true just transition.”

The “just transition” theme was also expressed by the Rainforest Action Network, which noted the company is under investigation by the New York Attorney General for its climate change denial.

“It is critical that a bankruptcy process for Peabody entails a just transition for workers and the environment, not organized looting by creditors and executives,” said Amanda Starbuck, program director at Rainforest Action Network.

“As a corporation, Peabody practiced bad business all around—with poor strategic choices, abysmal treatment of its workers, gross negligence in communities where it operated and consistent denial of climate science.”