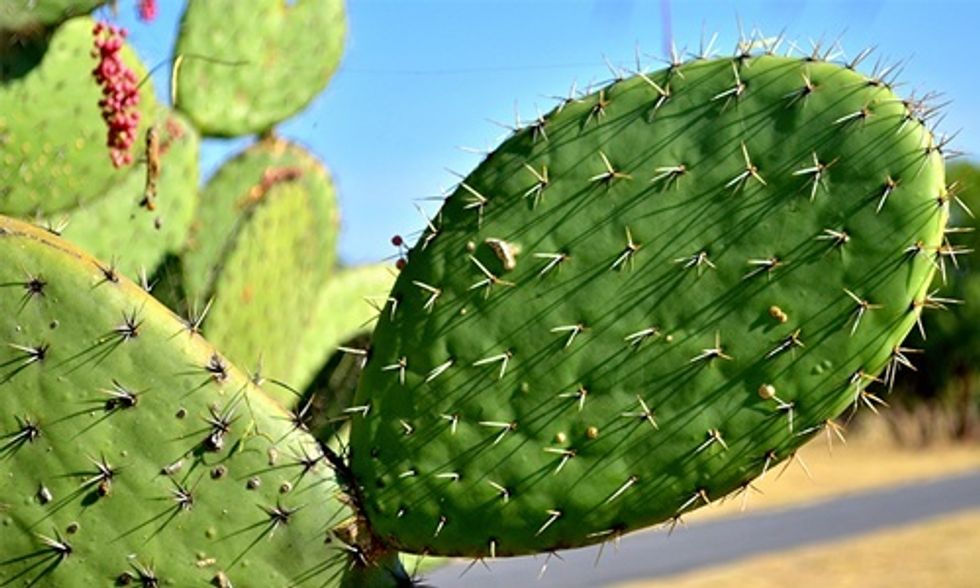 Nopalimex has built the world's first cactus-powered plant in Mexico. The company is utilizing a digester to make biogas from prickly pear cacti. In addition to powering Nopalimex's operations, the digester's 8-ton daily production will fuel the town of  Zitacuaro's vehicle fleet in central Michoacan state, Noticias MVS reported.

"The fruit or prickly pears are pureed, mixed with manure, then left to decompose, producing methane," Climate Home explained. "That gas is used for fuel and burned to generate enough electricity for 300 homes at 50 percent cheaper than grid prices."

In the city's vehicle fleet, the cactus fuel is expected to decrease gasoline use by at least 40 percent, Antonio Soto Sanchez, secretary of Economic Development, told Noticias MVS.

The idea came to Nopalimex's Rogelio Sosa about a decade ago when he was looking for ways to lower the energy bills for his company, which manufactures corn and cactus chips.

Economic Development Secretary Adrian Lopez hailed the project as a great example of the renewable energy projects Mexico should be adopting. Last month, the Latin American nation mandated that renewables supply 35 percent of the country's electricity by 2024.

And, according to Gizmodo, there's huge potential for prickly pear cacti as a biofuel as it could help "fuel our drought-stricken world."

"What makes prickly pear so interesting as a fuel for making biogas or other forms of biofuel is that it can be grown in places where traditional energy crops can’t. Imagine vast fields of cacti in remote, arid areas of the country, where normal crops can’t grow. It wouldn’t suck up the resources or space needed to feed people, as current bioenergy crops are criticized as doing."

Citing research from a group of Oxford scientists, "growing prickly pear at that scale might actually help produce more food in drought-stricken lands, because converting organic waste into biogas creates its own waste. ... Prickly pear absorb a ton of water, and after digestion happens and the biogas is made, liquid and solid fertilizer will be leftover. That, in turn, could be used to better cultivate crops in areas that normally couldn’t support them."

One owner of a prickly pear biogas facility in Chile, Rodrigo Wayland Morales, told Renewable Energy World he sees vast potential for the crop. He has cactus biogas projects in various stages of completion in Mexico, India, Chile, Brazil, Ecuador and Colombia.

He believes the geography of his native Chile makes it an ideal location for the crop. “Chile could desalinate sea water and grow the cactus in the desert,” Morales said.  “I imagine the Atacama Desert with cactus, producing the energy that our country needs.”

Can We Make Our Masks Fully Eco-Friendly?