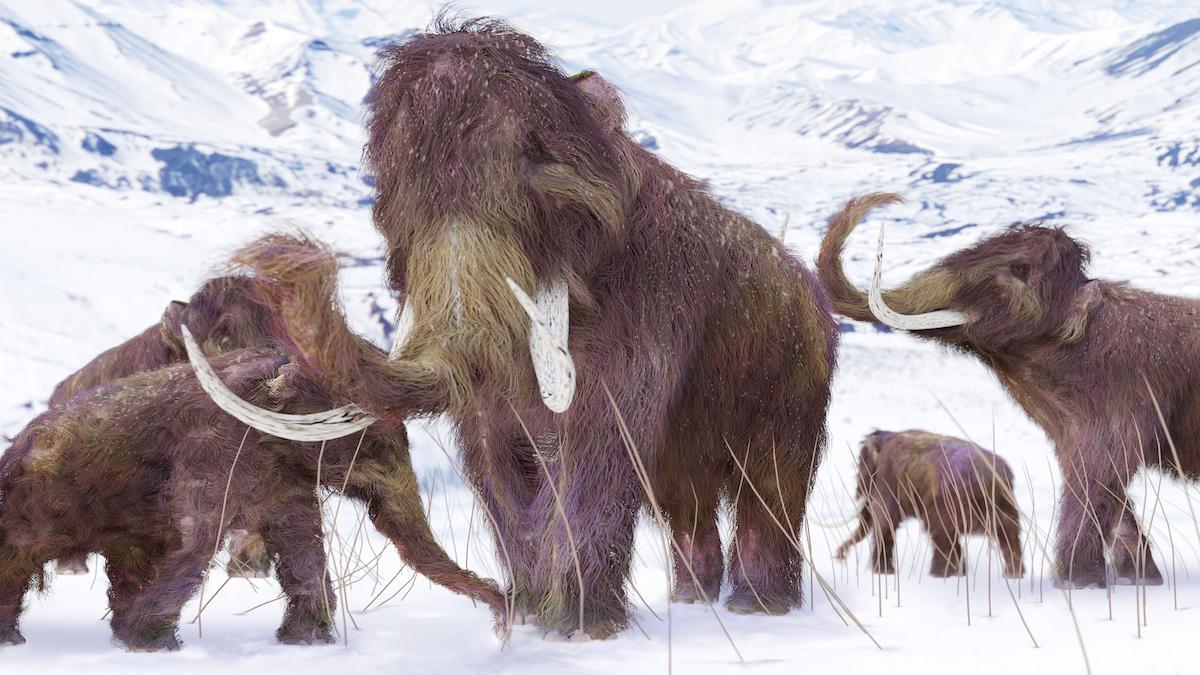 An illustration of a family of woolly mammoths grazing on what is left of the grasses as winter approaches in an Ice Age scene. Aunt_Spray / iStock / Getty Images Plus

Near a busy road in Britain’s Cotswolds, Sally and Neville Hollingworth, a couple who spends part of their time hunting fossils, made an extraordinary find: The skeletons of five prehistoric mammoths that are about 220,000 years old.

The mammoths are in a remarkable state of preservation, with Neanderthal tools — including an axe — and the remains of elk, beetles and snails nearby. Some of the pollen and plant fossils found at the site are extinct.

Once the enormity of the discovery was realized, DigVentures, a team of archeologists who lead crowdfunded archeological excavations, were called in to dig the site.

“Exciting doesn’t cover it,” Lisa Westcott Wilkins of DigVentures told The Observer, as The Guardian reported. “Other mammoths have been found in the UK but not in this state of preservation. They’re in near-pristine condition. You can’t take it in.”

“Archaeological sites from this period are rare, and critical for understanding Neanderthal behaviour across Britain and Europe. Why did so many mammoths die here? Could Neanderthals have killed them? What can they tell us about life in ice-age Britain? The range of evidence at this site gives us a unique chance to address these questions,” Wilkins added.

The mammoth fossils are thought to be from a time when the region was between two glacial periods and experiencing mild weather. Neanderthals traveled south to the area seeking warmer temperatures, The Guardian reported.

The type of extinct prehistoric elephant discovered by the Nevilles, the Steppe mammoth, is the largest of its species, and originated in Africa around five million years earlier. This type of mammoth weighed two or three times as much as an African elephant. Not much is known about how the Neanderthals existed in ice-age Britain, but clues are hoped to be gained from the well-preserved site.

“We have evidence of what the landscape was like. We know what plants were growing there. The little things are really revealing the context of these big, iconic giants. It’s a glimpse back in time. That’s incredibly important in terms of us understanding how climate change especially impacts environments, ecosystems and species,” Ben Garrod, an evolutionary biologist and professor at the University of East Anglia, told The Observer, The Guardian reported. Garrod will join Sir David Attenborough and archeologists from DigVentures in a BBC One documentary, Attenborough and the Mammoth Graveyard, airing on December 30.

Garrod hypothesized that the Neanderthals could have made camp at the site and may have actually chased the mammoths into the mud, or perhaps just happened upon them. “Maybe they found them there already and got a free meal,” he said to the Telegraph, as reported by the Daily Mail.

Garrod told The Observer that finding such intact skeletons is a rare find in England, The Guardian reported. DigVentures, who raised funds for the digging, analysis and research of the artifacts, hopes to raise more funds for further excavations at the site. Natural flooding is currently keeping the site safe from fossil hunters.

“This is one of the most important discoveries in British palaeontology,” Garrod told The Observer, as reported by the Swindon Advertiser.