Why is Palm Oil So Bad? 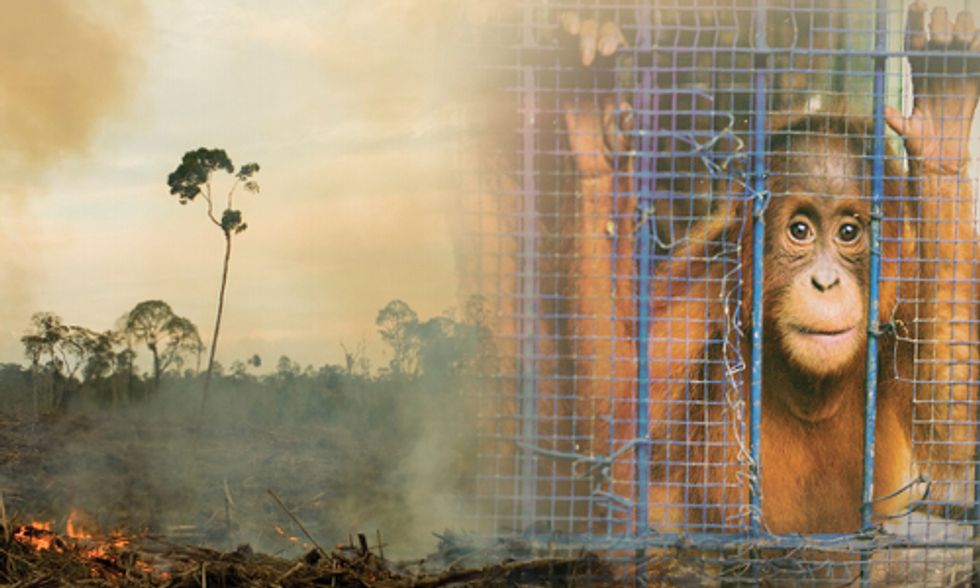 Consumer knowledge on the destructiveness of palm oil production—found in everything from ice cream and crackers to detergents and cosmetics, is rising. Increased awareness is sorely needed, as more and more forests are cleared to make way for palm oil plantations.

Palm oil is among the biggest threats driving iconic wildlife species like the Sumatran orangutan to the brink of extinction in Indonesia. Photo credit: Rainforest Action Network

There are a lot of questions around the use of palm oil. The Rainforest Action Network, which has been working on this issue for some time, has an excellent factsheet on palm oil, which is briefly excerpted here:

What is Palm Oil?

Palm oil is a globally traded agricultural commodity that touches our lives in every trip we make to the supermarket. Palm oil is an edible vegetable oil derived from pulping the fruit of oil palms originally native to Africa. Palm oil is commonly used as a cooking oil in Africa, Southeast Asia and parts of Brazil and its consumption is on the rise worldwide. The recent rise in the use of palm oil in the U.S. food industry has resulted largely from changed labeling requirements that have caused a switch away from using trans fats.

Why is Palm Oil a Problem?

Palm oil has become one of the world’s leading causes of rainforest destruction. Unchecked expansion has pushed palm oil plantations into the heart of some of the world’s most culturally and biologically diverse ecosystems and palm oil is among the biggest threats driving iconic wildlife species like the Sumatran orangutan to the brink of extinction in Indonesia. This large-scale destruction of rainforests and carbon-rich peatland landscapes is releasing globally significant quantities of carbon pollution into the atmosphere, making palm oil a major global driver of human induced climate change. The production of palm oil is also responsible for widespread human rights violations as palm oil companies often forcefully remove Indigenous Peoples and rural communities from their lands.

The rainforests of Indonesia are among the most biodiverse on the planet, containing 10 percent of the world’s known plants, 12 percent of mammals, and 17 percent of all known bird species. The threat from deforestation is huge, as only half of the country’s original forests remain, with an estimated 2 million acres lost every year.

Rudi Putra, a biologist who has been dismantling illegal palm oil plantations that are causing massive deforestation and threatening to wipe out the Sumatran rhino, orangutans, tigers, elephants and other endangered species, just won the prestigious Goldman Environmental Prize for his efforts. He is protecting the Leuser Ecosystem in Aceh; it is the only place on Earth where tigers, elephants, rhinos and orangutans can be found living together in the wild.

Working with local communities and local police, Putra and his colleagues were able to enforce land protection laws and shut down illegal palm oil plantations. Watch this short video on Rudi Putra’s story:

Despite this success, the local government in Aceh is now trying to legally open up more land to palm oil development.

Ultimately it is up to consumers to know what is in what they eat. As with sweatshop labor, there is a high price to pay for our modern goods. Urging companies to cut palm oil out of their supply chains is one solution. And supporting the Rudi Putra’s of the world is another —which comes down to awareness of what is happening around the world, in our own communities and within our own families. There are fewer than 100 Sumatran rhinos left in the wild. Is it worth wiping them out for a processed food ingredient?

Sign the petition to protect the Leuser Ecosystem as a UNESCO World Heritage Site. And call on snack food companies such as General Mills and Nestle to only use sustainably sourced palm oil.