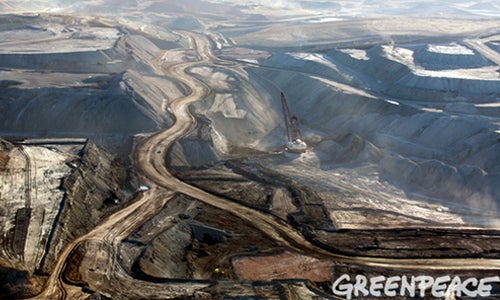 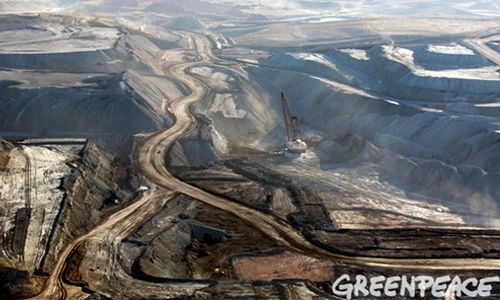 Coal Mine Activities In The Wyoming Powder River Basin

Activities at the Black Thunder Mine outside of Wright, WY. Photo credit: Greenpeace USA

By keeping their money in coal and oil companies, investors are betting a vast amount of wealth, including the pensions and savings of millions of people, on high future demand for dirty fuels. The investment has enabled fossil fuel companies to massively raise their spending on expanding extractable reserves, with oil and gas companies alone (state-owned ones included) spending the combined GDP of Netherlands and Belgium a year, in belief that there will be demand for ever more dirty fuel.

This assumption is being challenged by recent developments, which is good news for climate but bad news for anyone who thought investing in fossil fuel industries was a safe bet. Frantic growth in coal consumption seems to be coming to an end much sooner than predicted just a few years ago, with China’s aggressive clean air policies, rapidly dropping coal consumption in the U.S. and upcoming closures of many coal plants in Europe. At the same time the oil industry is also facing slowing demand growth and the financial and share performance of oil majors is disappointing for shareholders.

Nevertheless, even faced with weakening demand prospects, outdated investment patterns are driving fossil fuel companies to waste trillions of dollars in developing reserves and infrastructure that will be stranded as the world moves beyond 20th century energy.

A good example is coal export developments. The large recent investment in coal export capacity in all key exporter countries was based on the assumption of unlimited growth of Chinese demand. When public outrage over air pollution reached a new level in 2012-2013, the Chinese leadership moved swiftly to mandate absolute reductions in coal consumption, and banned new coal-fired power plants in key economic regions. A growing chorus of financial analysts is now projecting a peak in Chinese coal demand in the near future, which seemed unimaginable just a couple of years ago. This new reality has already reduced market capitalization of export focused coal companies. Even in China itself, investment in coal-fired power plants has now outpaced demand growth, leading to drops in capacity utilization.

Another example of potentially stranded assets is found in Europe, where large utilities ignored the writing on the wall about EU moves to price carbon and boost renewable energy. Betting on old business models and the fossil-fuel generation, they built a massive 80 gigawatts of new fossil power generation capacity in the last 10 years, much of which is already generating losses and now risk becoming stranded assets.

Arctic oil drilling is possibly the ultimate example of fossil companies’ unfounded confidence in high future demand. Any significant production and revenue is unlikely until 2030, and in the meanwhile Arctic drilling faces high and uncertain costs, extremely demanding and risky operations, as well as the prospect of heavy regulation and liabilities when (not if) the first major blowout happens in the region. No wonder the International Energy Agency is skeptical about Arctic oil, assuming hardly any production in the next 20 years. Regardless, Shell has already burnt $5 billion of shareholders’ money on their Arctic gamble.

Those investing in coal and oil have perhaps felt secure seeing the global climate negotiations proceed at a disappointing pace. However, the initial carbon crunch is being delivered by increasingly market-driven renewable energy development, and by national level clean energy and energy efficiency policies—such as renewable energy support schemes and emission regulation in Europe, or clean air policies in the U.S. and in China. Global coal demand, and possibly even oil demand, could peak even before a strong climate treaty is agreed.

Improving competitiveness of renewable energy, growing opposition to destructive fossil fuel projects, concerns on water shortage and the imperative of cutting global CO2 emissions all point in the same direction: Governments, companies and investors should all be planning for a world with declining fossil fuel consumption—not only because it’s the right thing to do, but also because it makes economic sense.  It is the direction the world will be moving to—faster than many yet anticipate.