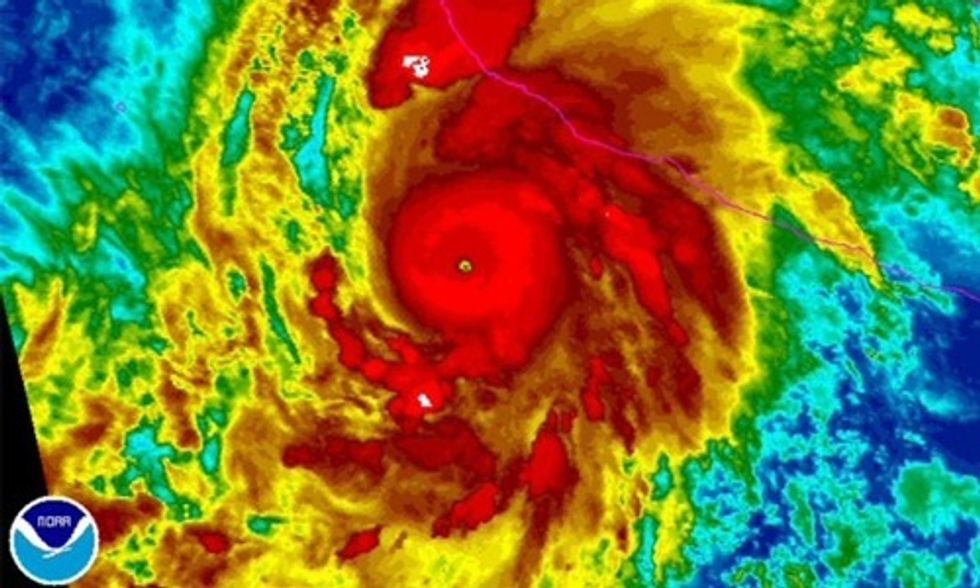 Hurricane Patricia—the most intense hurricane ever recorded in the Western Hemisphere—was downgraded to a tropical depression with 35-mph sustained winds on Saturday, and offered to some observers a reminder of the consequences of a warming planet.

No fatalities from the historic storm, which forced the evacuation of some 50,000 people, have yet been reported, and initial reporting indicates no major devastation, damages from potential heavy winds, rains and landslides are still unfolding as the storm makes its way inland.

By Saturday morning Patricia had been downgraded to a Category 2. The National Hurricane Center reports, "On the forecast track, the center of Patricia will move across central and northeastern Mexico today and tonight."

The hurricane spared the densely populated centers of Puerto Vallarta and Manzanillo; it appears to have done the most damage to small villages between the two cities. For many in these impoverished communities, it could take much time to recover from even moderate damage.

The Weather Channel notes that flooding and mudslides remain potentially deadly threats, and adds: "El Universal reported that multiple homes were severely damaged and banana and papaya crops were destroyed in Michoacan state. Mud and landslides closed several roads in the region. Some homes in Cuyultan, Colima, were flooded."

Before making landfall Friday evening along Mexico's Pacific coast with sustained winds of 165 mph, the then-Category 5 storm was packing winds of 200 mph. "These are the highest reliably-measured surface winds on record for a tropical cyclone, anywhere on the Earth," meteorologist Jeff Masters wrote.

Masters and fellow meteorologist Bob Henson described Patricia as "stunning, historic, mind-boggling, and catastrophic." They add that it's "the fastest-intensifying hurricane ever observed in the Western Hemisphere," and that Patricia's "200 mph sustained winds make it the 3rd strongest tropical cyclone in world history."

"How did Patricia get to be so strong?" meteorologist Eric Holthaus asks at Slate.

The answer, quite simply, involves human-caused climate change. Hurricane Patricia is exactly the kind of terrifying storm we can expect to see more frequently in the decades to come. Although there’s no way to know exactly how much climate change is a factor in Patricia’s explosive strengthening, it’s irresponsible, at this point, not to discuss it.

The Washington Post also notes that "record-setting hurricanes are consistent with predictions by climate researchers about the consequences of a warming world."

The oceans heating up because of climate change will have consequences, said Michael Mann, a climate researcher at Penn State University. "Hurricane Patricia, and her unprecedented 200 mile-per-hour sustained winds, appears to be one of them now, unfortunately."

Such consequences were undeniable to Mexico's climate negotiator at the Bonn, Germany climate talks, which concluded Friday and where delegates sought to hammer out a draft climate treaty ahead of the upcoming COP21 talks in Paris.

Reportedly holding back tears, Roberto Dondisch urged the other delegates to reach consensus on a deal.

"In about four hours, Hurricane Patricia will hit the Mexican coast," Dondisch said. "I don't think I need to say more about the urgency to get this deal done."

"The deplorable inaction at the climate negotiations is a calamity for people across the world," said Dipti Bhatnagar, Friends of the Earth International's climate justice and energy coordinator. "We are facing a planetary emergency with floods, storms, droughts and rising seas causing devastation. The risk of irreversible climate change draws ever closer, and hundreds of thousands of people have already paid with their lives."