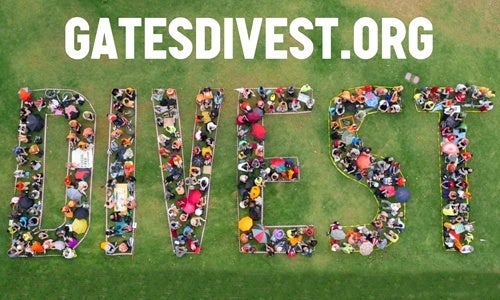 Beginning in March 2015, The Guardian, one of the world’s most respected and influential news organizations, launched an unprecedented media advocacy campaign—it was asking the richest and largest foundation on Earth, the Bill & Melinda Gates Foundation, to remove their investments in the fossil fuel industry. With the help of divestment activists, the Guardian collected the voices of a quarter of a million people across the globe who called on the Gates Foundation to join hundreds of other foundations, institutions, pensions, churches and communities representing trillions of dollars of investments who had taken their investments out of the fossil fuel industry since the fossil fuel divestment movement began just over 3 years ago.

Gates responded by giving a rather dismissive response to divestment, so former Seattle Mayor Mike McGinn, 350 Seattle, Divest University of Washington and numerous other partners, including leaders of the Black Lives Matter movement, launched a local Seattle-based divestment campaign in the hometown of the Gates Foundation. After volunteers delivered a 40-page rebuttal of Gates’ rejection of divestment and then persistently campaigned outside the Gates Foundation every day for over a month, Gates addressed divestment again in an interview with the Atlantic.

Gates’ response was once again disappointing—creating straw men out of the divestment movement in order to knock them down, and downplaying the remarkable prospects for a clean energy revolution. As a result, instead of aligning his investments with a clean energy future, Gates is continuing to support the very industries who are lobbying against progress on clean energy and whose business models are deeply out of line with averting the climate crisis. Perhaps not surprisingly, Exxon endorsed the billionaire’s view as part of their attempt to cover up their role in spreading misinformation and holding back climate progress for which they may be held legally liable under the Racketeer Influenced and Corrupt Organizations Act. It seems Gates is in good company …

To Gates’ credit he got the equation partly right, when he said that “the solution is investment”—a statement he backed up by committing to double his investments in clean energy to $2 billion. However, clean energy investments are only part of the equation: we also need to wind down investments in the fossil fuel industry while breaking the fossil fuel industry’s corrupting stranglehold on politics so that we can unlock the sorts of policies, societal changes and investments needed to tackle the climate crisis. Divestment is a powerful tool in unlocking the latter half of that equation.

Of course, Gates rightfully points out that divestment alone will not solve climate change, but he creates a straw man by suggesting that anyone is advocating for divestment alone as a solution. Such all-or-nothing dichotomization is rhetorically misleading as divestment campaigners are well aware that divestment is just one tool among many needed to help push the envelope on climate action. (For instance, here in Seattle, myself and other divestment advocates are building on the social and political will created by the divestment movement to bring a carbon tax to Washington—one of Gates’ favored climate solutions, perhaps he’d care to join us?)

https://twitter.com/ClimateStore/status/642427867129901056 ultimately increases the cost of capital to companies and limits the ability to finance expensive projects, which is particularly damaging in a sector where projects are inherently long term.”