Is Whole Foods Telling Us the Truth About Its Stance on Animal Rights? 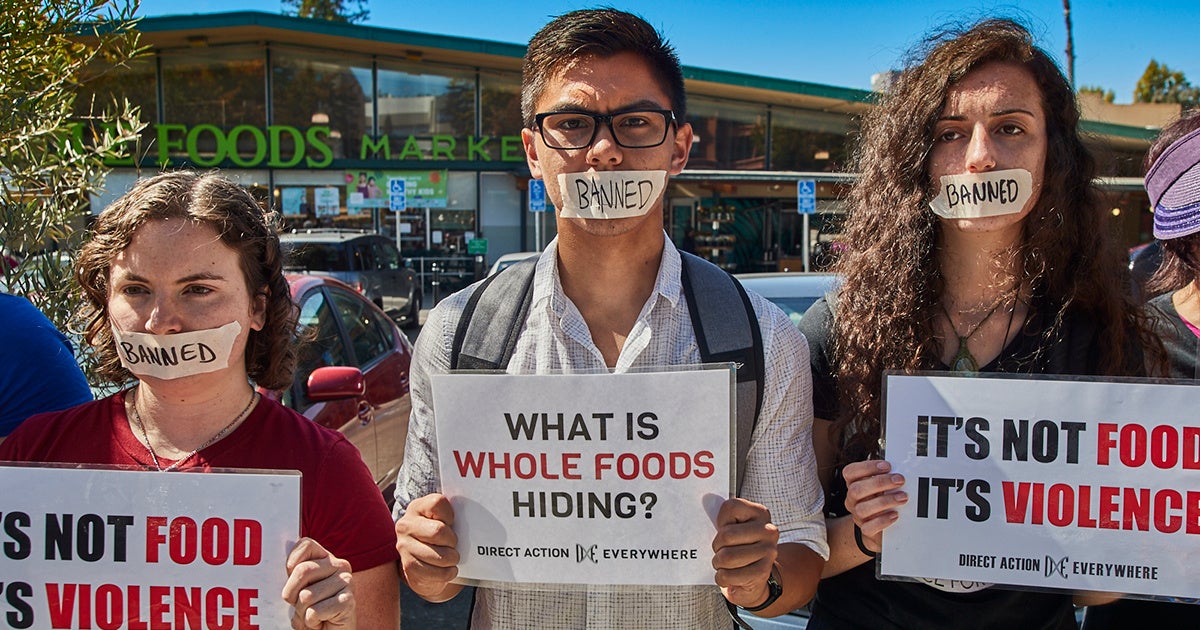 In February of this year, I was one of around 100 members of the grassroots animal rights network Direct Action Everywhere (DxE) who walked into a Whole Foods store on Telegraph Avenue in Berkeley, California. Several of the activists rolled a small wooden calf hutch with a young woman inside into the store. The hutch was four feet wide, six feet long and four feet high, the size used by dairy farms DxE visited; dozens of milk cartons were placed in front of the hutch. All of this was meant to dramatize the violence and cruelty inherent in raising cows and taking their milk for human consumption.

The protest was one of numerous nonviolent actions, both inside Whole Foods stores and outside in their parking lots, that have been held during the past four years. Until recently, Whole Foods employees, managers and security, at least in the Bay Area where I live, let them happen. DxE activists have never been arrested at Bay Area Whole Foods protests, which have also included holding a mock Thanksgiving dinner in the meat department with a live human in place of a roasted turkey. 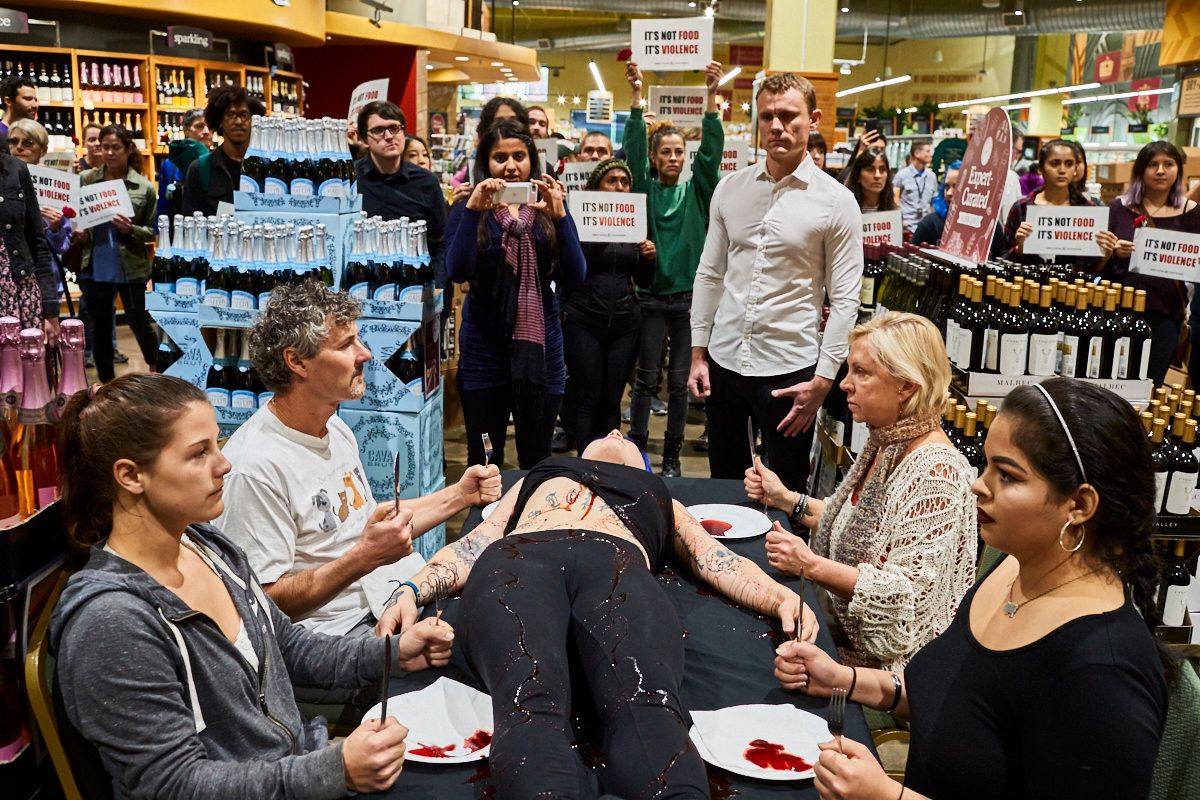 But toward the end of September 2018, Whole Foods (which was purchased by Amazon in 2017) changed its tactics. Whole Foods Market California decided to sue DxE, asking for a prohibitory injunction to prevent activists from protesting on Whole Foods property throughout California, including inside stores and outside in the parking lots.

DxE targets Whole Foods because the grocery chain misleads the public. For years now, Whole Foods has marketed itself as selling meat and animal products that come from animals that are humanely raised. DxE has conducted numerous investigations of farms that supply Whole Foods such as Diestel Turkey Ranch and Petaluma Farms, and the investigative teams have found and documented, in photographs and on video, a wide range of atrocities, including, depending on the farm investigated, dead birds among the living, birds trapped in their own feces, birds crammed together in barns, birds that live their entire short lives inside barns, untreated wounds and/or cannibalisms. 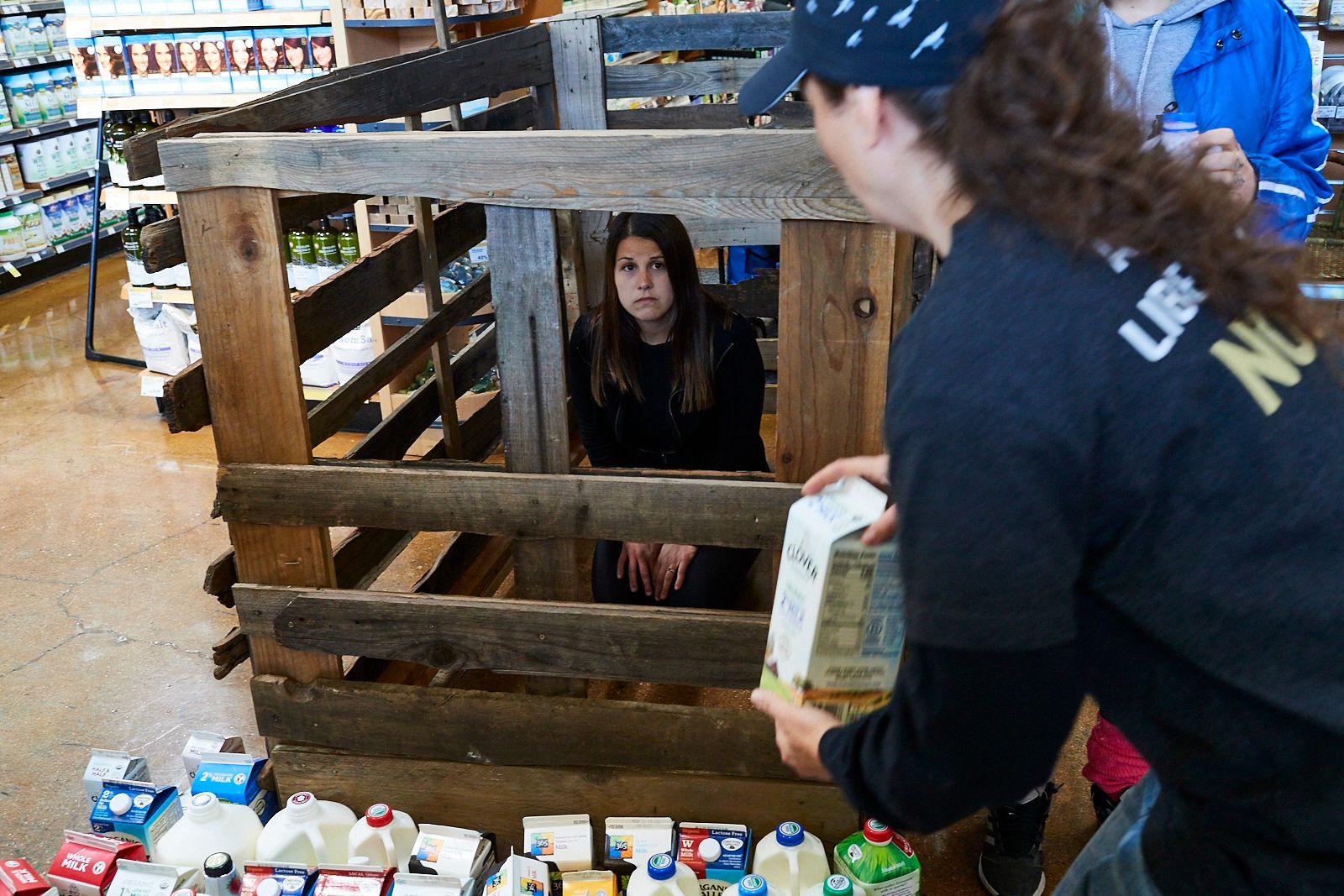 DxE activist inside calf crate as other activists place containers of milk in front of crate on Feb. 24 at a Whole Foods store on Telegraph Avenue in Berkeley, California.Michael Goldberg

Animal rights activist have a name for Whole Foods’ hypocrisy: the “humane lie.”

DxE says the very notion that it’s okay to kill an animal as long as you raise the animal in a decent manner is wrong. As DxE points out again and again in chants and speak-outs, and as anyone who cares for a dog or cat knows, “Animals want to live, just like us.”

The odd thing about Whole Foods filing a lawsuit against DxE is that for most of the past four years, there appeared to be an understanding on the part of Whole Foods managers and employees that they were to let DxE activists come into their stores, protest and leave, without trying to stop them or have them arrested. On one occasion, a friendly store employee even pointed out to me that I was holding my protest sign upside down.

What signaled a real change on the part of Whole Foods was the 11th-hour legal request for an injunction to ban Wayne Hsiung, co-founder of DxE, and other DxE activists from all California Whole Foods stores. The ostensible reason: DxE had announced a week-long protest called “Occupy Whole Foods,” planned for the Telegraph Avenue store and set to start on September 23 of this year.

In court on the Friday before Occupy Whole Foods was to begin, a judge said that banning DxE from Whole Foods stores throughout California was out of the question, but she did grant a temporary restraining order prohibiting Hsiung and other DxE members from stepping onto the company’s Telegraph Avenue property.

The reason for the restraining order was an Occupy Whole Foods Facebook event page the judge said indicated DxE activists were planning to occupy the store despite the fact that DxE’s lawyer Dan Siegel stated that the activists were not using the word “occupy” in a literal manner but rather, in the symbolic spirit of the “Occupy Wall Street” protests that took place all over the country, and that DxE members were actually going to protest on the sidewalk bordering Whole Foods property, and not in the store or parking lot.

The judge also said that another judge would hear the Whole Foods vs. DxE case at a future date and would then decide if a permanent ban from all stores in California and/or the Telegraph store was warranted.

Surprisingly, though Whole Foods managers began asking DxE not to enter at least one of their stores in early 2018, Bay Area stores where DxE continued to hold protests had apparently no problem with activists protesting on Whole Foods property, outside the front entrances of the stores.

On April 28 in Berkeley, a store manager directed dozens of activists to leave the Telegraph store but said, “You guys are more than welcome to protest outside.” That protest, held on Whole Foods property right in front of the store, took place with no interference from security or police. On July 29 of this year, more than 100 DxE activists marched from Petaluma Farms, a Whole Foods egg supplier, to the Petaluma Whole Foods and stood outside the store in the parking lot doing speak-outs about the animal cruelty involved in egg production, and chanting animal rights slogans such as “It’s not food, it’s violence.” Both Whole Foods management and Petaluma police (who followed the protesters from the farm to the store) stood by; no one was arrested.

DxE believes the recent legal challenge is Whole Foods’ attempt to stifle free speech and prevent DxE from engaging in the public good of alerting Whole Foods customers that Whole Foods’ multimillion-dollar, multi-year humanely raised marketing campaign is a lie. DxE also argues that activists have the right to protest inside Whole Foods because the stores are public forums. After all, Whole Foods invites people to hang out in areas of their stores where they provide tables and seating, and where people sometimes spend much of the day working on their laptops (electrical outlets provided), talking to friends and engaging in other social activities.

In mid-November, during an animal rights conference held in Salt Lake City, hundreds of activists filled a local Whole Foods store and protested the company for animal cruelty and consumer fraud while police and store employees looked on; no one was arrested or detained.

In addition to the Whole Foods suit, DxE has, since early 2018, been under fire from authorities in multiple states. Hsiung himself has been charged with numerous felonies in Utah, North Carolina, Colorado and most recently, Sonoma Country, California, for rescuing sick or injured animals from farms, or, in one case, for simply entering a Whole Foods store in Colorado and asking a store manager about the animal products sold at the store. (In early December, the Colorado charges against Hsiung were dismissed.)

These prosecutions are being coordinated across the country by authorities pressured by or beholden to Big Ag in the hopes of shutting down DxE. In advance of a conference DxE held in Salt Lake City in November, the Utah Farm Bureau alerted its members that “the militant animal activist organization, Direct Action Everywhere” would be coming to Salt Lake City and that “ANY farm, ranch or operation may be targeted.” (It should be noted that DxE is not a “militant” group and that nonviolence is a core value of DxE. Co-founder and former Northwestern law professor Hsiung is a student of both Gandhi and Martin Luther King Jr.; DxE holds a number of nonviolence training workshops throughout the year.)

In advance of a planned December DxE protest, California’s leading dairy industry group, the Modesto-based Western United Dairymen, wrote about DxE in a recent newsletter, “As the domestic terrorist threat of animal rights activists continue to increase throughout the state, it’s important to make you aware that multiple county sheriff’s departments have begun to adopt a Zero Tolerance Policy for these triggered terrorists.”

Whether or not Whole Foods succeeds in getting DxE banned from its stores in California (a judge is due to rule any day now), the activist group intends to keep protesting Whole Foods’ humane lie, and has also been protesting Amazon directly (including the creation of oneclickcruelty.com, a website that explains why DxE protests the mega online retailer), and will continue investigating so-called humane farms in order to inform the public as to where the animal products sold at Whole Foods and elsewhere come from—and how those animals were raised.

Michael Goldberg is a lead researcher on the Direct Action Everywhere (DxE) investigatory team and was an investigative reporter and senior writer at Rolling Stone for 10 years. He has contributed to Wired, Esquire, Details, The Daily Pitchfork and other publications. His third novel, Untitled, was published in August 2017. He is also a photojournalist and has been documenting DxE for more than two years.