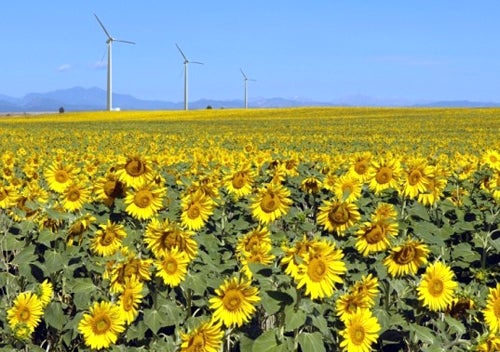 Renewable “green” energy will be the biggest industry in the history of humankind. Jay Warmke’s When the Biomass Hits the Wind Turbine is a great way to learn all about it.

Jay is blessed with an off-beat sense of humor and a wonderful way of narrating truly earth-shattering history with aplomb and a light, loving touch. “I don’t remember a time when the world wasn’t about to end,” he begins.

But given this summer’s life-threatening heat, its record drought and on-going string of apocalyptic ecological disasters, we could be easily convinced that unless we do something—NOW!—our ability to live on this earth could indeed come to a crashing halt. 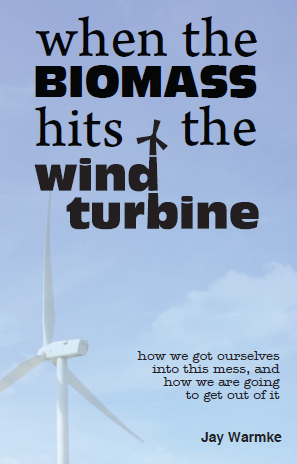 With his wife and collaborator, Annie, Jay has founded an ecological community called Blue Rock Station, near Zanesville, Ohio. It features green power along with tours and classes designed to further our knowledge and commitment to a world worth saving.

His book opens with some obligatory personal history from a guy who grew up when “the price of fossil fuels is way too cheap.”

To explain why, Jay backs us up to 1491, the year before native Americans discovered Christopher Columbus on their beach. We learn about charcoal, peat and the reason the Mayans dropped from a population of 14 million all the way down to 30,000 (hint: it had to do with energy and trees).

We learn that Pope Celestine 3 believed that since wind came from God, His church had the right to issue (or deny) permits for windmills. Warmke says as many as 4,000 operated in England when William the Conqueror took a census in 1086. The number jumped to more than 10,000 a century later.

None of them were used to generate electricity, discovered by Ben Franklin not with a kite (he would’ve been fatally electrocuted) but with a parlor game device that generated shocks just for the fun of it. It was Franklin who invented the term “battery” when he hooked up Leyden jars in sequence and used the system to zap a chicken. Ben later reported that the electrocuted meat was “uncommonly tender.”

But for all the fun history—and there’s a lot of it in this book—the most interesting time is the present. As Warmke points out, the era of the photovoltaic (PV) cell is rapidly accelerating. “The installed base of PV within the U.S. has more than doubled,” he says. Since 1980 the price of PV modules has dropped from more than $20/watt to well under $5. As General Electric and others have confirmed, the price of solar-generated electricity—long dismissed as being far too high to be practical—is about to drop below installed new coal generators.

Which means, simply put, that even if you’re a 1 percent billionaire who hates hippies and the planet, you’re still going to invest in solar over nuclear, coal or oil.

In fact, says Warmke, in the face of the Solartopian revolution, the whole fossil/nuclear business is nothing but smoke and mirrors. “For the foreseeable future,” he writes,”the battle for newly installed electric power will be between natural gas, wind and solar.”

But the horrifically destructive fracking process by which natural gas is being mined is ecologically and economically unsustainable. Aside from destroying our water and bringing on earthquakes, Jay writes, fracking simply does not pay. It’s heavily subsidized, barely covers investment if at all, and will not last. Ditto tar sands, the Keystone Pipeline and all the other insanely expensive eco-ripoffs being perpetrated by the corporate elite.

Instead, says Warmke, we’re now in the midst of the greatest technological revolution in history, and its color green stands for both the planet and profit. As knowledge and mastery of PV improves, every building, every machine, every vehicle will be covered with it.

Like wind power, biofuels and nearly all other green energy technologies, PV power stations nearly always come on line ahead of schedule and under budget. And they are always “misunderestimated.” According to the Renewable Energy Policy Network for the 21st Century, projections for how far and fast green energy would spread have been consistently low-balled. And not by a little. In many cases the predictions for the spread of renewable energy have been off by a factor of ten and more, in terms of energy produced, dollars invested and viability of market price.

To help prove the point Warmke provides a fascinating history of the electric car. It was, after all, the original plan of Thomas Edison and Henry Ford to have a global auto industry based on batteries. As you ran out of charge, you simply drove into a station and traded out your limp battery for a freshly charged one.

But back then the power of the oil cartels was stronger than the magnetism of an electric vehicle. Rockefeller’s petroleum—which had been used primarily to produce kerosene for lighting—suddenly became the basis for a new fuel called gasoline (airplanes still fly on a variation of the original kerosene).

Way too late, we are finding our way out of the fossil fuel dead end. Worldwide hybrid sales have jumped from virtually zero in 1997 to nearly 700,000 just 13 years later.

And as solar/wind-driven electricity skyrockets in popularity, the electric car has returned. It has come most importantly in the form of the hybrid, especially Toyota’s Prius. Initially dismissed by bloviating “experts,” the gas/electric combo is delivering 60 mpg and more in commercially available automobiles that look a hell of a lot like “regular” gas-driven planet killers.

In his brilliant chapter on “The Rebirth of the Electric Car,” Warmke predicts that within 30 years half of all passenger cars will be electric or hybrid (if green patterns hold true, it will come a lot sooner). The most serious problem today, Jay says, may be that battery technology currently limits the range of an electric vehicle to 100 miles or less on a single charge.

But most people don’t drive anywhere near that many miles every day. An automobile is usually on the road an hour a day or less. The batteries are rapidly improving. And “electric filling stations” are starting to proliferate. The heavily traveled Route 5 Corridor through Washington, Oregon and California is about to host the West Coast Electric Highway, with charging stations every 40-60 miles along the way. With the speed and power of the charge improving daily, 2 million or more electric cars may travel Route 5 alone.

But what makes green energy so exciting in general is its astonishing adaptability. According to Warmke, a new breakthrough now involves “the invention of a process whereby photovoltaic panels can actually be produced in a manner very similar to printing.”

And, he says, “by printing the photovoltaic energy source directly on the surface of nearly any suitable product (be it paper or cloth or plastic), the only added cost will be in the production, not in the material.”

As that happens, electrical generation will be everywhere. Politically, it will undercut the power of the energy corporations in particular, and all corporations in general. Distributed generation, as it’s often called, will mean everyone can generate and use their own industrial energy, regardless of what the corporate 1 percent has to say or wants to charge.

Overall, Jay Warmke’s often funny, always compelling excursion to Solartopia makes it clear that when it comes to green power, “opportunities abound that will make the Industrial Revolution look like a second-rate warm-up act for the real show.”

And the real show is a green-powered economy that is sustainable, inexpensive and provides jobs for all those who want them.

As Warmke concludes: “One thing is certain. It’s sure going to be exciting.”

As is his book. Take it, read it and enjoy. Then go out and work. Shut a nuke. Stop a coal-burner. End fracking.

I’m sure if you visit Jay and Annie at Blue Rock Station, they’ll have some suggestions. And that they’ll be every bit as fun, provocative and productive as this excellent book.

Harvey Wasserman’s Solartopia Green Power & Wellness Show is at www.progressiveradionetwork.com, and he edits www.nukefree.org. Harvey Wasserman’s History of the U.S. and Solartopia! Our Green-Powered Earth are at www.harveywasserman.com along with Passions of the PotSmoking Patriots by “Thomas Paine.” He and Bob Fitrakis have co-authored four books on election protection, including How the GOP Stole America’s 2004 Election, at www.freepress.org.