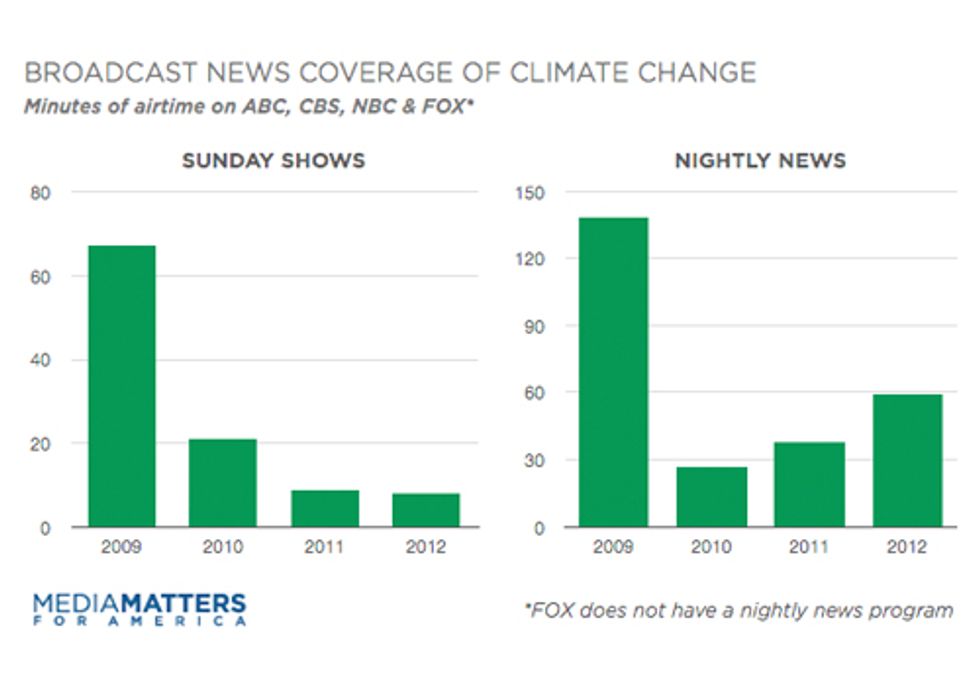 Even In Record-Breaking Year, Broadcast Climate Coverage Remained Minimal. In 2012, the U.S. experienced record-breaking heat, a historic drought, massive wildfires in the West, and Hurricane Sandy. Meanwhile, Arctic sea ice extent shattered the previous record low and the Greenland ice sheet saw the greatest melt in recorded history. According to the National Climatic Data Center, 2012 was the warmest year in recorded history for the contiguous U.S. Yet despite these illustrations of climate change, the broadcast news outlets devoted very little time to climate change in 2012, following a downward trend since 2009:

Sunday Show Coverage Continued To Decline. Since 2009, climate coverage on the Sunday shows has declined every year. In 2012, the Sunday shows spent less than 8 minutes on climate change, down from 9 minutes in 2011, 21 minutes in 2010, and over an hour in 2009. The vast majority of coverage—89 percent—was driven by politics, and none was driven by scientific findings.

Nightly News Coverage Increased Slightly From 2011, Driven By Extreme Weather. The nightly news shows devoted just under an hour to climate change in 2012, up from 38 minutes in 2011 but significantly less than in 2009. Coverage was largely driven—69 percent—by the extreme weather the U.S. experienced this year; 17 percent of coverage was driven by scientific findings and 12 percent was driven by political stories related to climate change.

Sunday Shows Quoted No Democratic Politicians On Climate Change. In 2012, the Sunday shows did not quote a single Democratic politician on climate change. Most of the politicians quoted were Republican presidential candidates, including Rick Santorum, who went unchallenged when he called global warming "junk science" on ABC's This Week. More than half of climate mentions on the Sunday shows were Republicans criticizing those who support efforts to address climate change. This imbalance was also present, though less dramatic, on the nightly news programs, which quoted 60 percent Republicans and 40 percent Democrats on climate change.

In Four Years, Sunday Shows Have Not Quoted A Single Scientist On Climate Change. Of those who were asked about climate change on the Sunday shows, 54 percent were media figures, 31 percent were politicians and not one was a scientist or climate expert. This is consistent with a previous Media Matters analysis which found that none of the Sunday shows quoted any scientists on climate change between 2009 and 2011. By contrast, two-thirds of those interviewed or quoted on the nightly news programs in 2012 were scientists. [Media Matters, 4/16/12]

Sunday Shows Obscured Scientific Consensus On Climate Change. Not only did the Sunday shows shut out those who accept the science of climate change, but they also failed to inform their audiences that the vast majority of climate scientists agree that climate change is occurring and is driven by human activity. Only 11 percent of coverage implied that scientists agree on global warming, while 44 percent failed to correct a guest who questioned the science. By contrast, 60 percent of nightly news coverage alluded to the scientific consensus.

This report analyzes coverage of "climate change" or "global warming" between Jan. 1, 2012 and Dec. 31, 2012 on four Sunday morning talk shows (ABC's This Week, CBS' Face the Nation, NBC's Meet the Press, and Fox Broadcasting Co.'s Fox News Sunday) and three nightly news programs (ABC World News, CBS Evening News, and NBC Nightly News). Fox Broadcasting Co. airs Fox News Sunday, but does not air a nightly news equivalent; Fox News is a separate cable channel. Our analysis includes any segment devoted to climate change, as well as any substantial mention (more than one paragraph of a news transcript and/or or a definitive statement about climate change). Timestamps were acquired from Media Matters' internal video archive and were applied generously. For instance, if a segment about an extreme weather event mentioned climate change briefly, the entire segment was counted as climate coverage.

The following chart displays the coverage included in our study: