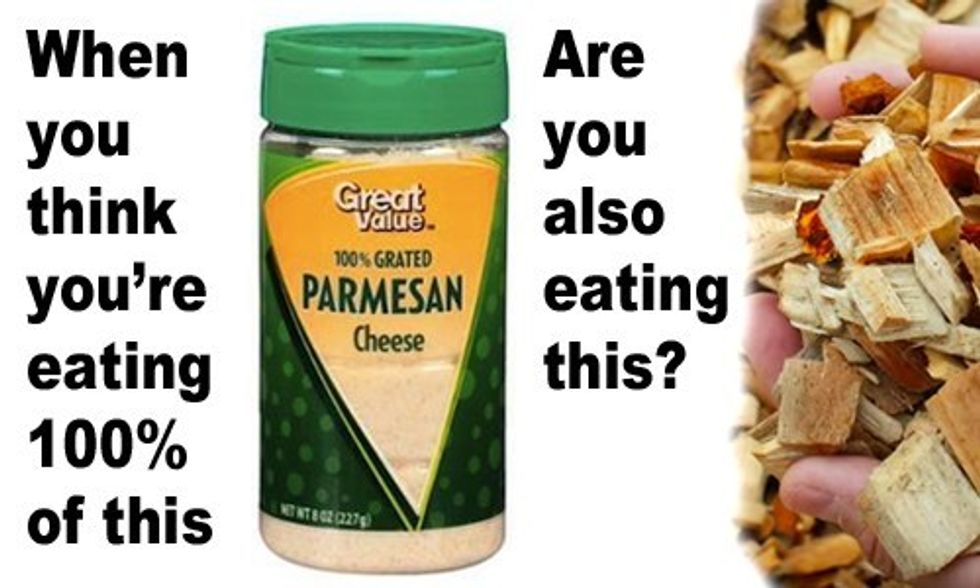 Wal-Mart's "Great Value 100% Grated Parmesan Cheese" is at the center of new litigation that accuses the brand of, well, not being 100 percent cheese.

Tests shows that the big box retailer's cheese contained as much as 10 percent cellulose, a wood-based additive that prevents clumping in pre-shredded cheese according to a complaint filed yesterday in Manhattan federal court, Bloomberg reported.

A negative review of Wal-Mart's Great Value brand of "100 percent" grated parmesan cheese was posted on February 21 following reports of wood pulp filler. The product, which has an average of 4.5 stars out of 81 reviews, had been generally received well by consumers until news broke about the filler. Photo credit: Walmart

The lawsuit—Moschetta v. Wal-Mart Stores Inc.—was filed at the U.S. District Court, Southern District of New York on behalf of customer Marc Moschetta. He claims that the 100 percent representation of the Wal-Mart's cheese "was false and mis-characterized the amount and percentage of Parmesan cheese in the container.”

Cellulose has been called "wood pulp" because it is extracted from ground-up wood. The additive is OK'd by the U.S. Food and Drug Administration (FDA) for consumption and is actually pretty standard in many shredded cheese varieties and other foodstuffs such as ice cream, puffed snack foods, baked goods and more.

What's not OK is using too much of it. The FDA considers safe cellulose consumption levels at 2-4 percent. According to a Bloomberg investigation, Wal-Mart and other brands have ironically added high quantities of cellulose to their misleadingly labeled 100 percent Parmesan products:

So why are these cheesemakers stuffing their Parmesan products with plant fiber? According to Bloomberg:

Of all the popular cheeses in the U.S., the hard Italian varieties are the most likely to have fillers because of their expense. Parmesan wheels sit in curing rooms for months, losing moisture, which results in a smaller yield than other cheeses offer. While 100 pounds of milk might produce 10 pounds of cheddar, it makes only eight pounds of Parmesan.

Bloomberg reported that Moschetta is seeking class-action status for the fraud claims to allow U.S. consumers to band together to press claims against Wal-Mart.

“We take this matter seriously,” Randy Hargrove, a spokesman for Bentonville, Arkansas-based Wal-Mart, told Bloomberg via email. “We will review the allegations once we have received the complaint and will respond appropriately with the court.”

Incidentally, the FDA has been cracking down on companies cutting corners with their Parmesan cheese products. Following a tip, the agency busted Pennsylvania-based Castle Cheese for not using any Parmesan in three brands that were marketed as 100 percent Parmesan. What they used instead was a mixture of Swiss, mozzarella, white cheddar and cellulose, according to the FDA.

The now-bankrupt cheesemaker is expected to plead guilty this month to federal criminal charges on food labeling violations. Michelle L. Myrter, president and co-owner of Castle Cheese, could face up to a year in prison and a $100,000 fine.

Lead plaintiff Samantha Lewin says she spent $3.99 for a product she believed was accurately labeled as pure Parmesan, only to discover otherwise, the report said.