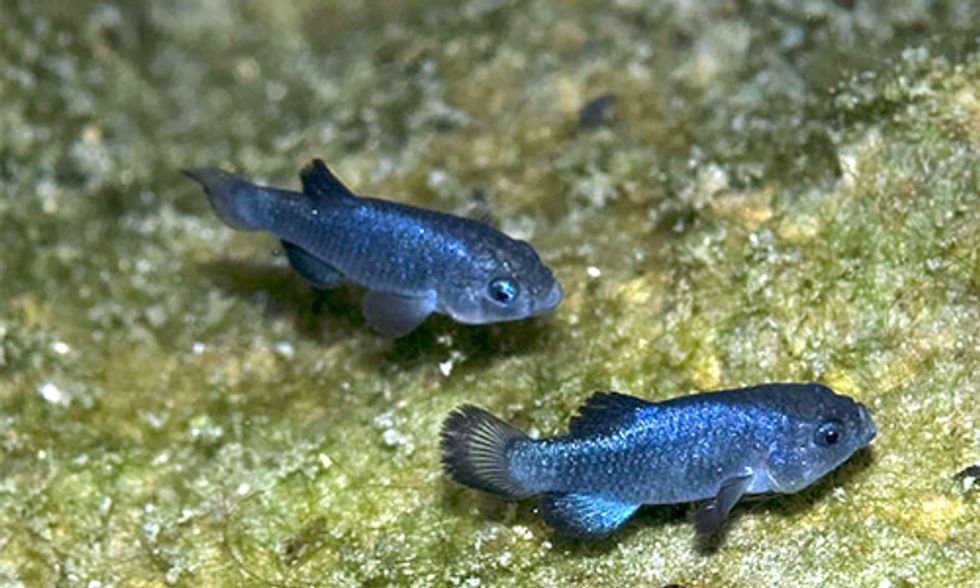 All it takes is one bad decision. And when people have been drinking, there’s ample opportunity.

On April 30, three men broke into Devil’s Hole, an ecologically fragile area of Death Valley National Park. They trashed a pool that serves as the only remaining home for the world’s rarest fish: the Death Valley pupfish.

They trashed a pool that serves as the only remaining home for the world’s rarest fish: the Death Valley pupfish. Photo credit: Olin Feuerbacher / National Wildlife Service

While these charming creatures have no natural predators, they tend to be slow-moving and easygoing—which makes them extremely vulnerable to vandalism. At least one of the fish died while the men trampled their home.

The story behind these tiny fish is fascinating. In addition to their rarity—population numbers fluctuate between 115 in winter and 500 in summer—the Death Valley pupfish were at the center of the first Endangered Species Act-related litigation to go all the way to the Supreme Court.

At issue was a question of water rights, a common dispute in California. In 1976 infuriated developers wanted access to water that environmental activists claimed was critical to the survival of the pupfish. The case set a precedent: when it comes to the Endangered Species Act, the protection of endangered and threatened wildlife will be taken seriously.

Concerned about the potential for retaliatory vandalism, the National Parks Service has fenced off Devil’s Hole, adding cameras to monitor the area. The three men who broke in attempted—and failed—to disable the cameras. Instead, the men ensured that they, along with their vehicle, were caught on film.

The drunken adventure included wading in the pool, clambering around the rocks, firing at least 1 rounds of bullets and tossing beer cans into the desert.

When the men finished, they left behind a pair of boxer shorts, vomit and discarded trash. The National Parks Service swept into gear, publishing stills—and later a full video.

The National Park Service offered a $5,000 reward to anyone who could help identify the culprits. The Center for Biological Diversity later sweetened the deal, upping it to a $15,000 reward. That extra incentive turned out to be enough to entice the public into naming those responsible.

The tipping point, it turned out, was the men’s vehicle, which was extremely distinctive thanks to its unique customizations. While the men hadn’t been arrested as of May 10, the National Parks Service was gathering material to build a case for arrest and prosecution.

Death Valley is an incredibly important and unique natural area, hosting more than 50 types of mammals, more than 300 bird species and a huge variety of fish, reptiles and amphibians. The park’s range of elevations creates distinct bands of habitat in which very unique species thrive, but disruptions to that habitat can prove devastating.

In Devil’s Hole, a truly special spot, trampling and skinny-dipping meant not just disrupting the fish, but also potentially destroying their eggs. If the summer pupfish population dips too low, it will be difficult for the fish to recover through the winter, when a small number of individuals becomes the stock required to keep the species alive.

Incidents like these are a stark reminder of the incredible fragility of so many endangered species. With a little more damage, the men could have wiped out the Death Valley pupfish species forever.