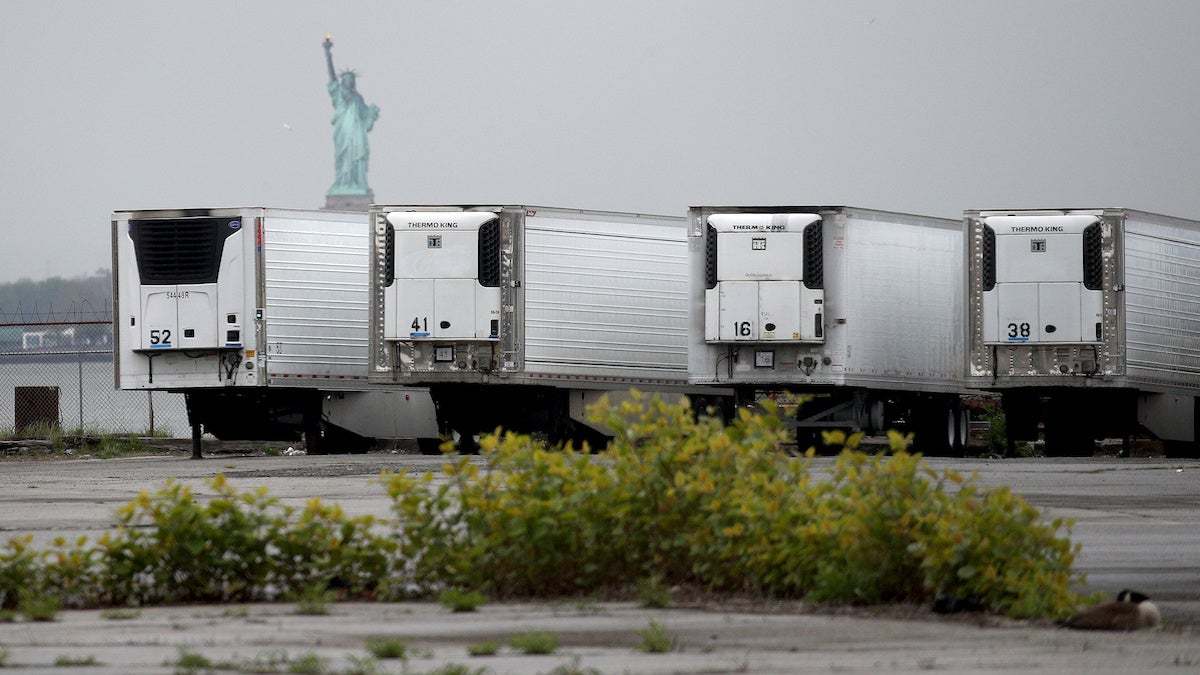 Refrigerated trucks function as temporary morgues at the South Brooklyn Marine Terminal on May 06, 2020 in New York City. As of July, the states where COVID-19 cases are rising are mostly in the West and South. Justin Heiman / Getty Images

The official number of people in the U.S. who have lost their lives to the new coronavirus has now passed 130,000, according to tallies from The New York Times, Reuters and Johns Hopkins University.

The grim news comes amidst a surge in U.S. cases. More than 50,000 new cases a day were reported several times over the past week, The New York Times pointed out. And the country still has the world’s worst outbreak with nearly three million cases, double the world’s second-highest caseload in Brazil, Reuters reported.

“I would say this would not be considered a wave,” Dr. Fauci said, as The New York Times reported. “It was a surge, or a resurgence of infections superimposed upon a baseline that really never got down to where we wanted to go.”

In the interview, Fauci said the surge could perhaps be attributed to cities and states reopening too soon.

“The European Union as an entity, it went up and then came down to baseline,” Fauci said, according to USA TODAY. “Now they’re having little blips, as you might expect, as they try to reopen. We went up, never came down to baseline, and now it’s surging back up. So it’s a serious situation that we have to address immediately.”

At least 32 states are reporting higher rates of new cases this week compared to last, according to Johns Hopkins data reported by USA TODAY.

The states where cases are rising are mostly in the West and South, according to Reuters, while cases continue to fall in the Northeast.

Arizona surpassed 100,000 cases Monday, according to New York Times data, and cases there have doubled in the past two and a half weeks. Both Idaho and Texas broke records for the most new cases reported in a single day Monday, at more than 400 and more than 8,800 new cases respectively.

.@DCHHS reports 1,062 cases. Today we are fortunate to report no new deaths; however, we do have over 1,000 new cases. The situation is that we are experiencing rampant community spread and it’s up to all of us to #FlattenTheCurve. pic.twitter.com/DRcIEG4qL6

Despite Monday’s grim milestone of 130,000 deaths, the rate of increase of deaths in the country has continued to decline, Reuters reported. However, a surge in deaths can come weeks or even months after a surge in cases, public health experts said. And at least five states have seen their death rates rise, including Arizona, which reported 449 deaths in the last two weeks of June compared to 259 in the first two weeks. As of July 3, intensive care units in the state were at 91 percent capacity, an all-time high, The Associated Press reported.

The Centers for Disease Control and Prevention (CDC) predicts that the U.S. death toll will climb to between 140,000 and 160,000 by July 25, according to Reuters. It further projects that deaths will rise in Arizona, Arkansas, Florida, Idaho, Nevada, Oklahoma, Oregon, South Carolina, Texas, Utah and Wyoming.

The surge in cases has drawn critical attention to President Donald Trump‘s handling of the crisis. Throughout the pandemic, he has made misleading statements about the risks of the new disease and the effectiveness of various treatments. During a speech on the Fourth of July, he said that 99 percent of COVID-19 cases were “totally harmless,” as USA TODAY reported.

New York Gov. Andrew Cuomo called the president out for the statement on Monday.

To fight the surge in cases, Fauci urged Americans to keep up the social distancing, since new outbreaks had been linked to large indoor gatherings.

“Avoid crowds,” he said, as The New York Times reported. “If you’re going to have a social function, maybe a single couple or two — do it outside if you’re going to do it. Those are fundamental, and everybody can do that right now.”