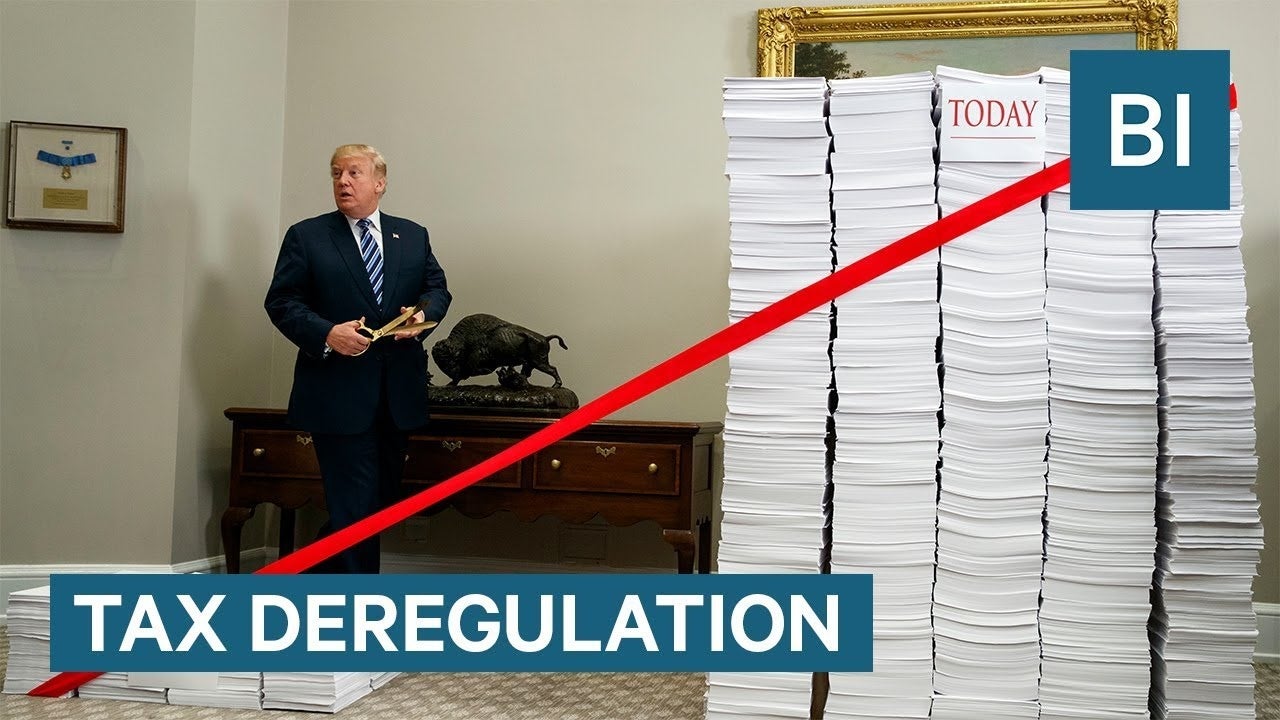 President Trump wants to set the regulatory clock back to 1960, and last week he acted it out for the cameras.

“We’re getting back below the 1960 level,” Trump declared, “and we’ll be there fairly quickly.”

There’s only one problem. That mountain of paper Trump used as a prop symbolizes hard-won measures that protect us.

To refresh the president’s memory, back in the 1960s, smog in major U.S. cities was so thick it blocked the sun. Rivers ran brown with raw sewage and toxic chemicals. Cleveland’s Cuyahoga River and at least two other urban waterways were so polluted they caught on fire. Lead-laced paint and gasoline poisoned children, damaging their brains and nervous systems. Cars without seatbelts, air bags or safety glass were unsafe at any speed. And hazardous working conditions killed an average of 14,000 workers annually, nearly three times the number today.

None of those laws, or the regulations they spawned, existed in 1960.

Trump Grew Up on Dirty Air

Trump should remember quite well what it was like in the 1960s. After all, he lived in New York, at the time one of the dirtiest cities in the country. Garbage incinerators routinely rained ash on city streets, while coal- and oil-fired power plants spewed a noxious mix of sulfur dioxide, nitrogen oxide and toxic metals. John V. Lindsay, the city’s mayor from 1966 to 1973, famously quipped, “I never trust air I can’t see,” but it was no laughing matter. On Thanksgiving weekend the year Lindsay took office, the smog was so bad it killed some 200 people.

The waterways coursing around the city’s boroughs, especially the Hudson River, were just as filthy. In 1965, then-New York Gov. Nelson Rockefeller accurately called the Hudson “one great septic tank.” Indeed, 170 million gallons of raw sewage fouled the river daily while factories along its banks treated it as a waste pit. A General Motors plant in Sleepy Hollow, 27 miles north of New York City, poured its paint sludge directly into the river. Even worse, General Electric manufacturing plants in Fort Edwards and Hudson Falls dumped about 1.3 million pounds of polychlorinated biphenyls (PCBs), a probable human carcinogen, into the river over a 30-year period ending in 1977. Since 1984, a 200-mile stretch of the river from Hudson Falls to Manhattan’s southern tip has been on the EPA’s Superfund program list of the country’s most hazardous waste sites.

Protections Prevent Disease and Save Lives

Fast forward to today. By and large, the environmental laws Congress began passing in the 1970s have been remarkably successful.

Thanks to the Clean Water Act, for example, tens of billions of pounds of sewage, chemicals and trash have been kept out of U.S. waterways since it was enacted 45 years ago. In New York City, harbor water quality has improved so much that humpback whales have returned for the first time in a century.

New Yorkers are breathing easier, too. On Earth Day last April, the city’s health department released a report announcing that air pollution in the Big Apple is at the lowest level ever recorded. Between 2008 and 2015, nitrogen dioxide and particulate matter declined 23 percent and 18 percent, respectively, while sulfur dioxide levels plummeted 84 percent after the city and state tightened heating oil rules.

That’s all good news for public health. In 2010 alone, according to an EPA study, Clean Air Act programs that reduced levels of fine particulate matter and ground-level ozone prevented an estimated 160,000 premature deaths, 130,000 heart attacks, and 1.7 million asthma attacks across the country.

These accomplishments, however, do not mean it’s time to eliminate or weaken environmental safeguards. There is still much left to do. Consider that in just one year—2015—polluters dumped more than 190 million tons of toxic chemicals into waterways nationwide; at least 5,000 community drinking water systems violated federal lead regulations; and some 116 million Americans lived in counties with harmful levels of ozone or particulate matter pollution, which have been linked to lung cancer, asthma, cardiovascular damage, reproductive problems and premature death.

Fortunately, it will be very difficult for the Trump administration to roll back 50 years’ worth of congressionally mandated rules protecting the public from industrial poisons, harmful drugs, adulterated food and defective products. Trump’s regulation czar conceded the point immediately after the December 14 White House photo op.

“I think returning to 1960s levels would likely require legislation. It’s hard for me to know what that looks like,” said Neomi Rao, director of the Office of Information and Regulatory Affairs at the Office of Management and Budget. “Deregulation also takes time. If we’re doing something consistent with the law, it takes time to reduce rules.”

In the meantime, the Trump administration is resorting to the next best—or worst—thing, depending on your perspective: It has cut back dramatically on enforcing environmental laws.

A recent New York Times investigative report compared the number of enforcement actions filed in the first nine months of the Trump EPA with what the two previous administrations did over the same time period. Under Scott Pruitt, the EPA initiated about 1,900 cases, about a third fewer than under Lisa Jackson, President Obama’s first EPA administrator, and about a quarter fewer than under Christine Todd Whitman, who directed the agency under President George W. Bush and was not known for aggressive enforcement.

The Times also found that the Trump EPA is reluctant to seek civil penalties. In its first nine months, the agency tagged polluters for about $50.4 million for violations. Adjusted for inflation, that amounts to roughly 70 percent of what the Bush EPA levied and only about 39 percent of what the Obama EPA sought over the same time frame.

To make matters worse, Pruitt is threatening to cut off funding for the Justice Department’s Environment and Natural Resources Division, which files lawsuits on behalf of the EPA’s Superfund program to force polluters to cover the cost of cleaning up contaminated sites. In recent years, the EPA has reimbursed the division more than $20 million annually.

In an apparent attempt to blunt criticism, Trump acknowledged at last week’s photo op that purging a half century of protections could have an adverse impact, and he assured Americans that he would not let that happen.

Somehow, I’m not convinced. Given the president’s penchant for lying, his administration’s abysmal track record, and now his avowed intention to kill nearly 90 percent of federal regulations, the smoke Trump is blowing is as thick as 1960s New York smog.