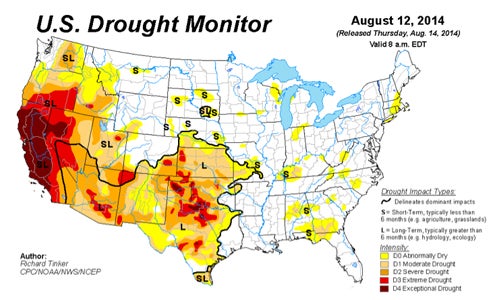 Even as we watch the stunning footage of an overwhelmed Detroit drowning under massive rainfall, U.S. Drought Monitor shows other regions of the country parched and longing for more water. The organization releases weekly maps tracking the extent of drought in the U.S., ranking regions on five levels: “abnormally dry,” “moderate drought,” “severe drought,” “extreme drought” and “exceptional drought.” 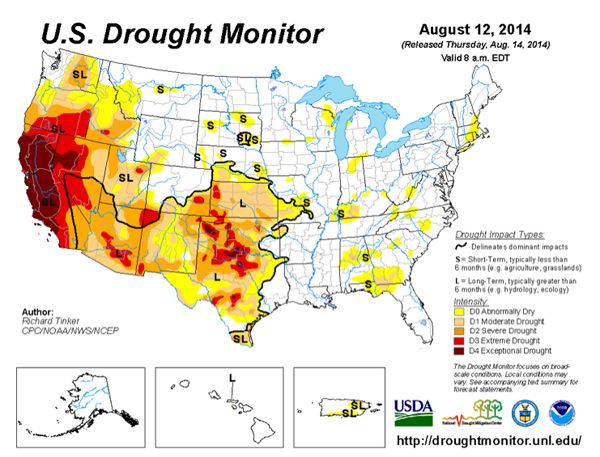 Its current map documents a huge swath of the western U.S., extending as far east as Kansas, Missouri and Nebraska, suffering from drought conditions. It also shows patches of South, Midwest, upper Great Lakes region and even New England having a drier than normal summer, covering more than a third of the continental U.S.

So it’s not surprising that all of its top ten cities with a severe water shortage are in California, located mostly in its fertile Central Valley growing region. Bakersfield, which has seen explosive growth in the last 40 years, tops the list with 90 percent of the city under “exceptional drought.” Unlike most of the other cities in the top 10, it has enacted no water restrictions. The other cities in order of the severity of drought are Hanford, Salinas, Gilroy-Morgan Hill, Santa Maria, Merced, Santa Cruz, Madera, Visalia and Fresno.

With these cities supplying a large percentage of the nation’s produce—70 percent of its lettuce comes from Salinas—the impact should be felt in grocery stores across the country.

The water shortage in these cities also points out the absurdity of California-based bottled water companies sourcing their product from local spring and tap water, and processing it to ship out of state.

Precious Water Bottled and Shipped Out of Drought-Ridden California