Top 10 Greenhouse Gas Emitters: Find Out Which Countries Are Most Responsible for Climate Change 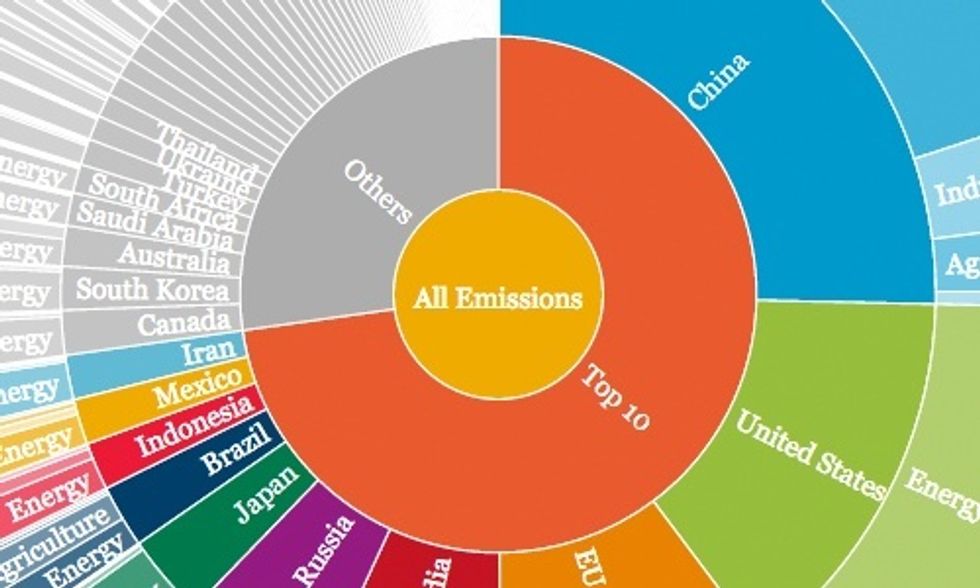 In the past couple of weeks, climate change has captured the headlines: Leaders of the G7 agreed to a decarbonization of the global economy over the course of this century; Pope Francis released his long-awaited encyclical on climate change; and Morocco and Ethiopia joined the U.S., European Union and other countries in putting forward its plans for post-2020 climate action. More countries are expected to release their own post-2020 climate commitments in the coming months, and all of these actions set the stage for a new international climate agreement to be finalized at the COP 21 climate summit in Paris in December 2015.

But before we look ahead, it’s important to also fully understand the current state of global emissions.

Leveraging data from World Resources Institute’s CAIT Climate Data Explorer, the dynamic graph below allows you to explore just-released CAIT emissions data for 2012 by country and economic sector, and share this information on social media.

This picture of global emissions tells a number of stories:

Emissions sources vary by country. While the energy sector dominates, industrial emissions in China contribute more than 3 percent of global emissions and new data from the UN Food and Agriculture Organization (FAO) indicate that agriculture contributes a notable share of Brazil’s and Australia’s emissions. Mitigation policy options that countries pursue should therefore align with their national circumstances.

Six of the top 10 emitters are developing countries. According to the data, China contributes approximately 25 percent of global emissions, making it the top emitter. India, Indonesia, Brazil, Mexico and Iran are also contributing relatively large shares of global emissions as their economies grow. Although developed countries used to dominate the list of top 10 emitters, the visual represents the changing emissions (and geopolitical) landscape. It is important, however, to consider a range of indicators that help differentiate the responsibility and capability of countries to act.

To learn more about global emissions, visit WRI’s CAIT Climate Data Explorer. Data is available for 186 countries and multiple sectors and gases, and spans 162 years. With this latest update, we incorporated 2012 emissions estimates and updated all our emissions indicators with the latest releases from our data sources. One particularly noteworthy change—emissions from agriculture are now sourced from the FAO. Please see our updated Country Greenhouse Gas Emissions Documentation for all updates on our methodology.

In addition to historical emissions, CAIT also offers a variety of tools to explore other dimensions of climate policy, including an INDC Tracker, Emissions Projections and Equity Explorer.