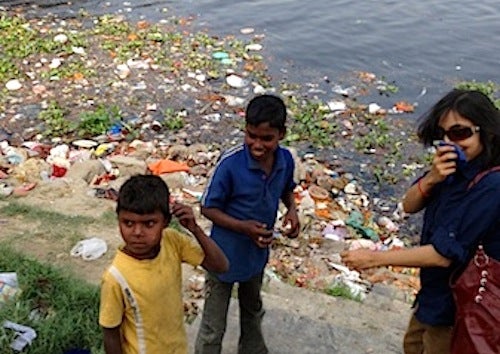 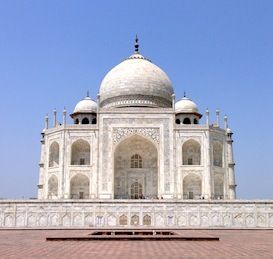 Hundreds of thousands of tourists flood into the city of Agra, India, every year to see the gleaming marble of the Taj Mahal, a site immaculately kept since its completion in 1653. Emperor Shah Jahan, who had the Taj Mahal built as a tomb for his wife, kept the reflecting pools filled with water from the sacred Yamuna River that flows just meters from the Taj Mahal’s northern walls. During that time, royal visitors to the tomb could enjoy watching egrets fish among reeds and children play in the pristine waters. Today, tourists are quick to turn away from the black, lifeless waters of the Yamuna.

Ashwini Kumar Mishra, the cheery priest of a small Hindu temple and native of Agra, has taken up the mantle to fight for the Yamuna as the Mid Lower Yamuna Riverkeeper. Government incompetence and corruption, coupled with law-breaking, profit-driven industry, have defiled the Yamuna’s sacred waters almost to the point of oblivion. He, along with his congregation and volunteers, has been working for years to spread awareness about water pollution and to pressure the local government to take necessary action on the Yamuna.

In 2010, Mishra succeeded, through petitions and peaceful protests, in forcing the local government to begin construction on a series of lagoons that serve as a natural treatment system for sewage in western Agra. Before his campaign, thousands of gallons of raw sewage would empty straight into the Yamuna before flowing past the Taj Mahal.

“This is what the entire waste canal looked like before 2010,” Mishra said, pointing to the head pond of the treatment system. It was black and rank, an open sewer for the surrounding communities. But as Mishra walked me along a dirt path that follows the snaking lagoons, the stench was replaced by an earthier, wetland smell. 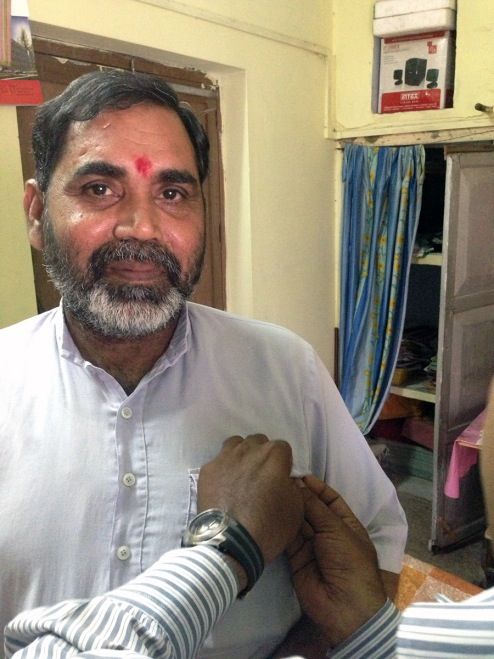 Three years on, the lagoons form a six kilometer network of thriving wetlands. As Mishra gave us a tour of the first three kilometers, I saw dozens of bird species, including a kingfisher and a peacock—India’s national bird—and heard the steady hum of a thriving insect population. In several of the lower lagoons, fish broke the water’s surface as they came up to feed on  insects.

Still, this is only a small piece to the puzzle. The Yamuna, the largest tributary of the Ganges River in northern India, is an extremely sick river. Running 1,376 kilometers (855 mi) from its origin in the Himalayas, the Yamuna is depended upon by tens of millions of people for water.

Even though Mishra organizes numerous riverside cleanup events with thousands of attendees, many of whom are devotees at his temple, the Yamuna’s riverbed is parched in many places, blanketed with trash, debris and illegal laundry operations. What remains of the Yamuna’s once mighty flow is a black, noxious stream that offers little comfort to the livestock, children and stray dogs that can be seen wading through it on a hot afternoon.

“It used to be as wide as several superhighways and now it is barely as wide as a two lane road,” said one of Mishra’s friends, a native of Agra. “We used to swim in there as children, whole packs of us. Now only the poor children swim in there to bathe … and they don’t know any better about the health risks.”

Industrial pollution and sewage are immediate problems, but much larger issues sit upstream: dams and diversions. These are especially complex problems as India tries to feed and power its burgeoning population. 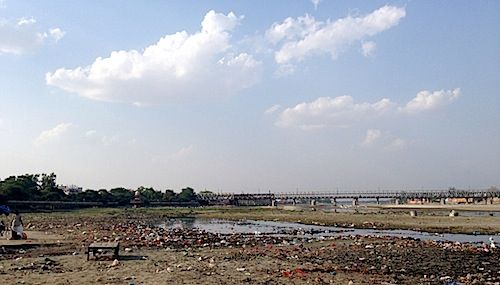 The Yamuna’s parched riverbed covered in trash and debris, Agra.

Arora and Singh took me to a stretch of the Yamuna located between two thermal power plants in the south of New Delhi. A small barrage sits under a bridge crossing the Yamuna and the overflow spills down a modest three foot drop. The black water is so heavily polluted that it froths up into little foam icebergs that continue downstream. Unfortunately for clean water advocates in New Delhi, this part of the Yamuna contains little fresh water to begin with. Farther upstream, a series of large barrages divert most of the water towards agricultural and industrial use. The flow that enters this length of the Yamuna is composed almost entirely of untreated wastewater from 16 massive pipes that carry the city’s sewage.

After trekking along this stinking stretch of the Yamuna for several kilometers in the scorching heat, the three of us took a seat in the shade near a highway turnoff. Every minute or so, a car would pull up and a passenger would take a plastic bag of trash out of their trunk. Some would walk over to the river embankment and hurl the trash, still in the bag, directly into the river. Others would wait for a half-naked man to come up the embankment from his boat and do the deed for them in exchange for several rupees.

“See the high fence they built along that bridge,” said Kesar, pointing up to a 10 foot wall of mesh wire that ran the entire span of the bridge, “they built that so people would stop throwing trash bags out of their car windows into the river.”

“Throwing organic waste into the sacred Yamuna River for it to wash away is an old tradition among Hindus,” Arora explained to me back in the bustling heart of New Delhi, “But now much of the waste is inorganic and doesn’t degrade. It is also traditional for people to dispose of bodies in the river. Now the river hardly flows and the population has exploded. So the river can no longer serve as it did once. But traditions stick and people keep defiling the Yamuna. Government campaigns to curb this have had little effect.” 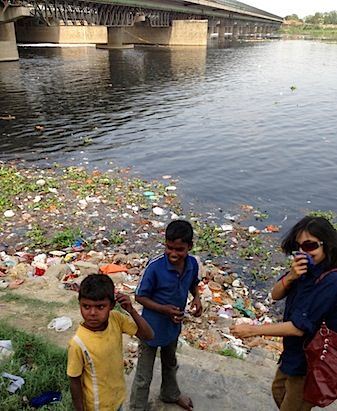 Another well-known river activist, Sudhirendar Sharma, sat down with me over chai tea and told me about Balbir Singh Seechewal, a famed river activist in the state of Punjab. In 2007 Seechewal initiated a campaign to clean the Kali Bein, a 160-kilometer-long stream sacred to Sikhs, with the help of thousands of community members. Encroachment by farmers, silt deposition and pollution from wild growth had virtually obliterated the Kali Bein. But under Seechewal’s leadership, volunteers dredged the stream bed and cleaned the stream bank. Under pressure from the movement, towns along the stream’s course stopped dumping raw sewage into it. The government of Sultanpur Lodhi, the largest city the Kali Bein runs through, agreed to build a sewage treatment plant for the urban waste fouling the waters. The Kali Bein’s transformation was stunning and Seechewal continues his fight for clean water to this day.

Sharma told me this story to highlight the importance of victories on smaller water bodies in India. Because the issues facing large rivers such as the Yamuna are so colossal, and almost impossible to remedy without a concerted, multi-year effort by the government, he recommended focusing on smaller rivers and streams where more tangible victories might be won.

I was saddened to see the state of some of India’s most sacred waterways up close, but I was also encouraged to meet such passionate activists that are working to change the status quo. Indeed, as Waterkeeper Alliance and other domestic and international environmental organizations continue to support the work of clean-water activists in India and across the rest of Asia, I am hopeful that change will come, if slowly, and people will once again be able to enjoy their right to swimmable, drinkable, fishable waters.