The Great March for Climate Action 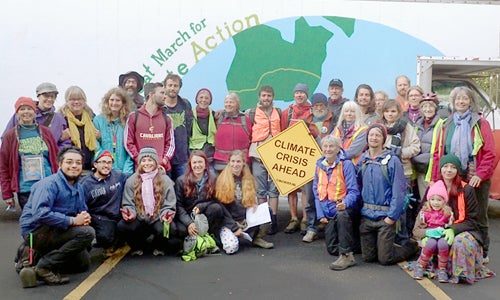 Uncharacteristic Los Angeles rains weren’t enough to dampen the spirits of The Great March for Climate Action at the launch of this epic journey. Luckily, there was a break in the rains long enough for a dry and inspiring rally at Wilmington Waterfront Park. Behind the stage, stretched across the horizon, towered an oil refinery and the Port of Los Angeles. More than 1,000 people were in attendance at the launch, and the group departed with the marchers to walk the first 2.5 miles. The power of hundreds marching in the streets brought local residents to their windows and yards in support.

The launch of the march was relocated from the affluent Santa Monica to the Wilmington community in Los Angeles struggling with the negative health effects from the area’s local oil refineries. The SoCal Climate Action Coalition that hosted the rally for The Great March for Climate Action launch requested that the march start in Wilmington following a decision by local refineries to move from refining 25,000 barrels of tar sands a year to 60,000 barrels a day without public comment. Valero withdrew their permit to ship tar sands into Wilmington later that month.

The Great March for Climate Action has marched more than 2,700 miles through flashfloods, blinding dust storms, excessive drought and crop-crushing hail worsened in many cases by increased greenhouse gases in the atmosphere. The Climate March began its journey on March 1 in Los Angeles and will end in Washington, DC on Nov. 1. Marchers are walking 3,000 miles, away from family, friends, work and school, to inspire and organize action to address the present and growing threat of climate change on local, national and global levels.

“Walking across the country for climate action has taken many steps—around 7 million,” said spirit marcher, Jeffrey Czerwiec. (A spirit marcher, or spirit walker, is one that has taken every single step in the journey). “Perhaps more impressive than that figure is that with each step along the way we bore witness to both the climate injustices and the local heroes that are taking extraordinary actions for their community and, in the end, the entire planet.”

It is difficult to measure the long-term success of this march, but in the short-term the march is connecting activists in and across communities, and injecting new energy and inspiration to keep local fights going.

In Nebraska, the marchers organized an event with Bold Nebraska to shine light on the Keystone XL pipeline and mark the march’s crossing of the pipeline. While marching through Nebraska, a decision was made by the State Emergency Response Commission and the Nebraska Emergency Management Agency to protect oil companies by refusing to disclose which toxic chemicals were being transported via rail through Nebraskan communities.

Again, the marchers collaborated with Bold Nebraska to collect signatures in support of oil train and pipeline transparency that were delivered to Gov. Heineman on July 24 in Lincoln. Marchers carried the petition from town-to-town along the route, informing citizens and collecting signatures to demonstrate the citizens’ desire to know what dangers they face. The march hoped to heighten Nebraska’s awareness of oil trains and inspire people to take action to protect their communities—and they did. The information was released to the public weeks later due to the increased pressure.

A similar situation arose in Iowa, when an announcement was made about a proposed Bakken crude oil pipeline that would run through the heart of the state. The pipeline would disturb 17 counties, thousands of landowners and provide an additional threat to Iowa’s already compromised water supply. Marchers organized with advocacy groups and held a Bold Iowa Town Hall meeting, which successfully kicked-off public discussions and landowner rights education.

These examples are merely a sampling of the astonishing accomplishments of The Great March for Climate Action and its dedicated supporters. The tens of thousands of interactions and conversations enjoyed along the way are immeasurable, but crucial to the understanding of the effects of climate change. Marchers have been gathering stories from across the country of hardships from anthropogenic climate disruption. On Nov. 1, marchers will portray and represent theses stories in DC.

“It takes a community of hard working climate advocates to move a March of this magnitude across the country,” said Ed Fallon, marcher and founder of the Great March for Climate Action. “For me personally, walking every step of the way is emblematic of the kind of determination and sacrifice needed to move our country forward to grapple with the climate crisis.”

On Nov. 1, the March will meet supporters in downtown Bethesda to march for the last and final day into Washington, DC. At 1 p.m. they will hold a rally at Lafayette Park to highlight stories from the marchers about their experiences along the way. Dinner and a celebration will commence at 6:30 p.m. at St. Steven’s that evening, signifying the end of the eight-month march. Updates are available at www.climatemarch.org/dc for all those who want to join in the triumphant arrival.

It is yet to be determined what will come in the wake of the march. Some marchers plan to return to their homes and fight local issues while others will continue their work as part of the Climate Reality Leadership Corps and 350.org groups. Many will remain in DC to participate in a week of actions organized by a large coalition of environmental organizations, called Beyond Extreme Energy. The goal of Beyond Extreme Energy is to draw attention to the agency’s disregard for the environment and the voices of the people.

The marchers walking one day or more represent 37 different states and range from 3 to 83 years of age with a core group of around 50. Hundreds of other marchers have walked portions of this route to demand action on the climate crisis.