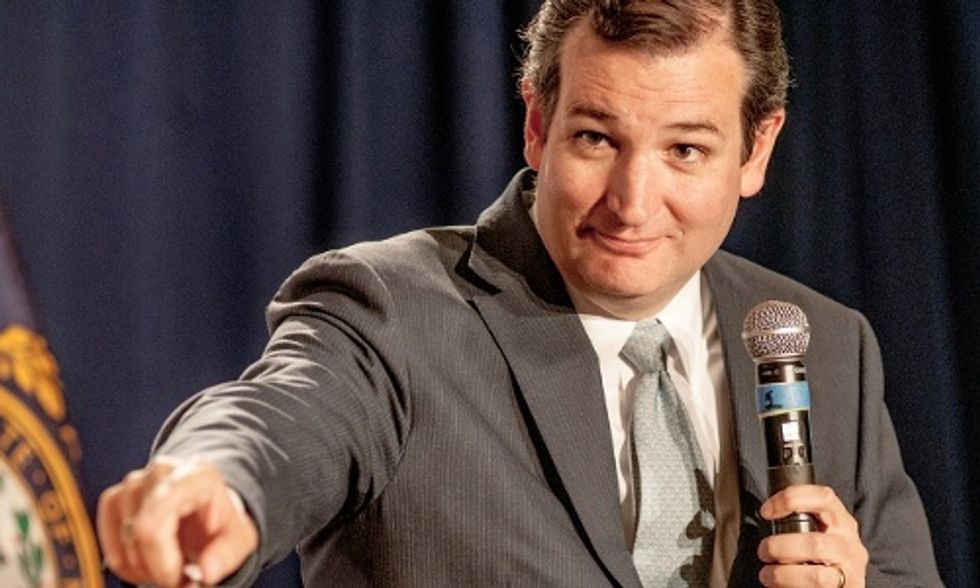 He's not a scientist, but Ted Cruz will be glad to tell even scientists they're wrong for thinking climate change is real.
Photo credit: Shutterstock

But when Cruz talks about the climate, many people feel he sounds like the most ignorant and fact-challenged of his far-right followers.

Last week, as destructive floods swept his home state, killing more than two dozen people and destroying hundreds of homes, Cruz said, in response to a question about the role of climate change in the floods, "At a time of tragedy, I think it’s wrong to try to politicize a natural disaster." Never mind that climate scientists in Texas and other places think that, far from "politicizing" the disaster, talking about climate change is the first step to finding a solution and protecting people from the impacts of climate change.

“As a scientist, I think it is essential to connect the dots between climate change and the increasing risk it poses to our families and communities,” Katharine Hayhoe, an atmospheric scientist at Texas Tech University, told ThinkProgress in response to Cruz's attempt to disconnect the flooding from climate change. “Keeping our mouths shut on what the data is telling us, even if it’s in fear of vicious reprisals, is like a physician not telling a patient they have a dangerous condition just because they’re afraid of the patient’s reaction.”

"The science isn’t political,” she said. “It’s the solutions that are political.”

In a recent TEDxTexas talk, Hayhoe explains how today's warming caused by carbon emissions makes weather extremes more likely and more severe than they were in the past:

Michael Mann, director of the Earth System Science Center at Pennsylvania State University, suggested that Cruz might have ulterior motives for his persistent and outrageous climate denial statements, motives that could include the nearly 1 million dollars in campaign contributions Cruz has received from the oil and gas industry—his largest funder after Republican and conservative political groups.

“The ones politicizing the matter are those like Cruz who coddle their fossil fuel funders by denying the science of climate change and smearing those who attempt to point out the very real and damaging impacts climate change is already having,” Mann told ThinkProgress. “It is shameful and history will judge it as such.”

Cruz has a lengthy track record of politicizing climate science to push for policies that favor the fossil fuel industry.

Earlier this year, Cruz called California Gov. Jerry Brown, who has been working on strong new regulations on cutting fossil fuel emissions and increasing energy efficiency in his state and hammering our climate agreements with other government leaders, a "global warming alarmist" who doesn't want to look at what Cruz called "real data," although that apparently doesn't include the work of the 97 percent of climate scientists who accept that human-caused global warming is indeed real.

Days later, Cruz ratcheted up his rhetoric and his politicization of climate change, saying "global warming alarmists are the equivalent of flat-earthers" who are making "apocalyptical claims."

"You know it used to be it [was] accepted scientific wisdom [that] the Earth is flat, and this heretic named Galileo was branded a denier,” said Cruz.

When he wasn't busy telling interviewers that the climate scientists are wrong and that he and his ilk are the equivalent of Gallileo, he was embarrassing himself in a hearing of the Senate Commerce Subcommittee on Space, Science and Competitiveness, of which he happens to be chair. When NASA administrator Charles Bolden attempted to explain why the space agency studies climate change, Cruz retorted, "I would suggest that almost any American would agree that the core function of NASA is to explore space. That’s what inspires little boys and little girls across this country. It’s what sets NASA apart from any agency in the country. I am concerned that NASA in the current environment has lost its full focus on that core mission.”

Cruz's fellow Senator Gary Peters, a Democrat from Michigan, backed Bolden, saying, "The chairman has mentioned that he wants science to drive the process here. Here we have leading experts in our country on science saying that the cuts that we saw in Earth sciences were disastrous in the Bush era.”