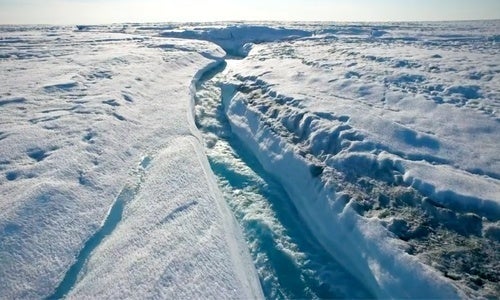 A team of scientists are working on a project in Greenland, the results of which could provide “groundbreaking information” on just how fast the ice mass is melting, reports The New York Times.

The only place with more of the world’s ice than Greenland is Antarctica. But Greenland is warming twice as fast as Antarctica, and this rapid melting is raising global sea levels at an alarming rate—even faster than expected. In August, Jakobshavn—Greenland’s fastest-moving glacier and one of the fastest melting in the world—may have lost its largest chunk of ice in recorded history.

But this team of scientists says almost all of the current research is done by analyzing satellite images and creating models to simulate the thawing. There is very little on-the-ground information, which is key to predicting just how quickly sea levels will rise.

So this summer, they headed to Greenland to conduct the first comprehensive measurements of the rate of the melting sea ice. The scientists plan to use the data, which will be published in the next few months, to test if current climate models are accurate.

Until then, you’ve got to check out this astonishing drone footage from The New York Times’ Josh Haner, which capture Greenland’s rapid melting: