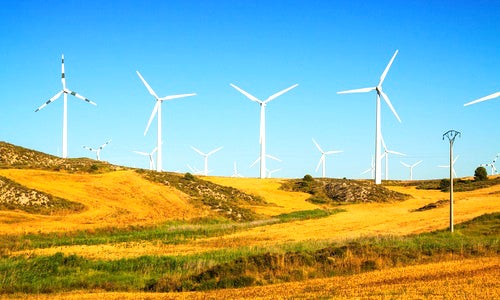 Wind energy is now king in Spain, officials revealed in a recent report.

Wind power narrowly beat out nuclear in 2013 as the top source of energy, according to Red Eléctrica de España (REE), the transmission agent and operator of the Spanish electricity system. Wind met 21.1 percent of the country’s demand, compared to 21 percent for nuclear.

“Throughout 2013, the all-time highs of wind power production were exceeded,” according to the report. “On Feb. 6, wind power recorded a new maximum of instantaneous power with 17,056 megawatts (MW) at 3:49 p.m. (2.5 percent up on the previous record registered in April 2012), and that same day the all-time maximum for hourly energy was also exceeded reaching 16,918 MW hours (MWh).

“Similarly, in January, February, March and November wind power generation was the technology that made the largest contribution towards the total energy production of the system.”

Renewable energy also accounted for a whopping 49.1 percent of total installed capacity on the Spanish peninsula. That figure was encouraged by increases of 173 MW and 140 MW for wind and solar, respectively.

Overall demand in the country dropped by 2.1 percent. Emissions decreased by 23 percent.

Spain experienced similar success with renewables in 2012, when wind met a record 64.2 percent of the demand on a September night.